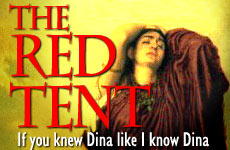 A popular novel characterizes the founders of the Jewish people as full of intrigue, lust and deceit. Should that bother us?

Unless you're writing historical fiction.

The Torah (Genesis 34) tells us that Dina, Jacob's only daughter, is forcibly taken and raped by a powerful prince. Her brothers, unbeknown to their father, free her in a surgically planned guerilla strike.

In the surprising best-selling book, "The Red Tent" by Anita Diamant, it appears that "no" may very well mean, "yes." Diamant retells the story as the blending of two cultures and the desire of a woman to find love at any cost. Dina was not raped, says the author of "The Red Tent." Rather, she eloped and intermarried, throwing caution to the wind, allowing herself to be swept off her feet, guided by her heart and her love.

Dina seems to check her brain at the door, looking for love in all the wrong places.

While this depiction may be heartwarming and romantic, it reduces Dina to a character in a Harlequin romance novel, portraying her as little more than a mindless, love-starved girl.

Diamant gives our matriarchs the flawed portrayal of someone living in the 21st century, and makes a number of significant errors:

To ascribe these attributes and failings to our ancestors shows not only a lack of knowledge in Jewish history, but also an ignorance of sociology. We do not believe that our ancestors (or any human being) to be perfect. They, as we, had flaws and made mistakes. However, the issues we have today certainly were not theirs.

Intermarriage may be an issue for us. It is a serious and dangerous problem that eats away at the core of our people. But it was not an issue for Dina, a prophetess who was prepared to die for her beliefs.

Can someone who actually spoke to God doubt His existence?

The Torah details how Jacob chastised his sons for killing the men of Shechem. Even on his deathbed, he let them know how this act went against his way of life and how it embarrassed the entire family.

Every Bar/Bat Mitzvah child knows that our forbearers possessed faith beyond our comprehension. What about the 10 great tests of Abraham, where he was willing to give up everything for the sake of Jewish ideals?

To give our forefathers the same doubts that many of us have concerning the existence of God and what He wants is simply too far-fetched. We struggle with these issues. We can study, learn, question and investigate the teachings of Judaism to find the answers. We look at the Holocaust and question, and we look at the world today and question. We try to get answers. But to ascribe those same doubts to our ancestors who spoke to God, who saw the burning bush, who experienced the Exodus and countless other miracles is deeply mistaken. These are our issues, not theirs.

Anita Diamant is clear from the beginning that her work is fiction. So if she never claims the story to be true, what's the big deal about "The Red Tent"?

We cannot accept that our forefathers, even in fiction, could be petty, could be murderers, could be willing to throw away the relationship they fought so hard for with the Almighty.

Our tradition teaches that our forbearers were judged with extreme precision, because they were on such a high level.

Even the "red tent" in the story, a place to which women were cast off during their menstruation cycle and men never ventured near, has no basis in Jewish belief or history. It says more for today's questions about equality of the sexes, than in biblical times, since the red tent never existed. Perhaps the author invented it to figuratively create a "women's club." But nevertheless, she created it.

If Diamant had written about 14th century Ireland or 20th century Canada, this would not present a problem. Her story is compelling and grabs the reader from the first page. But the novel is not about those times. It is about the people who fought and struggled to bring monotheism and eventually Judaism into the world and to make it a better place.

Only sheer audacity would enable an author to rewrite the history of a nation's seminal figures, tarnishing the name of Judaism's noble ancestors. They were fallible, but they were giants. Even historical fiction must be based on history. And in this, she fails.

Rabbi Avram Rothman is the Rabbi of the Thornhill Community Shul in Ontario, a thriving Shul dedicated to the mission of Aish International. He received his Rabbinic ordination from Rabbi Y.Y. Ruderman of Ner Israel Rabbinical College in Baltimore, an MS in Guidance & Counseling from Johns Hopkins University, and a PhD in Comparative Literature.

Sidney Poitier and the Jewish Waiter who Taught Him How to Read
The Promise Of The Land
Which Chat Are You On?: Parshas Behar/Lag Ba’Omer
Do You Like Slow-Cooked Food? Thank the Jews
Comments
MOST POPULAR IN Arts
Our privacy policy