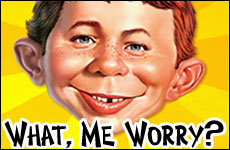 My kindergarten teacher tried to teach me how to "turn my frown upside down." I wish I had listened.

It's summertime – the carefree, relaxed, get-ready-for-vacation season, right? Not quite. This summer, feeling lighthearted is a tough go, since bad news reaches out to scare us silly from every newspaper, radio and web site. The economy is imploding, oil prices are skyrocketing, and nations claiming to want peace with their neighbors have a mighty odd way of showing it.

And if this weren't all frightening enough, Starbucks is closing 600 stores, which will force us to walk as far as four blocks – perhaps even five – before hitting one of their caffeinated outlets. Additionally, as many as 25 percent of all hotel beds are now thought to contain bedbugs, a disgusting thought made only less disgusting if you have had to cancel your summer vacation because you can no longer afford to stay in a hotel. Finally – prepare yourselves for a shock – Madonna, the "great Kabbalist", is rumored to begin divorce proceedings against her movie-producer husband of seven years. (Could it be the famed seven-year-itch? Or could it be a deeply kabbalistic notion that Hollywood megastars may not remain married longer than seven years?) It's all enough to make you want to go to a remote cabin where you can have no possible link to news from this planet.

Naturally, Jews are hit hardest by all these dismal dispatches, because we are a people whose worry glands always work overtime. Most Jews have never met a piece of information that didn't cause anxiety or acid reflux. As a kid, I viewed with amazement and awe the photo of Alfred E. Neuman, the mascot of Mad magazine, whose famous motto was "What? Me worry?" Neuman sounded like a Jewish name, but could he really be Jewish if he wasn't brooding and bedeviled?

My grandmother, whose Jewish lineage has never been questioned, single-handedly worried enough for everyone in the state of New Jersey, even though half that state's residents were themselves Jewish. But should we resign ourselves to our fate as congenital worriers? Not so fast, boychicks and girlchicks. A long time ago, I was shocked, shocked I tell you, to discover during my first serious face-time in a Torah class, that Jews are not supposed to worry about anything, because the Almighty was in charge, and frankly, He had more management experience than any of us. Wow, I thought, was this a great religion or what? Sure, sticking closer to Jewish tradition meant saying adios to non-kosher restaurants and Saturday matinees, but if I could lose that sense of perpetual Jewish fretfulness, I'd make that trade-off happily.

Sure, sticking closer to Jewish tradition meant saying adios to non-kosher restaurants but if I could lose my sense of perpetual fretfulness, I'd make that trade-off happily.

Maybe if I got really good at this not worrying thing, I'd eventually have a painless "angst-osuction," not even requiring a fight with my insurance company to pay for it. I began to suspect that Alfred E. Neuman must have secretly studied Torah when he wasn't posing for Mad magazine. Any guy with those giant ears, cockeyed eyes and missing his front tooth who could still boldly grin that goofy grin for a magazine cover must have known something I didn't know.

I may have been genetically programmed to stew over things that hadn't yet happened and might never happen, but it doesn't have to be that way. I'm going to re-wire my DNA from Distressed, Nervous and Anxious to Do Not Agonize.

Instead of obsessing about problems, I'm going to focus on their possible positive effects. So, for example, the high cost of fuel and the closing of 600 Starbucks outlets may have been brilliantly arranged by the Almighty because we all need more exercise, and now we'll have to walk at least a mile to get a dark Sumatra blend. The bedbug problem? Maybe God doesn't want us staying in Motel 6's anymore! Madonna's divorce? Maybe there was an underemployed divorce-attorney-to-the-stars who needed work and who will give a big hulking chunk of his fees to tzedakah!

In the meantime, I'm turning the main news section of my daily paper face down. I can't change the economy, the environment, or the minds of deranged foreign leaders. Heck, I can't even change the oil in my own car! So I'm going to enjoy my summer after all, and try not to worry about those ultraviolet rays at the beach. Or the fact that our air conditioner is about to blow. Or that I have a funny mark on my skin. Or...

Judy Gruen is the author of three award-winning humor books. Her latest, The Women's Daily Irony Supplement, was named ForeWord Magazine's Book of the Year for humor. Read more of her work on www.judygruen.com.
Like What You Read?  Give Jews around the world the chance to experience engaging Jewish wisdom with more articles and videos on Aish. It would make your mother so proud and as a nonprofit organization it's your support that keeps us going. Thanks a ton!

Israel Bids for 6000 Summer Olympic Games
In the Shadow of David and Goliath
Where Do the Laws of Nature Come From?
Saadiah Gaon, Rashi and Maimonides: How Three Rabbis Revolutionized Judaism
Comments