Message in the Sky 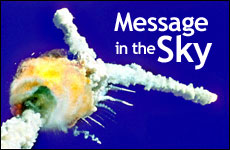 When the unthinkable happens.

I don't remember much of the blurred watercolor of my childhood, but that day is indelibly marked in my memory.

"You know kids, there's a shuttle lift-off at Cape Canaveral today," my father said. We groaned. We were on a rather hyped up trip to Disneyworld, one that my family had waited years to take. Disney, Epcot, MGM -- the world of fairy tale entertainment held no boundaries for us that week. For us three sisters, with me, then 12, the eldest, the space center wasn't much of a contender. But Daddy was always a fabulous educator, even on vacation.

"Okay kids!" my parents said excitedly. "Let's go to the Kennedy Space Center!" We drove down a long highway lined with yellow fields. It was January 28, 1986.

"Are you ready for take-off?" a voice asked into a microphone.

"We sure are," one of the astronauts answered on the broadcast system set up near the spectators.

I wondered which voice belonged to Christa McAuliffe.

I listened to the voices of the astronauts as I stood by the water's edge, peering into the infinite sky, imagining myself hurling through space on a rocket-ship. I had goose bumps.

I wondered which voice belonged to Christa McAuliffe. I had read all about her in my weekly reader at school. She was to be the first teacher in space. We had seen pictures of her training, floating in a weightless chamber. I craned my neck to see if I could find her family, but even my tiptoes didn't help. I could only see the spacecraft, mammoth and lonesome on a small island in the middle of the water.

"10-9-8-7-6-5-4-3-2-1" The water was blue and the sky even bluer as the shuttle lifted off, leaving behind smoke like clouds of wadded cotton. The crowd cheered. My father smiled and clapped as he listened to the radio through his headphones. I saw a burst of orange on the right side of the craft.

"What was that?" I asked my father nervously.

Then there was another burst of orange, and two plumes of smoke arching through the air like flower petals. Then nothing.

"What happened?" I asked. My father fiddled nervously with his radio and everyone around began speaking in hushed tones, pointing, wondering.

"There seems to be a problem," my father said. He looked at my mother and squeezed my hand.

"This can't be." I heard one woman say. "No, impossible. There must be some sort of a mistake." But the unthinkable had happened. The Challenger had exploded, killing all seven astronauts on board.

I looked up, shielding my eyes, waiting to see some sign of life, but I could only see straggly lines of smoke falling like a newly hatched firecracker. I imagined Christa McAuliffe floating in the weightless sky as my mouth clenched with fear.

"Do you think the debris might fall on us?" I asked. I wondered where the astronauts were now.

The crowd dispersed amidst somber tones, some crying or leaning on each other for support.

"What happened?" my sisters asked.

"A very unfortunate thing happened sweetie," my father answered. We peppered our parents with questions, but what could they say? Eventually, we got back into our rental car.

"Come on kids," my father said with forced cheer. "Let's go to Disneyworld."

My sisters, ages six and seven, were able to move on rather quickly. I sat in the back seat, holding my stomach as it clenched and unclenched. I just heard their voices, I thought. How could this have happened?

I can still taste the feeling of walking around Disneyworld in a trance, watching the throngs picking off snatches of the pink cotton candy of life, while I had just returned from a bleak pit in history just miles away. How, I wondered, could people move on so quickly? How could they smile and laugh in the face of such gruesomeness?

I rationalized to myself that these people did not have relatives aboard the craft. And they had not been there to see its disintegration. They were not haunted as I was by the cheerful sounds of the astronaut's voices moments before their collective demise. And so perhaps they were justified in their oblivion.

But there was something deeper at stake here.

When the children of Israel were taken out of Egypt and the Egyptians were drowning in the sea behind them, the Angels lifted up their voices and sang a song to God. The Medrash says that God rebuked them for their behavior. "My creatures are suffering and you sing songs?"

Some small part of us should be wondering, "What does this mean to me?"

And as the 12-year-old me rode through Peter Pan's fantasy, I wondered, Why was I such an intimate witness to this tragedy? What am I meant to take out of this experience? Since I was there, I must be obligated to give more than just a moment of silence. It was a deeply disturbing thought, as I had no idea what to do.

Life in this world is a multileveled experience, every physical experience reflecting a spiritually proportionate message. There are spiritual messages dangling all around us; all we have to do is reach our hands up and pluck them off the tree.

But we are sometimes too busy in Disneyworld to pay attention to the cues. As Rebbetzin Tziporah Heller teaches, we are all often afflicted with the "Pass the Salt" syndrome. Imagine a dinner table:

"Can you believe it about the bomb in the school down the block?"

"Yeah. I heard the explosion all the way here. Crazy that there was nobody in the school at that moment. Five minutes later and it would have been a disaster."

"Whew. Yeah. Could you please pass the salt?"

'Pass the Salt' is how we pass the buck on spiritual change.

But what if we decided to take it one step further?

I witnessed something inspiring, difficult, cataclysmic -- and there is a message in this for me. Maybe I should be more grateful for my own life? Maybe I need to appreciate the people in my life more? Maybe there is a change in me that is begging to be made?

The way that we react to the awesome things that happen in the world around us, speaks volumes about who we really are.

Witnessing the Challenger disaster was a first step for me in grasping the ephemeral nature of life. It was a difficult and distressing topic to assimilate, but it was the beginning of a quest which led me to more intense religious commitment. I couldn't shut it out of my mind and I'm glad that I didn't.

When the world around us seems chaotic, let's open up our eyes really wide. We may just see the writing on the wall that was meant just for us. After all, life can provide a whole lot of flavor even without the salt.

Where Are You Going?

Dr. Henry Heimlich and Being Someone's Angel
The 21st President of the United States: Failure or Inspiration?
Hiding Their Jewishness
The Jewish Pope: Following the Questions Home
Comments
MOST POPULAR IN Spirituality
Our privacy policy
Aish.com Is Looking for Great Writers