Passover: Rising from the Ashes 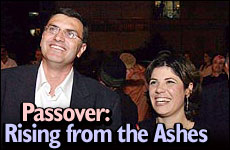 Why I will never forget David Chatuel.

During the bloodiest months of the Intifada, barely a week passed that from my living room I did not hear a bomb explode. The front of the war that was being waged against the Israeli people was not in distant Lebanon, or Syria, or along the Jordanian border. The front was located in the bus my husband rode to work, in the market where I did my Shabbat shopping, and at the neighborhood playground where I spent my afternoons watching my young daughters swing and slide and play.

Throughout those scary years, every time I had to exit the front door of our apartment in downtown Jerusalem, I felt as paralyzed with fear as a person forced at gunpoint to walk blindfolded through a minefield.

But the terror attack that hit closest to home did not take place in Jerusalem at all. The attack took place on May 2, 2004 when an Arab approached the car of Tali Chatuel and shot her and her four young daughters, point blank, twice in the head, and then riddled their bodies with dozens of bullets.

In one moment, David Chatuel, an idealistic elementary school principal and devoted father and husband, was left bereft of his whole family, his 34-year-old wife Tali Chatuel who was in her eighth month of pregnancy with the couple's first son, and his daughters Hila, 11, Hadar, 9, Roni, 7, and Meirav, 2. In one moment, everything had been taken from him, except the impossible and terrible wish that it could have been him instead of them.

How could I have any hope left when I saw this father weeping like a modern-day Job for his murdered family?

For weeks following the attack, the image of this beautiful mother, a social worker who worked to rehabilitate terror victims, and her smiling, innocent daughters hung over me day after day. I could not help but remember that Tali Chatuel was only a few months older than me. I couldn't forget that those little girls were almost the same ages and bore such similar names to my own three daughters. I would go to sleep and see their faces, and wake up and see David Chatuel sobbing with his head in his hands at their funeral.

Over and over, I thought of this broken man's words mixed with the weeping of the thousands of mourners at the funeral for his wife and daughters, "Tali and my girls, I will never forget you until the day I die. I love you so much. I am left alone. My family has been taken from me. If even one of you was still alive..."

For the years following the attack, I did not forget David Chatuel. I heard how in the days following the murders, he was so incapacitated by grief and shock that he was simply unable to speak. I heard how he returned to his work as a respected principal in the southern city of Ashkelon, but that his close friends described him as only a shadow of the man they had once known.

Then, a year ago, I heard some wonderful news. I heard that David Chatuel had decided to get married again, to a young woman named Limor Shem Tov. I am sure that I was far from the only person who cried tears of joy when I saw the photograph of him and his fiance, smiling and so dignified, on the front page of the newspaper.

At their engagement party, David Chatuel explained, "My wife and my daughters will never be erased. They will always be a part of me, and part of my life. The new home that Limor and I will establish will not replace the home that was destroyed. Rather, our home will be an additional floor upon that home's foundation. "

He continued, "After the tragedy, I realized that I had two choices: To fall and to be destroyed, or to continue to live. I chose life."

Last week, I heard that David and Limor Chatuel had chosen life once again. On March 15th they became parents to a newborn baby girl, named Techiya, "rebirth" in Hebrew. And what a rebirth this long-awaited baby marks. The rebirth of a broken human being. The rebirth of a decimated family. The rebirth, even, of the Jewish people in the land of Israel.

The story of David Chatuel is the story of a life risen from the ashes. Of an impossible dream come true. This is also the story of Passover.

By the time Moses and Aaron arrived in Egypt to free the Jewish people from slavery, the Jews had sunk very far from their noble beginnings under the leadership of Abraham, Isaac, and Jacob. After 210 years of humiliation and suffering as slaves, the Israelites had fallen down to the 49th level of impurity. We had become nearly as idolatrous and morally-depraved as the Egyptians themselves.

One of the reasons why the holiday is called "Pesach" -- to leap over -- is because of the tremendous leap of faith it took for the Jews to stop despairing and to start hoping. It took a leap of faith for them to flee their Egyptian masters unarmed, into the desert, toward a distant Promised Land, even though the Red Sea lay in front of them ready to swallow them up, and the Egyptian army was quickly approaching from behind.

It took a leap of faith for the Jews to believe that even though by all rational standards the future was lost, it most definitely was not.

On Passover night 3,000 years ago, a downtrodden nation was reborn when we risked choosing life over hopelessness and fear. Jewish mysticism teaches us that on Seder night, each of has the potential to be spiritually reborn and radically transformed in preparation for the coming year. This is the night to pray to realize your impossible dreams for the coming year -- for the spouse, for the baby, for the job, for the life that has eluded you up until now. On Seder night, God gives each of us the ability to turn our hopes and our most unlikely dreams into reality.

Seder night is the night of David, Limor, and little Techiya Chatuel, may they be blessed with all of the Jewish people with only happiness and health. This is the night of hope burnt to the ground and then miraculously risen from the ashes. Of impossible dreams coming true.

Every Jew Should Live in Israel for at Least a Year

Be A Light
Morality and Abortion: Three Views
There Are No Limits
Adam and Eve Were Vegan
Comments