The Freedom to Shut Up 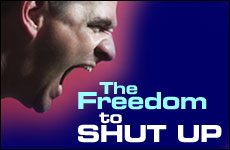 Not all criticism is created equal.

Did you hear about the local court in Israel that sentenced a newspaper editor and a reporter to a year in jail for criticizing the prime minister? Or how about the 100 men that were arrested at a private party in Tel Aviv because they were "dancing and behaving like women"? Or the Israeli court in Haifa that ruled that the testimony of a man is worth twice that of a woman?

You probably haven't heard, because these abuses didn't happen in Israel.

They happened in Israel's neighborhood, in countries like Egypt, Jordan and Saudi Arabia, and as you might imagine, there are plenty more where those came from.

These silent human rights abuses were on my mind when I read about a controversy that has bubbled up in the Jewish world today around this question: Is it good for Israel when Jews go public with harsh criticism of Israel?

When we complain that Israel's global brand image is worse than that of murderous regimes, isn't our public self-flagellation at least partly to blame?

One recent example is a Jewish group that has been presenting on college campuses a stinging, single-minded and in the eyes of many, exaggerated critique of the Israeli army. Presumably, this type of collective soul searching demonstrates the Jewish values of fairness and good faith, and ought to generate some goodwill in return.

Of course, Jewish criticism against Israel or its policies is nothing new -- but not all criticism is created equal. Criticism that rails against the corruption in Israel's government, for instance, is an example of a political system trying to clean up its act to better serve its people.

But Jewish criticism that publicly undermines Israel's morality and ability to defend itself is another matter, and it can backfire.

If we keep "confessing" to an already hostile world, for example, that we are too harsh in defending ourselves, should we be surprised if that same world concludes that we deserve to be punished -- that we had all this terrorism coming?

And if this public self-criticism happens only on our side -- because the other side doesn't allow it -- aren't we creating a false reality that puts inordinate responsibility on Israel for whatever goes wrong? When we complain that Israel's global brand image is worse than that of murderous regimes, isn't our public self-flagellation at least partly to blame?

In short, shouldn't supporters of Israel be more careful with what it allows its enemies to hear?

As I write these words, I feel like an 80-year-old World War II veteran who spends his days looking at his medals. Nothing, absolutely nothing, can make you more exhaustingly boring and unsophisticated today than suggesting for one second that a Jew should watch his mouth.

For the Jews who don't think twice before criticizing Israel in public, there's no such thing as a bad debate. Go ahead and trash the Israeli army over civilian casualties, watch the enemy exploit this weakness to create even more civilian casualties, and then let's all celebrate the beginning of a "terribly important" debate.

Jews who are careful about not helping the enemy don't have this fetish for debate. They see their home being broken into by people about to hurt their kids. Then, as they look at the faces of their frightened children, they have a choice to make: Do they argue with their spouse -- in front of the burglars -- about who was supposed to call that security company to install the new alarm, or do they figure out a way to protect their children and leave the debate on the alarm for later, in private?

These Jews' mouths might be shut, but their eyes are wide open. They see that when Israel tried to give its enemy what it said it wanted (example: Gaza), things got even worse. They believe in peace, but not suicide, and they believe that in times of danger, knowing when to be discrete can be just as courageous as knowing when to speak out.

This is their guiding question: Does an enemy who wants to kill my family deserve to see all my insecurities?

While the world's press records every Israeli mistake, millions of Arabs are being silently persecuted across the Middle East. Where's the outrage?

So clearly, despite the ingrained Jewish habit of self-criticism, there are millions of Jews today who don't think it's a great idea to vilify the Israeli army in front of American and pro-Palestinian college students. Instead of buying you goodwill, it's more likely to buy you bad PR.

Having said all that, in our collective obsession with Israel, Jews of all political stripes have missed a major opportunity to shine a light on the rest of Israel's neighborhood.

While the world's press records every Israeli mistake, millions of Arabs are being silently persecuted across the Middle East -- gays who are arrested for being gay, women who are humiliated for being women, reporters who are attacked for reporting, Christians who are persecuted for practicing their religion, poets who are jailed for writing the wrong poems.

Where is the outrage? Where are the "Breaking the Silence" campus road shows? Where is the liberal support for these Arab victims of human rights abuse who don't have a fraction of the freedoms that Arabs in Israel enjoy?

For all you progressive Jews out there who believe it's in the grand Jewish tradition to always speak out, here's your chance to yell.

My Escape from Child Abuse
Don’t Believe in Other Gods Versus God is One
Seeing Without Eyes
Why Shouldn’t We Eat Whatever We Want?
Comments
MOST POPULAR IN Current Issues
Our privacy policy
Aish.com Is Looking for Great Writers