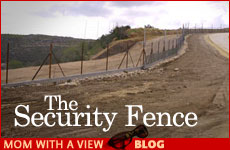 What a difference it has made.

I don't live in Israel. I don't experience the daily challenges of life here. Nor the daily pleasures. What I observe I see in snatches on short trips every year. A quick in and out.

But just as parents may be oblivious to their children's growth as it occurs slowly and incrementally before them while long-lost relatives or friends exclaim about how big they've gotten, so too can I see the dramatic changes.

And one change that is impossible to ignore by those of us who have been coming year after year, intifada or no intifada, is the difference the security fence has made.

While the world screams its moral outrage (clearly without understanding or perspective), the streets of Jerusalem are alive once again. There are people everywhere. Restaurants are packed. Hotels are overbooked. And residents of the same countries whose UN representatives are attacking Israel are visiting en masse.

We trip over tourist groups everywhere we go, to the point where I (almost) wish there were fewer of them. It's very difficult to get to the Kotel on Friday night. My husband and I couldn't find a hotel room. Without a reservation, dinner was once again falafel.

And it's true all over the country. Even the Israeli Arabs feel safer and were picnicking up and down the Galilee to celebrate the end of Ramadan. A few short years ago the artists' colony in Sefad was empty, our footsteps echoing on the lonely cobblestones. I opened my wallet (and emptied my bank account) trying to support my brothers and sisters. Now the streets of Sefad are also full. It's hard to move through the narrow alleyways. And my husband shoos my hand away from his credit card. It's always good to support the Israeli economy (and I still managed to do my bit!) but the situation is less dire; the artists are no longer literally starving.

And I feel less alone. The country is thriving, alive, bustling. Jewish thought advocates a delicate balance between our efforts and the Almighty's intervention in the world. While we recognize and remember that our successes and failures are in His hands, that our safety depends on His beneficence, we must also take precautions.

The security fence seems, thank God, to be an effective effort; a practical action that has made a real and significant difference. Just ask the throngs in the streets. Don't just ask the Jews. Ask the Israeli Arabs, the nuns, the German tourists, the Coptic priests, the American evangelicals, the Japanese. Just don't ask the UN.

Mom to the Rescue!

The Bonds of Love

The Gift of Torah
Morality and Abortion: Three Views
There Are No Limits
Adam and Eve Were Vegan
Comments