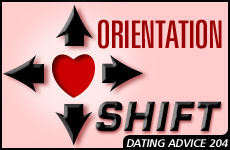 Recent dating experience has matured him. But has it made him ready for marriage?

"Today, people either date with the goal of getting married, or they date for socializing and companionship. They don't change their orientation in the midst of a courtship, no matter how much they like their dating partner."

Is this really true? If so, I'm heartbroken. I began dating a wonderful man over a year ago. Due to some internal and external circumstances in his life, he was painfully shy and inexperienced at 31 years of age. He's now completely come out of his shell and is experiencing life and love with a new set of eyes.

He and I are well-suited for each other in terms of personality, level of observance, financial stability, health, home, and life outlook. I feel that through patience and maintaining boundaries, he will eventually be ready for marriage -- even though we are only dating for companionship now.

What's your take on my situation? Should I move on?

For the most part, our statement is true, with two exceptions that we didn't elaborate upon in our previous column. We have found that some very young (late teens and early 20s) couples who start out as either friends or as casual daters can "grow up" together during the time they are dating or developing a close platonic relationship. They may reach a point where each decides they are ready for marriage, and realizes that the other person is the one they would like to spend their life with. For some reason, this scenario almost never happens when the parties begin dating in their later 20s, when they are more mature.

We have seen a similar phenomenon occur with some individuals who have a psychological barrier to marriage or commitment that keeps them from moving forward in a relationship that has good potential. If the "blocked" person decides to address this barrier while he is dating someone, and is able to overcome it, he can indeed become oriented toward marriage. Much of the counselling work we do involves helping people who recognize they have a barrier and want to overcome it.

It is possible that the man you are dating falls into this second category. Now that he has overcome his shyness and reticence, at sometime in the future he may be ready to consider himself ready for marriage. However, that future may be further off than you are willing to wait, and he may still need to do a lot of work in order to get there. And when he does, he may not believe that you are the right person for him. Sometimes, the dating partner who helps someone with personal growth gets left behind, because he sees her as a healer rather than a life partner.

The problem we see in your situation goes beyond the uncertainty of the future. The fact is, at the present time, the two of you are not dating for the same purpose. Even though you say that you are dating for companionship, the fact is that you are already thinking of marriage and believe that this may be the right man for you. If you continue to see each other while following his agenda for companionship, you'll eventually become discouraged and angry with him for not changing to meet your desire for a permanent relationship.

From our perspective, the wisest action you can take is to have a frank discussion with this man, before deciding whether to continue or to end things. Pick an opportune time and a convenient location to talk, and think out what you would like to say.

Some of the points you can consider making are: that you have come to realize that you would like to get married in the near future, and that you would like to change the focus of your courtship from dating for companionship to developing a relationship that can lead to marriage. You can tell him the reasons you believe you are well-suited to each other and what qualities he has that you treasure. You can even give him some time to think about what you have said and to sort out his feelings.

Ultimately, however, you'll need an answer about his willingness to move your courtship toward marriage and, if he is willing, the time-frame he would like to follow. If the time frame is too long or vague, or if he is clearly not interested in marriage, or if he avoids the discussion entirely, we believe that your time and energy can be put to better use with a man who shares your goal of marriage and is dating in order to find his future wife.

Best of luck in navigating the dating maze,

Dating maze #281 - Negative Father Image
Where Are We? The Body, Brain, Soul Problem
Dr. Sheila Nazarian’s Escape from Iran
The Miami Boys Choir is Taking over TikTok
Comments
MOST POPULAR IN Dating
Our privacy policy
Aish.com Is Looking for Great Writers