World of Love #4 - Glow of Accomplishment 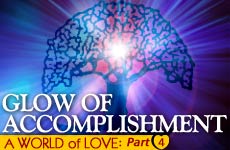 One of the highest human pleasures is that of accomplishment -- completing a job well done.

In order to make man a vehicle to accept His good, God created him with the capacity to enjoy. There are many things that give man pleasure. There are bodily pleasures, such as eating and drinking. There are mental pleasures, such as looking at beautiful art, reading a good book, or listening to fine music. But above all there is the pleasure of accomplishment.

There are few human pleasures greater than those of accomplishment -- of completing a job well done. Whether it is in doing good to others, solving a difficult problem, or simply doing the right thing, man experiences a certain glow of pleasure that is beyond comparison. The only thing that might come close is the spiritual pleasure of the mystic vision. Indeed, we find that many people are willing to forego the greatest physical pleasures in order to pursue a meaningful goal.

People are willing to forego great physical pleasures in order to pursue a meaningful goal.

For most of us, there is a glow of accomplishment that accompanies a meaningful act itself. If we are praised for it, the pleasure is all the greater. If an important person were to tell us that we had done something good, we would experience an even greater pleasure in accomplishment. To win, for example, a Nobel prize and be recognized by the world, is indeed one of the great pleasures of life, and there are people who would work a lifetime toward this end.

Accomplishment and recognition are among the natural pleasures of man. They are not physical pleasures, but delights of the spirit. The wise Solomon spoke of them when he said, "Desire fulfilled is a tree of life" (Proverbs 13:12). He reiterates this several verses later, saying, "Desire accomplished is sweet to the soul" (Proverbs 13:19).

THE JOY OF COMMANDMENTS

In a sense, man’s ultimate reward for doing good is this sense of accomplishment. God Himself tells us what is good, and the reward is in ultimately knowing that one has obeyed God’s direct command. What greater accomplishment can there be than to act as a partner in the very purpose of creation?

It is for this reason that God revealed His will to man. He revealed the Torah to us, telling us what is good. When man then lives by the Torah and does what God Himself has defined as good, he can feel that he has accomplished one of the most meaningful things possible. God teaches us the way in order that we may achieve this everlasting bliss. This is what the psalmist means when he says, You make me know the path of life; in Your presence is a fullness of joy, in Your right hand, everlasting bliss" (Psalms 16:11).

What greater accomplishment than to act as a partner in creation?

Our sages also explain this concept in a somewhat different light, teaching us that one who gives a gift to another must tell him about it. They derive this from the fact that God told us how great were the commandments that He was giving us. Rashi explains the reason for this, saying that when one is informed about a gift, then he both realizes its importance and is not ashamed to accept it (Talmud - Shabbat 10b).

Both of these concepts also apply here. The fact that God Himself tells us that certain things are good makes us realize their importance. Furthermore, as we shall see, it also prevents us from being ashamed of the good that God will give us.

The vehicle through which God defined what is good and beneficial is the Torah. When we obey the commandments of the Torah, we know that we are doing something that God commanded. In this way, we are then able to accept God’s own goodness and fulfill His purpose in creation. The Torah is therefore the prime vehicle of God’s purpose, and our sages thus teach us that the world was created for the sake of the Torah. (Midrash - Genesis Raba 1:1)

The pleasure in accomplishment is not something that God gives us, but essentially something that we create ourselves. We ourselves therefore generate the good that God gives us. Our sages therefore teach us that virtue is its own reward. The prophet expresses this idea when he says, "Say to the righteous that it shall be good, for he shall eat the fruit of his deeds" (Isaiah 3:10). In another place our sages put it this way: "Today to act, tomorrow to receive reward" (Talmud - Avoda Zara 3a).

Torah is the prime vehicle of God’s purpose.

This concept is expressed most clearly by the words of Rabbi Chiya in the Talmud (Brachot 8a). He says, "Enjoying the fruits of your labor is better than the fear of heaven. It is thus written, ‘You shall eat the fruit of your effort -- you shall be happy, and it shall be well with you’ (Psalms 128:2). ‘You shall be happy’ -- in this world, ‘and it shall be well with you’ -- in the World to Come."

What Rabbi Chiya is saying is that the main good of the Future World is the enjoyment of the fruits of one’s labor. This is what he means when he says that "it shall be well with you in the World to Come." This, he says, is greater than mere "fear of heaven." As we discussed earlier, "fear of heaven" refers to our knowledge and perception of God. This perception may be a great thing, but it is all the greater when it comes as the fruit of our own efforts.

The opposite of pleasure is pain. Here again, we have both physical pain and mental anguish. Among the worst possible kinds of psychological pain are the feelings of guilt and shame. In one place, our sages say that the pain of shame is as great as that of death (Talmud - Baba Metzia 59a).

A number of our great teachers write that the fire of Gehenom, the ultimate punishment of evil, is actually the burning shame that one experiences when he stands naked before God with all his sins revealed. (Nishmat Chaim 1:13)

We all know the shame and humiliation of being caught doing wrong.

Imagine standing before God, with your memory wide open and with no way to escape. We all know the terrible shame and humiliation of being caught doing wrong. Imagine what it is like when the One who catches you is God Himself. This is shame without comparison.

It is of this shame that Daniel is speaking when he says, "Many who sleep in the dust shall awake, some to everlasting life, and some to everlasting shame" (Daniel 12:2). The prophet also speaks of this, saying, "They shall go forth and look upon the carcasses of the men who have rebelled against me. For their worms shall not die, neither shall their fire be quenched -- they shall be ashamed before all flesh" (Isaiah 66:24).

But there is another kind of shame that is even more basic. This is the shame of having to accept a free gift. This is a very primeval shame, deeply seated in man’s psyche. Our sages thus teach us, "One who eats another’s bread is ashamed to look in his face." From the context of this saying, we see that it not only applies to human psychology, but even to the most primitive things in nature.

Our sages repeat this lesson any number of times. They teach us that "when a man must depend on gifts, his face changes." In another place, they say, "When one depends on the gifts of others, the world appears dark to him." Elsewhere they proclaim, "one who eats at another’s table is never satisfied." (see Talmud - Yerushalmi Orlah 1:3, Brachot 6b, Beitza 32b)

If given as a free gift, it would be accompanied by the shame of accepting a free gift.

God wanted the good that He would give to be perfect good, not tinged by any shame. If it were given as a free gift, however, it would always be accompanied by the shame that results from accepting a free gift. The only way to avoid this would be for the good to be earned, so that it would no longer be a gift. It is for this reason that the good that God gives us is only bestowed as a reward for our own actions.

When the Zohar speaks of the ultimate world of good, it says, "Happy is he who comes here without shame." This is actually echoing the words of the prophet, who said, "And you shall eat and be satisfied...and my people shall never be ashamed" (Jeremiah 2:26).

In Part 5, we’ll examine the lifelong pursuit of attaining closeness to God.

World of Love #1 - Purpose of Creation

World of Love #2 - Perceiving the Infinite

World of Love #5 - Closeness to God

World of Love #7 - The Possibility of Evil
Blessing on Chewing Gum
Was Rahab a Prostitute?
Extras In Our Own Epic
Comments
MOST POPULAR IN Spirituality
Our privacy policy