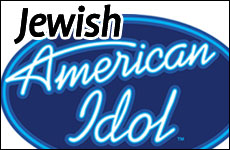 An exclusive, advanced look at the new TV reality show.

One of the advantages of living in Los Angeles, the very nerve center of show business, is that with the right connections, one is privy to all sorts of inside information. Through an inside source who prefers to remain anonymous, I recently became aware of an exciting new reality TV show, scheduled to premiere this Fall on the new Jewish TV network, OyVision, that is certain to become a ratings hit, especially among Jewish viewers. It is called "Jewish American Idol."

"Jewish American Idol" is the first Jewish-themed TV reality show in America. It will feature Jewish men and women of all ages competing in a constantly changing series of Jewish-themed challenges. Viewers will be able to call in and vote for their favorites. The contestants will also be evaluated by three celebrity Jewish judges. Offers have been made to Billy Crystal, Jerry Seinfeld and Roseanne Barr to serve as judges for the pilot episode. Each season, the top 12 contestants will participate in a "Jewish American Idol" tour of the U.S., Israel, and selected countries world-wide. And contestant auditions will be held in major cities throughout America.

Contestants will be able to put together their own meal, selecting from pastrami and corned beef sandwiches on onion roll, potato pancakes, knishes, stuffed derma, chopped liver, beef brisket, flank steak, challah, bagels, eggs and lox, gefilte fish, tzimmes, matzoh balls, and, of course, the perennial Jewish favorite -- Chinese food. After gorging for five minutes, the show's on-duty Jewish doctor will take contestants' blood samples and extract the cholesterol levels. Those with the highest cholesterol readings go on to the next round.

After gorging for five minutes, the show's on-duty Jewish doctor will take contestants' blood cholesterol levels. The highest move to the next round.

Best Case of Guilt Transferred from Parent to Child

Parents will select from such traditional Jewish guilt topics as: Your Father Worked Himself to Death to Send You to College and This is How You Repay Him, My Dying Wish is That You Give Me a Grandchild, Your Ancestors Didn't Escape the Nazis So You Could Not Go to Temple, I Don't Want You to Feel Compelled to Come to Passover Even Though it Could Be My Last One, and I'd Really Appreciate it if You'd Shovel the Driveway Now Unless You Really Want Your Poor Father to Have a Heart Attack.

Parent contestants will do their best to rationalize to their friends, neighbors and relatives one of the following questionable career choices of their college graduate children: Tattoo artist, gang member, bartender, lion tamer, soldier of fortune, yoga instructor, coal miner, surfer, sushi chef, clown, rodeo cowboy, welder, trucker, Scientology processor, assistant manager at Jack In The Box, and hit man. Parents will be hooked up to lie detectors, which will determine the level to which they are actually okay with their kids' career choices.

Contestants will attempt to convince the judges, as well as the home and studio audiences, that they actually believe they are receiving a vigorous, beneficial workout by regularly engaging in one of the following "workout" activities: Sitting in a sauna, checking out sales during a walk through the mall, taking the dog down the street to relieve itself, vacuuming, dancing at their cousin Reuven's bar mitzvah reception, getting the cat out from under the couch, playing Air Hockey at Chuck E. Cheese, gardening, chasing dogs off the lawn, getting a massage, stretching, cracking their knuckles.

Contestants will race over a 10-mile outdoor course that features obstacles they must either avoid, jump over or get beyond. These obstacles include the giant pit of pork products, attractive non-Jews attempting to lure contestants to date them, vendors selling products at retail, CDs of church hymns, country clubs not accepting Jews, various home improvement projects, and a giant piece of Wonder Bread smothered in Miracle Whip.

Contestants will be judged on how badly they can make someone feel based on their comments comparing the person to some friend, neighbor or relative who managed to achieve something far greater than the person in question, often with far fewer resources and privileges to accomplish it. Example: "By the time he was twenty-three, your Uncle Arthur, who was an orphan I might remind you, had already been awarded the Purple Heart, gotten a PhD in Economics, married, had three children, and had become Chairman of the Board of a company just three months after he'd started there as a shipping clerk."

In addition to being one of the Chosen People, Mark Miller has written on numerous sit-com staffs, performed stand-up comedy in nightclubs and on TV, and been a humor columnist for the Los Angeles Times Syndicate. He can be reached at markmiller2000@ca.rr.com

A Chanukah Call to Action
Scientific Curiosity and the Divine Encounter
Mind Over Milkshakes
Love the Convert
Comments
MOST POPULAR IN Jewlarious
Our privacy policy
Aish.com Is Looking for Great Writers