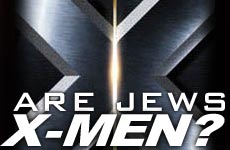 The movie "X-Men" describes a group of mutants who are rejected by the rest of humanity. For me, it hit very close to home.

One of the ways I know if I have seen a good movie, is if I can see aspects of my own life in its story-line and characters. When I saw "X-Men," I felt exactly that. Really -- it was a good movie. And no, I am not a comic book geek, or a video game freak, I just enjoy a good mutant duel as much as the next guy.

The plot goes something like this: human biology has reached a stage where random mutations are occurring and creating "mutants" with certain powers. Some gather at a special school for gifted mutants where they learn to harness their powers and are taught by the X-men. The X-men are not only teachers, but also moonlight as super heroes who protect the planet from the evil renegade mutants.

Meanwhile, American society has become so scared of the mutants simply because they are different. As a result, a charismatic politician, Senator Kelly, is gaining notoriety solely on a platform which is vehemently anti-mutant. Sure it sounds strange -- it's science fiction. Star Trek screenplays don't exactly read like Chaucer either.

The opening scene, which sets the stage for the movie, takes place in a concentration camp during the Holocaust.

The similarities between the mutants and the Jewish people are obvious. The opening scene, which sets the stage for the movie, takes place in a concentration camp during the Holocaust. Both mutant and Jew are seen as different. Although externally both may not really look that different from "normal people," beneath the surface, everyone knows that they are different. This was one of Germany's greatest fears concerning the Jews -- that they could no longer be distinguished from "regular" Germans. The Jews spoke German, acted German, and even looked German, and Hitler was furious that the Jews were quietly infiltrating the highest ranks of German society.

This fear is perhaps exemplified in the character Mystique, skillfully played by Rebecca Romajin-Stamos, in tandem with some kind of female Jackie Chan stunt double. Mystique had the power to transform identically into any human being that she sees. Using this power, Mystique has assimilated into society and even has infiltrated the upper echelon of American politics.

This was one of the fears that the Germans had about the Jews before the Holocaust. However, I should add that if all Jews looked like Rebecca Romajin-Stamos and pranced around the streets painted in blue, I think that we would have been a much more popular people.

Perhaps I may be reading into the X-Men a little too much, but I also found a personal metaphor contained in the movie. One of the story-lines focuses on a young girl named Rogue, who always knew that she was different. She wasn't completely aware of her identity as a mutant, but she knew that there were certain things that other kids did that she could never do. In an attempt to discover what it was that made her feel different, she planned a road trip after she finished high school. Her first stop was Northern Alberta, and it seemed like something was drawing her there.

As an aside, I've been to Northern Alberta, and there is nothing there besides for a friendly family of moose, and a small Eskimo man, so I have no idea what she was feeling. Nonetheless, when she arrived, she met up with Wolverine, and through a set of fortuitous circumstances she ended up at the school for mutant children run by Patrick "I-can't-shake-the-Sci-fi-type-cast" Stewart. There, she realized that she had felt different for all of these years because she was indeed different. She learned about what it meant to be a mutant, and how exactly to harness and control her powers.

Over the years, there were people at the school who had become experts in their powers, the X-men, and they were the ones who taught the children. Rogue, like the others, finally understood herself, and finally felt at home.

I, along with many other Jews have gone through similar experiences as Rogue, the mutant.

I, along with many other Jews, have gone through similar experiences. We have always felt something pulling at us, but could never quite explain it. For some, this urge has taken them to India, Southeast Asia, or perhaps South America. For others, it has taken them to Israel where they've been able to explore what it really means to be Jewish and to finally understand what it was that made them feel so different all of these years.

I had that feeling when I started learning in Jerusalem about four years ago. My teachers certainly didn't look like Hale Berry (Storm) or Famke Jansen (Dr. Gray), but they were just as much experts in Judaism as the X-men were in Mutantism.

At the end of the film, as is presumably evidenced by her funky new hairdo, Rogue goes through a transition. She finds a place in the mutant community, and seems to be finally at peace with herself.

Although unfortunately I didn't get a new hairdo (I was hoping for the religious equivalent of a mo-hawk), I too finally felt a sense of inner peace after my time in Israel. Nagging questions were finally answered, and feelings of uncertainty were gone. I knew why I had felt different all of these years, and I was confident and proud of those differences.

There was a time that I thought that because of my new religious observances, people would look at me like I was a "mutant." But I came to realize that Judaism was something to be proud of, not ashamed of. If that were the way that I viewed myself, then that is the way others would see me as well.

After all, one man's mutant, is another man's X-Man.

Moral Relativism and A Mighty Heart

Top Gun: Maverick – Three Jewish Takeaways
Should I Break Up, Get Engaged or Keep Dating?
Time Is Your Precious Commodity
A Constant World in Flux
Comments
MOST POPULAR IN Current Issues
Our privacy policy