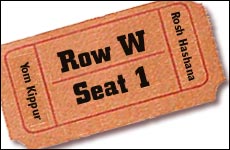 On Rosh Hashana, I feel connected to the grandparents I've never known.

I will never forget that day my husband came home with my very first ticket for a seat at shul for Rosh Hashana and Yom Kippur. Apparently, I suffered from a serious case of delusions of grandeur. I had visions of me sitting at the very front of the shul neatly sandwiched between the president of the sisterhood and the Rabbi's wife. I would spend all of services sitting in the first row, basking in the glow of the Cantor's melodious voice wafting gently over the partition separating the men and the women. I really had my heart set on sitting way up front.

My husband proudly handed me my seat ticket. You can imagine how I felt as I read the seat number aloud for the very first time: Row W, Seat 1. I was positively crushed.

Why would anyone want to sit in the barren wasteland at the back door? Would I need a special visa just to get to my seat? My poor newlywed husband tried in vain to get my seat changed, but to no avail. We were married ten days before Rosh Hashana and we had both completely neglected purchasing seats for the High Holidays. I imagined myself trapped between two new moms, their grubby toddlers grabbing at my brand new hat, leaving grimy finger prints on my beautiful new suit.

With a heavy heart and two Advil, I arrived at shul on Rosh Hashana morning. There were only four seats in Row W. That was great news. I wouldn't need to trample anyone squeezing down the row to get to my seat.

Being a newlywed I arrived late and spent my first 20 minutes silently speed reading through the morning service to catch up to the rest of the congregation. Completely lost in my prayers, I neglected to notice any of my seat mates. Eventually I managed to find myself on the same line as the rest of the congregation and I slowly allowed my eyes to drift away from the print.

It didn't take long to notice the people seated directly in front of me. Three generations of women; a mother, her young daughter and her elderly mother. I was absolutely fascinated by this group. The grandmother in her freshly pressed linen suit prayed silently and would break her concentration only to glance lovingly down at her young granddaughter. The granddaughter pointed to every word as the chazzan sang and leaned her head gently on her grandmother's shoulder. The mother whispered to the grandmother and then softly draped a sweater over her shoulders.

Mesmerized, I could visibly see the threads of love that bound these three women together.

I had never witnessed three generations of women like this. Mesmerized, I could visibly see the threads of love that bound these three women together.

My grandparents all passed away long before I was born. My father was raised on the Lower East Side of Manhattan. His father was a rabbi of a small shul on Henry Street. It was the first Lubavicher Shul in America. My maternal grandfather was the rabbi of a congregation in Stockholm, Sweden. My Zeida was completely devoted to his congregants. He was the chazzan, the shochet and the local mohel. Late at night, after he was done counseling members of his shul, he spent hours writing Jewish books.

All this information seemed very grand and impressive to a young girl. Yet, at the same time, it meant absolutely nothing. I never fully grasped the role of a grandparent in a young child's life and I never thought I was missing out on anything. I had always assumed a grandparent was simply a third parent, only a bit older and therefore prone to complaining more.

Yet, this trio of women seated directly in front of me was simply unbelievable. I was actually witnessing firsthand three generations who truly followed the mitzvah of Honoring thy Father and Mother. The longer I watched, the more I was filled with a longing for the grandparents that I had never known.

Unconditional love is truly a miracle to behold and I realized that this is what it must be like to have a grandparent.

The grandmother slowly stood up to go to the restroom and the granddaughter immediately followed. I never heard a single word exchanged. The young girl automatically stood up and followed, making certain that her grandmother didn't trip over a stray stroller or struggle with a heavy door. I was completely overwhelmed.

I found myself wondering what my grandparents might have been like If they were alive today. Would they be full of pride as they listened to their great grandchildren discuss the weekly Torah portion? Would they be pleased with woman I have become? Would they approve of the choices I have made? Would they share my accomplishments with their friends? Would I sit next to my grandmother in shul as she stroked my daughter's cheek?

Tears silently crept down my cheeks for the grandparents I had never known. My thoughts drifted to the old family portraits in my parents' dining room. My grandfather's portrait was very formal, with his shoulders squared and his eyes looking straight into the camera lens. As a very young child I would hurry by that photograph, his eyes staring intently at me. I always felt he could see into my soul.

As I grew older and more brazen, I would stop and gaze at this one lone photograph and I could almost hear him speak in a deep booming voice. Seema, how are your teachers this year? Did your grade in Torah studies improve? How was your class Purim play? Have you dried the dinner dishes yet? I would stand silently and stare at the solitary portrait of a young rabbi in Stockholm, Sweden. Perhaps if I looked hard enough he would wink at me and tell me not to worry so much.

I found myself scanning the sea of faces looking for my grandfather.

The hum of the congregation gently brought me back to the morning service. I sat quietly as I was slowly lulled away from my thoughts by a heavily accented voice directly behind me. "Look how smart he is. Can you believe it?" I turned around and noticed an older woman with broad grin on her face bouncing a young baby in her lap. He was carefully pulling only the cookies from the bag of snacks. This grandmother positively beamed with pride. "Bubby loves you so much, Tattele," she whispered. I was immediately introduced to her daughter-in-law and grandchildren. As I continued praying, I would smile softly as I listened to the bubby behind me whisper gently to her grandson. I relished every moment of services that day. I was completely enveloped by love and admiration. My eyes were drawn to the sea of men wrapped in their prayer shawls. I found myself scanning the sea of faces looking for my grandfather.

Twelve years later I am still sitting in Row W, Seat 1. Time marches on. My daughter sits next to me during services. I stroke her cheek as she sits quietly listening to the chazzan sing. I gaze across the partition and notice my son sitting proudly next to his father. He is following along in the Chumash as the Torah portion is being read. Instinctively I scan the men's side looking for my grandfather that I know is not there.

The bubby behind me tells me that my daughter and I look "Absolutely stunning." She notices that my daughter is taller and her hair has gotten longer. The grandmother in front of me turns around shyly and silently nods a "Good Yom Tov."

I lean back in my seat and gently close my eyes. I can see my grandfather gazing down at me, his white shirt freshly starched for the holiday. I blush slightly as I hear him whisper, Seema, you are doing just fine.

I've had numerous opportunities to have my seat moved closer to the front of the shul but every year I decline. Somehow I feel more connected to my grandparents after Rosh Hashana. I wouldn't trade that feeling for the best seat in the house.

Birthday for the Bereaved

Mother's Love and Chicken Soup
The Blue Beyond
Great Place to Live
Is Eating Supposed To Be Spiritual?
Comments
MOST POPULAR IN Family
Our privacy policy