A Chicago Bears Fan in Paris 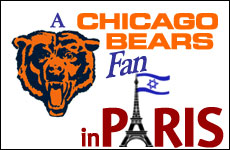 There is no place like home. But where is home?

"The worst part of spending three years in France," Jeff told us during a recent visit, "was being a Bears fan in Paris."

Jeff, a college friend of my husband's, has been a diehard Chicago Bears fan ever since he started watching Monday Night Football from his father's lap at the age of five. He's the kind of fan who has traveled as far as Seattle, New Orleans, and Miami for important games, and can effortlessly quote the statistics of Bears players who haven't stepped onto a playing field for decades.

"At first," Jeff recalled, "Lisa and I were thrilled when my boss said I was being transferred. We both love Paris. We love walking along the Champs Elysees in the moonlight, and sitting in sidewalk cafes, and losing ourselves in the Louvre.

"But a few weeks after we got there, I realized that Paris might be Paradise, but it's no place for a Bears fan. Back in Chicago, being a Bears fan is the most natural thing in the world. When the Bears win a big game, people are dancing in the streets. And when they lose, like when they lost the division playoffs to the Panthers last year," Jeff winced, "I just looked at faces at work the next morning, and knew exactly what every person in my whole office was feeling.

"But in Paris, I was completely on my own. When those three years were finally over, I realized that Dorothy was 100% right. There's definitely no place like home."

Jeff's experiences had a lot in common with my visit to North America this past August. When my family arrived in Kingston, my husband's hometown outside of Toronto, the Lebanon War was raging full speed ahead.

Back in Israel, over a million Israelis were living in bomb shelters or had fled their homes on account of the missile attacks on the North. The husbands of some of my closest friends, and tens of thousands of some of Israel's finest young men, were in Lebanon risking their lives in order to keep Israel safe.

And I was in Kingston. Where people trimmed their hedges, and drank bottles of beer on their front porches, and piled canoes and bikes onto their cars in preparation for weekend trips out of the city.

I felt like a person whose house was burning to the ground while he was locked inside an amusement park.

I tried to be a good sport. I skipped rocks with my daughters into the tranquil waters of Lake Ontario. I life-guarded at the wading pool in my mother-in-law's backyard. I ate potatoes and hotdogs roasted over a fire at the family's cottage.

But I wasn't really there. I felt like a person whose house was burning to the ground while he was locked inside an amusement park.

My body was in Canada, but my heart was in the war zone 5000 miles away.

On the last day of my family's trip, after the war was over, we attended my brother's wedding in Washington, DC.

I cannot describe how happy I was to see my older brother getting married to the soul mate he had been seeking for so many years. It was also exciting to be reunited with relatives that I hadn't seen in over a decade since I moved to Israel.

At the wedding, many of my relatives asked me about life in Israel. I was already very homesick, and tried to put into words the reasons I longed for my adopted homeland.

As we spoke, one uncle recalled a wonderful trip he had taken to Israel 30 years before. One cousin said that he really would like to finally visit Israel one day. And I could see that he meant it.

But for most of my relatives, when I spoke about why I live in Israel, I could see in their faces that they didn't get it. For the most part, they nodded politely, as though they could see my lips moving, but couldn't understand the words.

The next day, they would return home to their lives in Long Island or Atlanta or Westchester. And I would be clapping and singing Israeli folk songs with the other passengers as our plane landed on the other side of the world.

But for me, the moment they stamped my Israeli passport at Ben Gurion Airport, I realized that while the Champs Elysees in the moonlight has its definite charms, if I was a Bears fan like Jeff, I would want to be in Chicago to cry with my friends from the office, and to dance with them in the parking lot of Soldier Field.

And since I'm a fan of Israel, I also want to be right here through the best of times and the worst of times. I want to be here when times are tough to cry on the shoulder of my daughter's third grade teacher, and to worry and pray together with my friend whose husband does not have the luxury of watching the fighting from the safety of his living room sofa.

And I want to be right here, as well, in order to dance with them all beside the Western Wall when the better times come.

As I exited the airport and walked into the Israeli sunlight with my husband and daughters that day, I realized that Jeff was 100% right.

And Dorothy was too.