Passover in the 'Hood 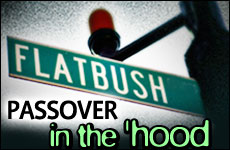 Growing up in Brooklyn, even if I wanted to escape my faith, how could I?

We lived in Brooklyn. The neighborhood, Flatbush, was entirely old Jews who couldn't afford to relocate to Miami and young Jewish couples who couldn't afford to relocate to Long Island. This was fine with Justin, my brother, and me. We had friends to play ball with and old people to stuff tzedaka into our blue and white JNF pushkes. In tonier neighborhoods our building would be located at the end of a cul-de-sac, but Flatbush had only dead-ends.

In my Brooklyn the bases weren't square; they were a constellation of Stars of David.

Growing up Jewish in Brooklyn, like baseball, was comprised of four bases: home; first -- Public School, each morning's destination; second -- Talmud Torah two afternoons a week; third -- playing ball. Even if I wanted to escape my faith, how could I? In my Brooklyn the bases weren't square; they were a constellation of Stars of David.

Several facts about apartments in my building: each was rent-controlled and each was guarded by a small mezuzah of inverse importance to its size as it was the only one for the house. Each dining room had a breakfront drawer stuffed with pastel-satin yarmulkes recalling a simcha; and each living room a carved miniature Bubbe wearing a head-scarf and Zeide carrying a siddur, reminding of us of what we used to look like.

P.S. 152, my elementary school, was perhaps the most Jewish of my stops. 35 kids in class, all but three were Jewish, and teachers in successive years named Schwartz, Klein, and Rotter. And the best Yiddish of all was spoken by my music teacher, Mr. Johnson, a Baptist African-American from Oklahoma.

Hebrew School had fewer Jews but more Jewish content. Conservative shuls in those days in Brooklyn preferred their rabbis decidedly more observant than the congregation. It was one thing for a member to eat treif or keep Shabbos less than rigorously, but it would be a shonda if the rabbi were to commit such a sacrilege and Rabbi Weitzman, my first rabbi, was no exception. All of our teachers were observant and we prayed from the Birnbaum siddur, the precursor to Artscroll, ubiquitous in American Orthodox shuls.

Ball playing on the dead-end street that ran between the red brick apartments was a daily event interrupted only by Acts of God: extremes of snow or rain, or Jewish holidays. Bad weather may occur randomly but perfect ball-playing weather was expected on the High Holidays. Annually, we would stand around in our Yom Tov suits, hands in pockets, and question why God would so cruelly test us, sending such glorious weather on Rosh Hashana and Yom Kippur. But, hey, if Sandy Koufax could pass on pitching in the World Series, I could take a day off as well.

The convergence of my interests came annually in April. As Pop began to focus on the midpoint of the month and making the April 15th filing deadline, my brother and I geared up for the first nice Sunday of April and the midpoint of the Jewish month of Nisan, also known as the start of Little League baseball and the Passover Seder, respectively.

Spring returned bearing these two events like gifts to the Solomon home. As not to interfere with the cycle of Jewish life my kid brother and I belonged to a Jewish Little League; all games played on Sunday and no games played on Passover or Shavuot if these holidays fell on Sunday. This too was fine with me. Chanukah may bear presents and Purim the best treats, but Passover was the pinnacle of the Solomon Jewish year.

Our parents came from proud but under-educated Jewish homes and ensured that Justin and I would have a solid Jewish upbringing. It was therefore left to my brother and me to lead the Seder. We ran a thorough Seder that made it all the way to the meal and then directly to singing all the songs we learned at Hebrew School. What our Seders lacked in length was made up for in enthusiasm and personally experiencing being taken out of Egypt -- and of course, my mother's matzah balls. I never realized how much I treasured Mom's matzah balls until years later, several Seders after I became observant, when I experienced a distressing feeling of betrayal and neglect at the first Seder I attended which did not eat G'brocht (matzah meal mixed with any liquid). Seder soup is not soup without matzah balls.

Jumping ahead a generation, again I lead the Seder, but now I am Pop, the abba to two wonders, Dovid and Sima, and the husband to Wonder Woman. My wife, Jenny (a doctor -- she's my folks' favorite) makes the Seder and follows Mom's special matzah ball recipe scrupulously -- two eggs, salt, one box Streit's Matzah Ball mix, stir). I lead the Seder, much as Justin and I did back in Brooklyn, singing the same melodies Rabbi Weitzman taught us almost 40 years ago and still longing to be in Jerusalem next year.

Of two things I am certain: soon our children will know more than their parents and will lead the telling of the Exodus, and soon all of Israel will sing "This Year in Jerusalem."

Meir (Matt) Solomon is originally from Brooklyn, NY. He started his journey in Torah at Aish HaTorah as a participant in the Jerusalem Fellowships program. Meir now lives with his wife, two children, and dog in Passaic, NJ. A lawyer by training, he has worked as a political speechwriter, editor, and educator, bouncer and baseball coach.

The Last Jews of Yemen

L’Chaim: To the Toastmasters

Latkes Are an Essential Hanukkah Food, Even If They Haven’t Been Around Very Long
It Takes A Lot Of Faith To Be An Atheist
How Instagram Brought Back This Nostalgic Soup
What Makes Eli Run?
Comments
MOST POPULAR IN Israel
Our privacy policy