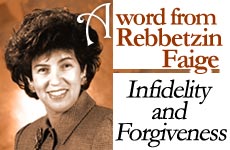 A woman came to me in deep despair, asking a very difficult question: "My husband had an affair with another woman. How can I ever forgive him and trust again?"

While every situation is and must be dealt with in its particular context, there are some guidelines in the Torah which can help lay the groundwork for how to approach such a problem and how to initiate the process of healing.

During this season of our religious calendar -- between Shavuot and the High Holidays -- themes which jump out of the pages of Jewish history relate to the agonizing issues of commitment and betrayal, love and infidelity, greatness and disgrace, and ultimately the concepts of repentance and forgiveness.

The most striking is the incident involving the Golden Calf -- which occurred only forty days after the encounter with God at Mount Sinai. While awaiting the return of Moses from the mountaintop, the Jewish people had miscalculated his estimated time of arrival and concluded that their leader had died. In dread of having lost their intermediary to God, they fashioned the infamous idol to take his place (Exodus 32:1).

The Divine response clearly marks the episode of the Golden Calf as an act of supreme betrayal and infidelity.

The Divine response clearly marks the episode of the Golden Calf as an act of supreme betrayal and infidelity on the part of the very same nation who had, just a short time earlier, pledged their allegiance to God and His Torah. In the ensuing dialogue between God and Moses, there seems to be a question as to the very viability of a continued relationship between God and his elect people -- God wants to sever the relationship.

Yet Moses’ unceasing and fervent petitions prevail and the process of repentance and forgiveness is begun.

Upon examination we find that the text articulates a three-tiered process:

In addition, the nation had to contend with loss of heart, disappointment in themselves, self-directed anger at the inability to have risen to the challenge, inordinate self doubt, and a serious loss of trust in one’s judgment. Before God would forgive us, we had to work through all these issues, so that first and foremost we could forgive and restore trust in ourselves.

In the end, forgive us He did!

Another example, a more personal one, is the serious indiscretion committed by King David, head of the royal line of Israel, and certainly one of the most illustrious figures of all time.

Although our Sages inform is that the popular understanding of King David’s seduction of Bathsheba is in error, the way in which the his actions are recorded in the Book of Samuel (Samuel 2, 11:2) indicates that a serious breach of morality occurred.

In response to what David did, God dispatches His prophet to confront the King. The prophet’s rebuke leaves David devastated and anguished.

King David acknowledged his wrongdoing, agonized over it, and resolved never to repeat such behavior.

Following the pattern of repentance laid by his ancestors at Mount Sinai, King David acknowledges his wrongdoing, confesses, agonizes, and soul-searches, resolving never to allow for the repetition of such behavior.

The Book of Samuel records that King David paid a bitter price for this departure, but most importantly, he was forgiven by God and reinstated as one of the spiritual giants of Jewish history.

THE PROCESS OF FORGIVENESS

From the examples above -- and many others -- we learn that because God forgave when there was genuine repentance, we must also.

However, forgiveness of such a serious violation of trust as marital infidelity does not come easily.

How do we do it? How can we forgive?

Forgiving another has to begin with examining ourselves.

Forgiving another has to begin with examining ourselves. We must look at the issues of our own complicity -- real complicity or perceived complicity, for they are both variables of great moment.

Moreover, we need to confront our own vulnerabilities. Are there deep-seated insecurities and weaknesses which this betrayal has brought to the fore and which urgently demand our attention?

It is critical that we regroup -- to strengthen and fortify ourselves. Another crucial objective is to center one’s life, forging a relationship with God, our Higher Power. We can do this through introspection, learning, meditation, praying, and surrounding ourselves with people of genuine spiritual substance. When we begin to feel the comforting, loving embrace of our Creator, we will simultaneously experience a sense of healing and wholeness. We will know with certitude in the depth of our being that God will never betray us or abandon us.

Furthermore, we need to reach in and reach out, embarking on pursuits that will foster a positive self-image and make us feel, healthy, competent and sufficient. From this position of strength and self-esteem we can proceed to the next phase, which is to address the issue of the offending party.

This stage of the process asks: Has the spouse sincerely engaged in repentance as we understand the three-step process from the Torah model?

The response to the last question should include, among others, the willingness to obtain counseling. The agenda for counseling would be to:

It should go without saying that forgiving, healing and building trust take time. It requires consistent investment and hard work.

In the last analysis, hanging on to anger and resentment, obsessing and refusing to forgive is, as someone observed, letting someone live in our head rent-free. The greatest beneficiary of forgiveness is to the one who finds it within one’s self to do so.

Most significantly by forgiving we reach beyond our finite limitations and in the likeness of our Creator in whose image we are fashioned, we become more exalted human beings, mending the broken, healing the wounded, and restoring the integrity of love.

One Drink Too Many: My Journey of Breaking Free from Alcohol
The Scandalous History of the Aleppo Codex
Who was Two-Gun Cohen?
Why Really Everyone Believes in Free Will
Should Jews Support Ukraine?
The Jews of Cuba
Comments
MOST POPULAR IN Rebbetzin Feige
Our privacy policy