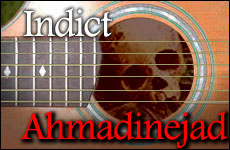 Iran's intentions are nakedly, malignantly clear. What is not clear at all is what the civilized world will do about it

Simon Bikindi was once the most famous musician in Rwanda. Twelve years ago he was also the most lethal.

In 1994, as Hutu militants slaughtered more than 800,000 of Rwanda's minority Tutsis and moderate Hutus, it was Bikindi's inflammatory songs that dominated the country's airwaves. Radio Milles Collines, which egged on the death squads and coordinated their attacks, "played Bikindi's music constantly during the 100 days of killing," the New York Times recalled in 2002. "In Rwanda, almost no one reads newspapers or owns a television, and radio is king. According to eyewitness reports, many of the killers sang Bikindi's songs as they hacked or beat to death hundreds of thousands of Tutsis with government-issued machetes and homemade nail-studded clubs."

According to eyewitness reports, many of the killers sang Bikindi's songs as they hacked or beat to death hundreds of thousands of Tutsis

Today Bikindi is being tried by the international tribunal created to bring Rwanda's accused war criminals to justice. The central charge against him is that he incited genocide with his songs. He is not the only Rwandan to be put on trial for incitement. Among those already convicted are a founding director of Radio Milles Collines and the one time editor of Kangura, a virulently anti-Tutsi newspaper.

Words can be deadly, opening the door to murder on a vast scale. That is why the 1948 Convention on the Prevention and Punishment of the Crime of Genocide unambiguously makes it as much of a crime to incite acts of genocide with words as to physically commit them with weapons. And if that is true of words uttered by a singer or an editor, surely it is even truer of exhortations to mass murder by a head of state .

So if Simon Bikindi has been charged with incitement to commit genocide, why hasn't Mahmoud Ahmadinejad?

In New York last week, a number of prominent lawyers and diplomats -- including John Bolton, the outgoing American ambassador to the United Nations -- called for making the indictment of Ahmadinejad an international priority. The gathering was organized by the Jerusalem Center for Public Affairs, which issued a brief setting out in detail the legal case for prosecuting the Iranian president and the regime he represents.

There is nothing cryptic about Iran's genocidal intentions. Ahmadinejad has called openly for Israel to be "wiped off the map." In 2005 he hosted a conference anticipating "The World Without Zionism"; last week he convened another to deny that the Nazi Holocaust ever took place. He vows that Israel "will be purged from the center of the Islamic world" and that "the elimination of the Zionist regime will be smooth and simple." He demonizes Jews as "bloodthirsty barbarians" and "very filthy people" who have "inflicted the most damage on the human race." In August he warned: "They should know that they are nearing the last days of their lives."

These are not the ravings of some obstreperous politician whom Iran's clerics would be wise to muzzle. Ahmadinejad's words echo genocidal threats made at the highest levels of the Tehran regime.

"There is only one solution to the Middle East problem," declares Iran's supreme leader, Ayatollah Ali Khamenei, "namely, the annihilation and destruction of the Jewish state." Former president Hashemi Rafsanjani, routinely described in the West as a "moderate," explains the asymmetrical advantage of a nuclear attack on Israel: "The use of a nuclear bomb against Israel will leave nothing on the ground, whereas [any Israeli retaliation] would only damage the world of Islam." Iran is aggressively pursuing nuclear weapons; it already has the long-range missiles needed to launch them. When those missiles are paraded behind signs reading "Israel must be uprooted and erased from history," it requires willful blindness not to perceive what Ahmadinejad and the mullahs have in mind.

An indictment of Ahmadinejad under the Genocide Convention would not, by itself, eliminate the threat of a second Holocaust. It would, however, make a good first step.

For many months preceding the Rwandan genocide, there was similar incitement to mass-murder. Yet international authorities did nothing to silence the inciters -- with catastrophic results.

The situation in Iran today is frighteningly similar. But as the JCPA brief, which was written by human-rights scholar Justus Reid Weiner argues, there is one critical difference: "While the Hutus in Rwanda were equipped with . . . machetes, Iran, should the international community do nothing to prevent it, will soon acquire nuclear weapons." At that point Tehran would be poised to commit the first "instant genocide" in history.

At the New York symposium, Ambassador Bolton remarked that historians looking back at horrific acts of evil often wonder how responsible officials at the time didn't see them coming. "How was it that they missed . . . clear signals from the people who were about to commit acts of great barbarity and atrocity -- who never made any effort to conceal what their intentions were?"

Iran's intentions are nakedly, malignantly clear. What is not clear at all is what the civilized world will do about it. An indictment of Ahmadinejad under the Genocide Convention would not, by itself, eliminate the threat of a second Holocaust. It would, however, make a good first step.

2068
The 21st President of the United States: Failure or Inspiration?
Hiding Their Jewishness
The Jewish Pope: Following the Questions Home
Comments