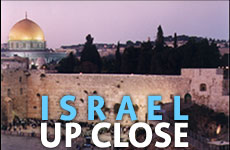 On the Wailing Wall, Qassam rockets and hummus (or why everything you think you know about Israel -- if you haven't visited Israel -- is likely wrong).

Just under 10 days isn't a lot of time to travel a lot a whole country. But our little group -- just under 30 Québec university students -- travelled from one end of Israel to the other in that time span, managing to visit many points in between. In that time we saw, amongst others: Old Jerusalem, a Christmas church service at Abu Gosh, the Israeli Supreme Court, the Knesset, Yad Vashem, the security fence/wall/barrier, a kibbutz, Mettula, Haifa, Caesarea, Ben Gurion University, Sederot, Ma'ale Adumim (a "settlement" in the West Bank that is more like a small town) and Be'er Sheva. We talked with scholars, journalists, students, politicians and activists from all corners of the Israeli political spectrum.

It would take too much time and I would bore you to death if I went through every detail of what we learned. So I will just offer my overall impressions of this country, which I was seeing in person for the first time.

Israel is a fascinating country. Its people are friendly, knowledgeable, westernized -- and most of all, tolerant. They have an amazing sense of purpose and resilience in the face of daily threats to its very existence. That's something no other country really has to grapple with, and I think it takes visiting there to fully understand the feeling of what that's like. The security barrier has put a virtual halt to suicide bombings, and security is tight: most restaurants, clubs and other public buildings have a security guard that pats down people before they enter, and some even have metal detectors. Still, how much can you really prevent? On New Year's Eve, we were dancing at a club in Tel Aviv. Security was tight. But if someone had wanted to drive by and chuck a grenade through the window, could anyone really have done anything? Doubtful.

Anyway, my two main thoughts: First, Israel must be supported.

I have no problem saying this as someone who is of partly Palestinian ancestry. Israel is a democratic, pluralistic western outpost in the middle of a cesspool of tyranny and despair. The image you get on TV of Israel as a country full of religious people is wrong. Israel is actually quite a secular country, and its inhabitants come from all different faiths. There are a million or so Arab Israelis inhabiting its lands, many of whom are Muslim. There are Christians, Druze, Zoroastrians -- and lets not forget the bedouins. When we visited a hospital, we met a bedouin woman who, while still living the traditional nomadic life, was being trained as a doctor by Jewish doctors.

As someone who thought he knew a fair bit about Israel before going there, I came away with a sense that I really didn't know the half of it. I think it probably takes a visit there to truly appreciate the nuances and intricacies of this country.

Everyone wants peace, but it takes two to tango. The peace partner on the other side is simply not there.

After all the terror and the two intifadas, it was amazing to see and hear so many Israelis still so committed to peace and willing to do just about anything to achieve it. If the Palestinians and their leadership would truly recognize Israel's right to exist tomorrow, I have little doubt a state would follow very soon. This is not just rhetoric. It is the sense I got from almost every Israeli we talked to, from the leftwingers on the kibbutz to the Likudnik settlers. Everyone wants peace, but it takes two to tango. The peace partner on the other side is simply not there.

Second thought, and this hit me hard when we visited the Holocaust museum at Yad Vashem: the world must never turn a blind eye to evil. Seeing prima facie exhibits and evidence of what happened in Nazi Germany rekindled thoughts of the modern genocides in Yugoslavia, Rwanda, the Sudan and many others. It even made me think of Jack Layton and his insane idea to break bread with the Taliban.

How do we let this happen? How is it that the lessons of history are so often ignored? Why is there such a willingness to appease and placate evil, especially in the West? I don't know - I don't understand it and I never will. But if more people visited Israel, I think more people would understand the need for vigilence and to stand up to wrongness and evil. War is ugly, but there are situations in the world in which no other option exists. Sometimes war is necessary to bring peace. Always has been, always will be.

How Honest Are Israelis?

My Toughest Mission
Near Death Experience Panel
The Western Wall: The Heart of the World
Ask the Right Question: Tisha B’Av
Comments