How the West Could Lose 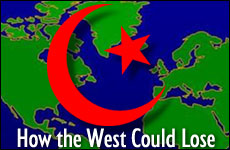 Pacifism, self-hatred and complacency are lengthening the war against radical Islam and causing undue casualties.

On the face of it, its military preponderance makes victory seem inevitable. Even if Tehran acquires a nuclear weapon, Islamists have nothing like the military machine the Axis deployed in World War II, nor the Soviet Union during the cold war. What do the Islamists have to compare with the Wehrmacht or the Red Army? The SS or Spetznaz? The Gestapo or the KGB? Or, for that matter, to Auschwitz or the gulag?

Yet, more than a few analysts, including myself, worry that it's not so simple. Islamists (defined as persons who demand to live by the sacred law of Islam, the Sharia) might in fact do better than the earlier totalitarians. They could even win. That's because, however strong the Western hardware, its software contains some potentially fatal bugs. Three of them – pacifism, self-hatred, complacency – deserve attention.

Pacifism: Among the educated, the conviction has widely taken hold that "there is no military solution" to current problems, a mantra applied in every Middle East problem – Lebanon, Iraq, Iran, Afghanistan, the Kurds, terrorism, and the Arab-Israeli conflict. But this pragmatic pacifism overlooks the fact that modern history abounds with military solutions. What were the defeats of the Axis, the United States in Vietnam, or the Soviet Union in Afghanistan, if not military solutions?

Self-hatred: Significant elements in several Western countries --especially the United States, Great Britain, and Israel -- believe their own governments to be repositories of evil, and see terrorism as just punishment for past sins. This "we have met the enemy and he is us" attitude replaces an effective response with appeasement, including a readiness to give up traditions and achievements. Osama bin Laden celebrates by name such leftists as Robert Fisk and William Blum. Self-hating Westerners have an out-sized importance due to their prominent role as shapers of opinion in universities, the media, religious institutions, and the arts. They serve as the Islamists' auxiliary mujahideen.

Complacency: The absence of an impressive Islamist military machine imbues many Westerners, especially on the left, with a feeling of disdain. Whereas conventional war – with its men in uniform, its ships, tanks, and planes, and its bloody battles for land and resources – is simple to comprehend, the asymmetric war with radical Islam is elusive. Box cutters and suicide belts make it difficult to perceive this enemy as a worthy opponent. With John Kerry, too many dismiss terrorism as a mere "nuisance."

Pacifism, self-hatred and complacency are lengthening the war against radical Islam and causing undue casualties. Only after absorbing catastrophic human and property losses will left-leaning Westerners likely overcome this triple affliction and confront the true scope of the threat. The civilized world will likely then prevail, but belatedly and at a higher cost than need have been.

Should Islamists get smart and avoid mass destruction, but instead stick to the lawful, political, non-violent route, and should their movement remain vital, it is difficult to see what will stop them.

This article originally appeared in the New York Sun.

Changing a Tire for a Stranger

Totally Cool
Don’t Believe in Other Gods Versus God is One
Seeing Without Eyes
Why Shouldn’t We Eat Whatever We Want?
Comments
MOST POPULAR IN Current Issues
Our privacy policy
Aish.com Is Looking for Great Writers