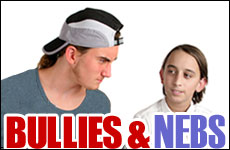 Admittedly, six is quite young for a child to be spending two months at sleepaway camp. Nevertheless, there I was in Bunk 1A, dutifully lying on my bed after lunch during the mandatory daily rest hour. Our counselor -- perhaps his name was Bob, but time has blurred my certainty about this and other tertiary details -- had stepped out of the bunkhouse for a few minutes. That left me and my five bunkmates alone and unsupervised.

David -- I do remember his last name but will omit it here to safeguard his privacy -- boldly sat up on his bed. This was clearly in violation of rest hour protocol and signaled to the rest of us that he was a fearless force with whom to be reckoned.

"Let's take a vote," David proposed, haughtily. "And let's see how many friends we each have."

David glared around the bunk with that mean spirited look he reserved for his more mischievous escapades. No one dared to challenge David's ultimate authority in the social pecking order.

"Let's start with me," David began his impromptu popularity poll. "Whoever is my friend, raise your hand."

Five six-year-old hands shot up into the air like military salutes, firmly corroborating the already well-established fact that David had assumed his position at the top of the totem pole.

David then went around the bunk, calling for a popularity vote for each one of us. Some received three votes. Others got four. Eventually, my turn came.

To my utter shame, no one raised his hand. My popularity was confirmed at zero.

My heart was pounding. At the time, it felt as if this was going to be the most critical event of my entire life. Nothing seemed more important. The suspense was excruciating. Finally, David posed the question that I dreaded the most. "And who likes Meir?"

David glowered around the bunk, nonverbally intimidating the other four eligible voters. To my utter shame, no one raised his hand. My popularity was confirmed at zero.

David laughed victoriously. Then he gloated, "So, this proves that Meir has no friends in the bunk and I have the most." Apparently, David felt that by establishing my place at the bottom, it secured his place at the top of the social food chain.

After rest hour we were getting ready to go swimming. I buttonholed the boy who slept in the bed next to mine.

"Why didn't you vote for me?" I probed, innocently. "I thought we were friends."

"We are," he replied, sheepishly. "But I was too afraid of David to raise my hand."

It is now over 50 years since that popularity poll was taken during rest hour. The precision of my recollection underscores the impact such can have on the life of a young child.

Whether we like it or not, children will always create their own social order. As a parent, what can you do to prevent your child from ending up at either end of that pecking order? How can you help your child not to become one of the bullies on top or "nebs" on the bottom? And if you discover that your child is the victim or perpetrator of bullying, what should you do to help?

While all children are born with innate personality tendencies, there are two steps you can take to diminish the chances that your child will develop into a bully.

1. Minimize open displays of hostility and aggression at home. All children learn most by the examples set by their parents. If you employ intimidation, manipulation and force in your dealings with family members, your children will learn from your example and apply these same tactics in their own dealings with their peers. So if you do not want your child to tyrannize the other children at the playground, make sure you do not browbeat your spouse or children at home.

2. If you do lose control at home, be sure to apologize to your victim publicly. If you overreacted to your child, let him know that you regret your behavior. This will teach your child that you disapprove of harassment in any form and will discourage him from copying your misbehavior.

By nature, some children tend to be more passive and conciliatory. As such, these children are at increased risk of being exploited by their peers. While you cannot guarantee that your child will never be taken advantage of, there are two steps you can take to reduce your child's risk.

2. Encourage self-assertion. You cannot expect your child to have the confidence to assert himself with his peers if he never has any opportunities at home to express his opinion. By learning to speak up and be heard at home, your child will learn how to stick up for himself, when necessary, at school and camp.

If your child has already developed into a bully and you are receiving complaints from parents of your child's playmates, do not despair. The cement has not yet hardened and you can still teach him how to soften his stance towards others. In order to accomplish that goal, you will need to implement all of the following strategies:

1. Display your disapproval. Let your child know that you do not condone his tactics of intimidation. Be specific, citing concrete examples of incidents in which you observed or overheard your child attempting to dominate others. Explain to your child exactly when and where he stepped over the line between legitimate persuasion and excessive coercion.

2. Provide alternatives. Let your child know that there are more acceptable methods of venting his feelings without intimidating his peers. Tell him that he can express his feelings openly to you, for example. Role play for your child how to assert himself without using force.

3. Teach empathy. "How do you think the other boy felt when you grabbed his toy away from him?" is the type of question you need to ask your child. Help him to see the situation from the other child's point of view.

4. Teach consequences. Explain to your child that others will not want to play with or befriend him if he continues to domineer his classmates. Share with him your own experiences from childhood being bullied by the tough kids in your class when you were his age.

If your child has become a victim of intimidation at school or camp, you can help by using all of the following approaches:

1.Teach assertiveness. Your child can learn to be less passive. Share examples of your own successful experiences, sticking up for yourself even when it was difficult for you. Praise your child at home when he makes his first attempts to assert himself with you or another member of the family. Review episodes of exploitation with your child pointing out how he could have handled the situation differently so as not to be pushed around so easily.

2.Desensitize your child to failure. Explain to your child that he should not expect to succeed at every attempt to assert himself. Like any other skill, it will require practice to make it perfect. With patience and encouragement from you, however, your child can learn to stand up to or talk down confrontations.

3.Teach your child how to make friends. Instead of sticking with the one or two close friends he has, encourage your child to widen his social circle. Passive children tend to avoid the social risks involved in making new friends. Explain to your child that having more friends in the group means that he will have more potential allies to rally to his defense if and when he is threatened. Bullies understand this social dynamic and therefore avoid starting up with well-connected members of the group.

4.Teach self-defense. If your child his being verbally attacked, role play for him how to respond more effectively to the insults and indignities. If he is being physically assaulted, arrange for him to take boxing, karate or some other martial arts course. Even if he never uses these skills, they will boost his self-esteem and raise his level of confidence, which may be all that is needed to communicate to the bullies that he is no longer an easy target.

How to Praise Your Kids Effectively

Making House a Home
What Makes Eli Run?
The Tyranny of Materialism
Science Enters the Mysterious Inner World of Consciousness
Comments
MOST POPULAR IN Family
Our privacy policy

What Makes Eli Run?
The Tyranny of Materialism
Science Enters the Mysterious Inner World of Consciousness
BBQ Bourbon Cheese Kugel Recipe
Korach 5782: Visit to Lift the Spirit
That Time The Ivy League Found A Way To Limit Jewish Enrollment
Would You Rather Be Right or Happy?
Korach’s Unique Punishment
Who Was Josephus? The Controversial Backstory of the Famed Historian
Should I Break Up, Get Engaged or Keep Dating?
1 2 3 … 2,912 Next »