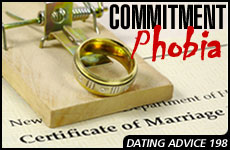 Two near-misses are pointing to a problem. What's at the root?

I have been dating seriously for about four years, and I am beginning to feel that I have serious issues with commitment.

I have broken off an "almost engagement" as well as an actual engagement. I am still reeling from my broken engagement, which took place only a few months ago. When my former fiance and I first started dating, I had a feeling early on that, "I could marry this guy." He took this as a cue to show his willingness to make a commitment. However, I began to feel uncomfortable, and I started finding faults in him.

Because of this, we took a small break, but then we got back together and decided to get engaged. However, I started getting scared again and I begged for time to think about it. I kept worrying, "Why don't I get excited when he is loving towards me? Why can't I reciprocate his love? That must be a bad sign." On the other hand, I thought, "He is such an amazing guy who would make a wonderful husband." I decided my negative feelings were just due to commitment phobia, and proceeded with the engagement.

After our engagement party, I experienced severe ups and downs, including panic attacks and nausea. From any perspective, I had self doubt. I kept thinking, "If I break up with him, I'll regret not having married him," and then, "If I marry him, I might totally regret it!"

My poor fiance had to put up with a rollercoaster ride, and we broke it off.

My poor fiance had to put up with a rollercoaster ride, and the end of the story is we broke it off.

There was a similar pattern with the guy to whom I almost became engaged. I had initial enthusiasm and then I saw faults and problems, especially once we started discussing engagement. I liked him but I kept putting it off until he gave me an ultimatum.

Right now, I feel stuck. Have I made a mistake and missed my soul mate? Or was I right? I'm worried that I'll have these issues with whichever guy I date, and that I'll never break out of this commitment rut. What do you recommend for me?

We believe that your difficulty is more than just a fear of commitment. It is intertwined with your not knowing what to look for in a future spouse, and how to pace yourself when building a relationship that can lead to an enduring marriage.

The pattern you have described is liking someone you date, thinking that this is enough able to build a life with him, and having second thoughts once it gets to the point of commitment. You don't trust your judgment and vacillate between certainty and doubt. One of the main reasons you feel this way is that you have skipped many important steps in the relationship-building process and moved toward commitment too soon.

Marriage involves more than simply liking each other and thinking the other person will be a good spouse. Two people must start with compatible goals and common values, and each should believe that the other has the important personal qualities they want their future spouse to possess. During their courtship, they have to develop respect and admiration for each other, as well as an emotional connection that we term "emotional intimacy," and they have to begin to care about each other. This emerges as the two spend time discussing many aspects about the past, present, and future, and sharing experiences together.

It seems to us that you didn't go through this process. Most people need to see each other in a variety of situations, and feel that they are developing respect, admiration, and feelings of affection for each other. The optimal way of doing this is to date twice a week, and to speak on the phone a few times in between dates. While there is no specific time frame that works for everyone, in our experience couples need to feel that emotional connection, affection, respect, and admiration before they discuss getting married.

You rushed into thinking about engagement far too soon.

With both of the men you describe, you seem to have rushed into thinking about engagement far too soon. It doesn't matter if you did so because you let your emotions "think" for you, or because you felt that you "should" agree to get married because he was a nice guy with all of the right qualities. The bottom line is that you got engaged, or came close to becoming engaged, even though you weren't really sure that this was the right person for you.

Because you were anxious about this, you began to focus on the flaws he had (and we all have them) as a way of "binding" your anxiety. You also began to doubt your feelings for him, feelings that never fully developed in the first place.

Had you paced your dating in a more optimal way, you could have been more certain about your feelings and you would have viewed his faults differently. In other words, you could have been able to see the bigger picture and could either have accepted his imperfections -- along with the qualities you respected, admired, and valued. Or, you could have decided that he was not right for you because all of the ingredients for a healthy relationship weren't present.

Beyond this, you may also have a genuine fear of commitment. The nausea and ambivalence you experienced are often felt by people who second-guess decisions that were made prematurely, but they are also felt by people who are afraid of commitment. The fact that you by-passed the early stages of development might be due to the fact that you are afraid to open up or reveal your inner self. Or, you may not trust your own sense of judgment about marriage, worry that something bad may happen, or fear making the next step because of an unresolved issue from your past. We don't know you well enough to say that any of these scenarios applies to you.

However, we can offer an idea that will help you gain some insight into whether your unproductive dating patterns are intertwined with a fear of commitment. Get a notebook and a pen, set aside some private time, and start to write. Do you have a clear idea of what you would like to do in your life, what you want out of life, and how you would like to get there? Write down your thoughts. Is there unsettled business you feel you need to take care of before you get married? Describe it, as well as your thoughts on why you have not yet addressed these issues, and what it will take for you to be able to do so.

Next, write down what makes you anxious or scared about becoming emotionally close with someone, deciding that he is "the one" for you, becoming engaged, getting married, and being married. Then, go over each item and think about how you can deal with that concern.

If you get stuck at any point in these exercises, or are not happy with your answers, then you may indeed have a problem with commitment. The best way to address such a fear is through short-term, goal-oriented therapy. If you prefer to try to address this issue without therapy, try Dr. Susan Jeffers' book, Feel the Fear and Do It Anyway.