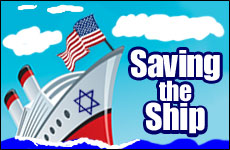 Are we just rearranging the deck chairs?

There is an allegorical story about a luxury passenger ship crossing the Atlantic Ocean that hits an iceberg and begins to sink. On the lower decks, the crew and passengers make a valiant but unsuccessful effort to plug the hole in the ship's hull. On the upper deck, first-class passengers rearrange the deck chairs, sun themselves and play shuffleboard, seemingly oblivious to the disaster around them. Meanwhile, the ship's band plays on.

Of course, had more passengers on the ship attempted to plug the hole, the leak would have been sealed.

After the fact, two absurd stories emerge. Some of the upper-deck passengers say they didn't help because they saw no seeping water and, anyway, the water rushing into the ship's hull below had no direct impact on their well-being. Other first-class passengers said they didn't bother volunteering because they assumed that the efforts of single individuals could make no appreciable difference on the impending disaster.

On March 21, 2008, we celebrate Purim, a holiday that most people equate with masquerades, hamentashen, carnivals, laughter and frivolity.

Across the world, Jews read the Book of Esther, which recounts how the evil Haman, advisor to Persian King Achashverosh, won the king's approval to murder all of the Jews in all of the kingdom's provinces on the 13th of the Hebrew month of Adar. (Ironically, Persia today is called Iran, whose current leadership is still voicing the same dastardly rhetoric.) When Haman's name is recited, the listeners boo and make noises to condemn him into the annals of consummate evil.

Even when daily circumstances overwhelm us, the Purim story teaches determined people can make a difference.

Purim is the only time in Jewish history that all Jews residing in a country were publicly sentenced to die on a certain date with no possibility of appeal. Can anyone begin to imagine the absolute horror, anguish, hopelessness and despair suffered by the Jews of that time who knew that their children, friends and extended families would be killed within one year? There was no forum for judicial appeal that could have saved the Jewish community from this monstrous verdict.

But the Jewish Mordechai, together with his cousin Esther, stood up and acted at risk to their own lives. They were unwilling to sit back and accept the immutability of the royal death sentence. Their heroic actions saved the Jewish community and transformed Purim into a day of rejoicing for Jews for generations to come.

Strangely, the Book of Esther is one of the only books in the Bible that never mentions God's name. Purim's emphasis is on the importance of human, not divine, action. Even when daily circumstances overwhelm us, the Purim story teaches determined people can make a difference.

Esther became queen of the empire because she was fair and beautiful. Living an opulent and luxurious lifestyle in the palace with her maids, jewels and perfumed oils, Esther was like an upper-deck passenger, far away from the concerns of Persia's Jewish community. When Mordechai first approached Esther to intervene with the king and beg him to spare her people from Haman's death decree, Esther's self-preservation instinct told her not to act. After all, she reasoned, her royal standing would insulate her from the death decree. So she refused Mordechai's request to visit the King un-summoned, an act that was punishable by death.

Mordechai finally lost his patience and said: "Do not think in your heart that you will escape in the king's house any more than all the other Jews. For if you remain silent at this time...you and your father's house will perish."

This admonition persuaded Esther to pay the king an unlawful, unsolicited visit, no matter what the personal price. "If I perish, I perish," she resolved. Esther realized that even though she happened to be living in the perceived safety of the king's house, she couldn't ignore her obligation to her fellow Jews. By responding with the words "If I perish, I perish," Esther indicated that she understood that the future of the Jewish people was both a communal obligation and the personal responsibility of every individual Jew.

The Book of Esther is starkly true to life. It does not show Esther acting selflessly and heroically from the beginning. Her first instinct was self-preservation. Only when she understood that she was as vulnerable as the rest of the Jewish community, did she act.

America, as we all know, is a country of individualism. The American hero is the lone, self-reliant soul who pulls himself up by his boot straps, goes from rags to riches and emerges from poverty to the American dream. If we manage to achieve success, we deserve everything we earned and have the right to dispose of it as we wish. If we happen to provide charity to our community, that's very nice, but it's certainly not an obligation.

American individualism has been celebrated and analyzed as far back as in the writings of Alexis de Tocqueville and Ralph Waldo Emerson. While individualism and self-reliance can be commendable traits, success for the sake of success alone, without a sense of obligation to the community, is not the Jewish way.

A fundamental pillar of the Jewish ethos is kol yisrael arevin zeh bizeh, all Jews are responsible for one another and all of our fates are intertwined. We Jews should take pride in our individual achievements and how far we've come; however, we cannot be weak-willed when it comes to fulfilling our communal obligations.

Most of us live in the modern equivalent of a king's house, but we act as if we were the first-class passengers of an ocean liner's upper deck, ignoring the plight of all our fellow passengers.

Everyone recognizes the current existential crisis is Jewish continuity. Study after study, blue-ribbon committee after blue-ribbon committee affirm that a majority of young Jews are walking away from 4,000 years of Jewish heritage and Torah teachings. There is a consensus that Jewish illiteracy and lack of a spiritual connection with God are primary reasons for the mass exodus of our youth.

Notwithstanding the extraordinary success of Jewish day schools in safeguarding Jewish continuity, the current high tuition prevents almost all young families from attending.

It is painfully clear that notwithstanding the extraordinary success of Jewish day schools in safeguarding Jewish continuity, the current high tuition prevents almost all young families from attending. The only children who can get an intensive Jewish education are those from very rich families or those from families willing to make extraordinary financial sacrifices to pay the tuitions.

No one disputes that if a free, high-quality Jewish education were available for all young families that seek it, tens of thousands of children would enroll. Despite these well-known facts, America's Jewish leadership continues with business as usual. There has not been one national rabbinic convention solely convened to address the crisis of funding Jewish education. There has not been one Jewish Federation that has accepted the mandate of funding day school scholarships for all Jewish children in its community.

In many ways, the Jewish community is like a ship. If some of the passengers are sinking, we all sink with them. Jewish continuity is a collective enterprise. We should not act like the people on the upper deck, oblivious to the happenings around us, as if nothing matters unless it impacts us immediately and directly.

For 2,000 years, the entire Jewish community financially obligated itself to pay for the schooling of all of its children. But in 21st century America, this communal social contract has unraveled. We, the wealthiest Jewish community in history, have abandoned our children.

Understanding the lessons of Purim, Mordechai and Esther, each one of us Jews has the individual capacity to make an enormous change in our own community and make a real difference. All we lack is the willpower.

Until we accept the fundamental proposition that funding Jewish education for all of our children is every community's fiscal obligation, all other uses of our communal money are tantamount to futilely rearranging deck chairs on a sinking ocean liner, as the ship's band plays on.

George D. Hanus is chairman of the Superfund for Jewish Education and Continuity, the World Jewish Digest and the Jewish Broadcasting Network.