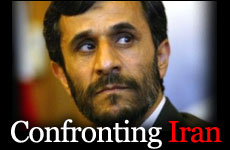 The UN must expel Ahmadinejad's murderous regime, says one of the world's leading moral voices.

Those among us who thought that the victory of allied democracies in 1945 would mark the end of hate and state-sponsored racism were naive. What remains in human memory as the most cruel of conflicts changed neither human nature nor peoples' ambition. Religious wars, political dictatorships, ethnic clashes, sectarian, cultural and economic crises: Their impact affects us all pretty much everywhere on the planet. Our world is still the target of more than one threat. Such is life, that everything comes full circle to start over again.

Yet even in the domain of evil, differences and degrees exist. Certain dictators are worse than others, and their hateful actions have consequences more dangerous.

For the reader who has not yet guessed, I am speaking of the current president of Iran, Mahmoud Ahmadinejad: More than so many others who abuse their position if not their power, this one represents the darkest of political action.

Ridiculing historical truths, offending the memory of survivors still alive, he glorifies the act of lying: As the No. 1 Holocaust denier in the world, an anti-Semite with a disturbed mind, he claims that Hitler's "Final Solution" never happened. He even had a large international exhibition of anti-Holocaust cartoons mounted in Tehran. Several hundred cartoonists participated. When asked about the future, the exhibition organizer states that the project will continue as long as the Jewish state has not been destroyed.

And who will destroy it? On this point, President Ahmadinejad is not afraid to clarify his view: Iran will take the lead. As soon as this Muslim country has acquired a nuclear weapon, the first bombs will be launched on Israel. And he has not ceased to repeat this threat.

I belong to a generation that learned to take the enemy's words of hate seriously.

Consider it this way: According to him, there was no Holocaust in the past, but there is sure to be one and it is on the way. Scandalous rumblings of a fanatic? Yes, but this fanatic addresses crowds that like his ideas and applaud them. Just empty words? No. This orator does not speak for nothing. He seems rather committed to keeping his "promises." It would be wrong to question his determination. A person does not just preach hate for nothing. Isn't his goal to break the heart and snuff the life of anyone who does not think like him? As for me, I belong to a generation that learned to take the enemy's words of hate seriously.

And lest we forget, who is behind the Hezbollah terrorist organization? Iran. Iran sends them the most modern weapons and officers to train their soldiers. But what does Hezbollah want? Territorial concessions? No. The creation of a Palestinian state living side-by-side in peace with the Jewish state? No. The sole objective of this movement - and of the Iranian president - is the destruction of Israel.

This is why I maintain that such a figure does not have a place within the community of international leaders. Persona non grata, an undesirable individual, this is what he should become, because of what he is doing to his country, to his people, to all of humanity. This is why he deserves to be turned away everywhere. I'll go even further: The country he leads and embodies should be excluded from the United Nations as long as he is its ruler and symbol. On what grounds? It is quite simple: One member state of the United Nations that threatens to destroy another member state of these same United Nations violates its very charter and conventions.

Is something like this possible? I am not naive enough to believe that this could really happen. What state would introduce such a UN resolution? And how many delegates would vote to adopt it? I know all too well: very few. But at least they won't feel so comfortable in their fear. At least they'll learn from lessons of the not-so-distant past: We know with whom a dictator will begin; but he will not stop there. If Iran were to have a nuclear weapon, do we really think that Israel would remain its only target?

Some will say: What about North Korea? Why aren't we doing something about them? Don't they have the same atomic ambitions? Yes, they do. But there is still quite a difference. North Korea has never threatened to wipe away another state.

Wiesel, a Holocaust survivor, is author of "Night" and winner of the 1986 Nobel Peace Prize. This article, written for the Daily News, was translated from the French by Jamie Moore.

The Secret to Success

Not So Trivial Pursuit
It Takes A Lot Of Faith To Be An Atheist
How Instagram Brought Back This Nostalgic Soup
What Makes Eli Run?
Comments
MOST POPULAR IN Current Issues
Our privacy policy