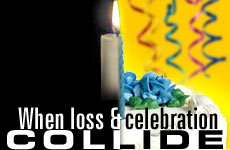 A mother's passing and a son's bar mitzvah create an emotional whirlwind when both run into each other.

Last spring, a friend of mine lost both her parents in a three-month span. To add to this emotional juggernaut, she was planning her son's bar mitzvah at the same time. I told her, "I simply can't imagine how difficult this must be for you."

Soon after, I not only imagined it, I lived something close to it. In May, as I was ordering invitations for my eldest son's bar mitzvah, my mother was discovered to have end-stage cancer. Wrongly told that arthritis explained her severe and unrelenting pain, Mom became alarmingly feeble, her pain unremitting. Further tests done at my sister's and my insistence revealed the harsh reality. Her doctor made a weak excuse for having missed the true cause and then told us, "Take her home and make her comfortable. It's a good time to get out the photo albums and gather the grandchildren around." His prognosis? A few weeks to a few months at best.

My sister and I felt as if we had been hit with an emotional stun gun. Cancer had already claimed our father, aunt, and grandmother. Our only brother had been killed in a car accident more than thirty years before. We could not fathom losing our mother, who had always been so strong both physically and psychologically, and with whom we each enjoyed a close relationship.

My bond with Mom became increasingly intimate in recent years, enhanced in large part by our spending more time together, frequently over Shabbat. Nearly every week, Mom would come over and sit on the same spot on the living room couch as the kids piled around her to show her their school projects, tell her about their week, or have her read them a story. And she greatly enjoyed meeting other guests at our table. As a docent at the Skirball Museum, Mom's knowledge of Jewish history often enlivened our conversations.

I began my campaign to get Mom to come over as often as possible two years earlier, when my mother-in-law, whom we have since lost, was critically ill.

"We only have your dad and my mom left," I told my husband then. "The rest of the week is too hectic for visits. We've got to get them over here for Shabbat." I could never imagine how much more precious this time would become, having had no inkling that it would be so limited.

I could be calling the hospice to inquire about morphine dosages, while also waiting for the bar mitzvah caterer to call back.

After Mom's devastating diagnosis, my sister and I were thrust in a whirlwind of preparing for hospice care in Mom's home. Given her prognosis, we also had to rush and get her business affairs in order. We tried each day to absorb the shock of it all, our expectations of a long future for Mom shattered. I felt I was living a surreal dream, as on any given day I could be calling the hospice nurse to inquire about morphine dosages, while also waiting for the bar mitzvah caterer or photographer to call back.

The day I picked up the invitations I headed out with heavy heart to visit Mom. Thinking of all those crisp, lovely invitations filling several boxes in the car, I began to cry. For much of the drive over the 405, I wondered how I could show them to Mom without breaking down completely. I even considered briefly not showing them to her at all. Yet how could I not show them? Could Mom, despite what the doctor said, survive to see the first of her grandsons step up as a bar mitzvah and read from the Torah? Or might I actually be sitting shiva during the week of this simcha?

During that drive, I decided not only to show Mom the invitations, but also to continue to share with her my plans as they progressed. My mom, always a realist, knew that she might not live to be at the event, but it gave her pleasure to know how the plans were coming along. I steeled myself during my daily drives to remain strong in her presence, and allowed myself to cry alone in the car on the way home. Most of the time, I was able to stick to this plan.

But Mom's deterioration was rapid and inescapable. It seemed nearly impossible for her to make the bar mitzvah. While she didn't tell me directly, she confided in her hospice nurse that she wished I could move the bar mitzvah up.

If Mom couldn't come to the bar mitzvah, we would bring a trial run of the event to her.

When the nurse told me how deeply Mom worried about this, I was crushed. Mom understood that there was no way to move it up. But something had to be done. My husband and I came up with another idea: If Mom couldn't come to the bar mitzvah, we would bring a trial run of the event to her.

We invited the entire family to Mom's house for the following Sunday for brunch and to hear our son, Avi, rehearse his chanting of his Torah portion. Our rabbi, Moshe Cohen of Aish HaTorah Los Angeles, also came, and wrapped Avi's brand-new tefillin on his arm and head for the first time, explaining the significance not only of the tefillin, but also part of the meaning behind Avi's parasha, V'etchanan. In this portion, Moshe recounts his disappointment that despite his fervent pleas, God would not allow him to live to enter the land of Israel. Once again, the 3,000-year-old Torah resonated with our lives today in a way that was too deep for words.

It's a good thing we rushed to put together this trial run. If we had waited even one more week, Mom would have been too weak to appreciate what was happening. We took our last photos with her and the family that day, but I will not look at them often, preferring earlier photos that reflected her life spirit and beautiful glow.

Mom passed away two weeks before Avi's bar mitzvah. My week of shiva coincided with the first nine days of Av, historically a time of tragedy for the Jewish people. When I got up from shiva, I rushed to finish the details of the bar mitzvah that there had been no time for: menu planning, seating arrangements, getting suits tailored.

Fittingly, Avi's bar mitzvah fell on Shabbat Nachamu, the first Shabbat after Tisha B'Av, when the Haftarah reading from Isaiah promises comfort to the Jewish people for all the tragedies that have befallen us: "Comfort, comfort My people, says your God," Avi read, and the promise of comfort for my loss, and for the ongoing heartaches of our people, echoed in my heart and mind.

Many friends offered their own solace to me before and after Mom passed away, assuring me that she would be at the bar mitzvah, no matter what. I know they were right. The day could not have been anything but bittersweet for us, but our pain was somehow balanced by the joy in our son's rite of passage into Jewish manhood, and by the very distinct sensation of Mom's spirit filling the room, emanating from her well-deserved seat in the World to Come.

Judy Gruen will be speaking at the Jewish Community Library on September 11, 2001 at 7:00 p.m., at 6505 Wilshire Blvd. She will be signing her book about motherhood, "Carpool Tunnel Syndrome: Motherhood as Shuttle Diplomacy" which is available at Amazon.com.

Sick of Being Sick

My Sons Were at Meron
The Promise Of The Land
Which Chat Are You On?: Parshas Behar/Lag Ba’Omer
Do You Like Slow-Cooked Food? Thank the Jews
Comments
MOST POPULAR IN Heart of Matter
Our privacy policy