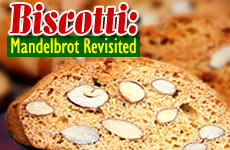 My search for the perfect mandelbrot.

I love mandelbrot. The problem with mandelbrot, Yiddish for "almond bread," is that I can't dip it into my morning coffee or tea without turning it to mush. Even though it's been baked twice, it's still just too tender and full of butter to hold up to that kind of treatment.

About ten years ago, I noticed a new type of mandelbrot making the rounds...Biscotti! Early Biscotti were really just long slices of chocolate chip mandelbrot with an Italian name, meaning "twice cooked." About five years ago, I began collecting, trying and adapting Biscotti recipes. I was out to create a whole painter's palate of sturdier, healthier, more gorgeous Biscotti.

Over the decade, the most noticeable trend in these recipes was a steady decrease in fat content. I immediately incorporated that change. Going from one stick of butter to one or two tablespoons of my choice of oil, i.e. Canola oil, per four dozen Biscotti, was definitely a move in my direction. Every once in a while, I ran into a recipe that asked for baking soda instead of baking powder, but baking soda tasted so industrial to me that I substituted baking powder for it every time and never looked back.

2 3/4 cups of flour is the standard requirement for a batch of four dozen biscotti. Soon, I came to realize that even that requirement could be bent. Treading cautiously, I first replaced the last 3/4-cup of flour with whole-wheat flour. That was a little too heavy, even for the brown rice and granola crowd. Then, I replaced the whole-wheat flour with King Arthur White Whole Wheat flour. Better. Better yet, I then added dried cranberries, sunflower seeds, and yes, some granola, and created a natural, toothsome beauty.

Next, for something a little more Italian-ish, I thought I might risk a polenta biscotti. I substituted polenta for that same 3/4 cup of flour, but this biscotti was just too hard. The next time, I substituted cornmeal for polenta, substituted 1/4 cup honey for one of the eggs, took out some sugar, added pine nuts and raisins and, for a finishing touch, sprinkled European- style raw sugar on top. As I watched the last five minutes of baking from my oven window, the golden hue of the cornmeal bronzed over with a gloss of caramelized sugar. Dipping my biscotti into my latte I mused, "Breakfast in Tuscany."

Looking back, I think "Breakfast in Tuscany" was the breakthrough. After all, if the flour type was negotiable, if sweeteners could be substituted for an egg here and there and if I could keep the various chewy elements to a modest cup to cup and a half per batch, the possibilities were endless.

Biscotti variations take place in step 3 of this recipe. Mix the crunchy ingredients into the dough by hand until they are evenly distributed. Be careful not to over- mix, as this can break up the nuts, smear the color of the fruits into the dough or melt the chocolate. Lots of the variations feature fun toppings that are well worth the trouble. Once you get going with this basic recipe, any dessert concept you find may become your next biscotti.

Make Your Own Ice Cream