Purim & the Secret of Sunsets 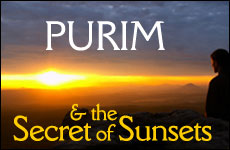 How do we find joy after experiencing such an enormous tragedy?

Last Friday, less than a day after the terror attack at Merkaz HaRav, I saw a beautiful sunset over the Kinneret.

I thought of Adar, joy, and Purim.

And I remembered the lynch...

It was the last day of a frightening 17 days of reserve duty at the start of the Intifada, and I was looking forward to a smooth finish.

It was not to be.

The call came over the army radio at about 10am ... Two soldiers had disappeared in Ramallah.

There was an ominous silence in my jeep... within seconds they told us to cordon off Ramallah while the army tried to locate our boys...

It all happened so quickly...

I was to sit in that jeep for the next 12 hours, watching my windshield, after warnings of possible shooting...

And praying. Praying this be the final scene in the current tragedy.

I'm still praying seven and a half years later...

But my deepest memory of that day was a stunning sunset. Of course you can't describe a sunset, but minutes after the Air Force had bombed selected targets, the sea blue sky was traced with streaks of red and orange.

Another Israeli summer night drew peacefully closer, as if mocking the carnage of the previous hours.

Purim is the festival of sunsets...

I spent Shabbat in the North.

Late afternoon we heard the siren and rushed to shelter while the Katyushas fell not so far from where we were.

The Shabbat afternoon calm and clear blue sky were briefly interrupted by streaks of bloodthirsty metal racing through the heavens, and once again a beautifully blazing sun set on the Day of Peace.

Another sunset following a day of despair and destruction.

And Purim is that sunset.

"When Adar arrives, we increase our joy."

Since the events of last Thursday, the first day of Adar, it's been rather difficult to increase our joy.

But there must be a message there somewhere.

The sun set on the lives of eight families... and the hopes of many more.

The story of Purim teaches us that the way we see the world is not the way it really is.

When everything seems doomed for the Jewish people; with the death sentence hanging over their heads and no salvation in sight, King Ahasuerus cannot sleep. He calls for the Book of Chronicles, hears about Mordechai's efforts to save his life and the rest (as they say) is history.

A string of seemingly mundane, unconnected events ultimately inspire a dramatic turnaround for the Jewish people, and a festival to be celebrated for eternity.

What we thought was bad turned out for the good...

Purim is a festival of sunsets.

A child who sees the sun go down for the first time thinks it's gone for good. Disappeared. Lost forever. Will there be light again?

Hidden, yet revealed somewhere else.

The end of the day yet the beginning of the night.

However we define it, one thing is certain. We know there's going to be a sunset every day.

Sometimes we're not awake for it, or not looking, but it's always there. New York, Melbourne, Jerusalem. London, Johannesburg, Toronto. Wherever you are, there's a sunset every single day.

Because God said so: "And it was evening and it was morning..." (Genesis 1)

A soldier must obey orders. Whether he agrees or not; whether it's convenient or not; whether he understands or not. His life is at stake, and he must accept there are those who have a bigger picture than he.

Today, after Merkaz HaRav and a few days before Purim, we also have a responsibility...

We are all God's soldiers.

He has given us 613 commands. We may not understand them all and some are not always convenient. Some may make us frustrated. But He has the big picture. He only tells us what is absolutely necessary, and He tells us only for our benefit, so we can get the most out of Life.

We do have a refuge, a firm altar of hope.

Whether on the day of the lynch or a day of Katyushas; whether in the brutal murder of eight young Jews or in our own personal lives, we do have a safe and secure refuge.

In the apparent absence of lasting political and military solutions; at a time of evil, death, and despair, we do have a Truth... we do have a Supreme Commander.

Purim is the ultimate proof.

Just stop and look at your sunset tonight... and tell me if I'm wrong.

Kristallnacht: Murder by Euphemism
The Power Of Prayer
Va’etchanan 5782: A for Effort
Can You Show Me This "God?"
Comments
MOST POPULAR IN Israel
Our privacy policy
Aish.com Is Looking for Great Writers