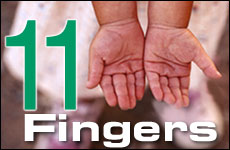 I was watching her in the bath, my little almost-four-year-old who refuses to be called little. Using washing cups, old toothbrushes and a liberal amount of water, she was "baking cakes." Stirring the batter for a chocolate cake with vanilla frosting and colored sprinkles, she informed me that she would make not one, but eleven cakes. She held up her pudgy hands and studied the fingers.

"How many fingers show eleven, Mommy?"

"Well honey, you only have ten fingers. If you want, you can hold up both hands and then just one finger. That would make eleven."

"No," she was getting frustrated at my denseness. "I want to show eleven all at one time. How do I do that?"

"That's impossible sweetie, you only have ten fingers. You have to pick a number lower than eleven or wave your fingers twice."

She sat silent for a moment, digesting this reality of life.

"Do you have eleven fingers Mommy?"

"No, honey, I have ten just like you." This also elicited a moment of silence. Mommy is built just like me. No extra fingers or spare limbs. Mommy is a mortal human just like the rest of us. How strange

While my children are perpetually amazed at what I don't know or can't do, I am continually astonished by the things they consider within my realm of possibility. They are surprised that I don't have a detailed explanation for the inner workings of an air conditioner and that I have no idea how to say hello in Mexican. They mutter when I tell them I can't lift the bike up three flights of stairs alone and look vaguely disappointed when I inform them that I can't fix the broken stereo, and we will have to bring it to a repairman.

I'm Mommy, and Mommy is supposed to know the answers to all and any homework questions, be able to bake and decorate magnificent cakes complete with the cream flowers that Danny's mother makes, and fix everything from broken model airplanes to bruised feelings. While I'm flattered by their endless belief in my abilities, the pleasant feeling dissipates as soon as I remember how few of these feats I can actually accomplish.

You would expect that at some point they would simply give up, realize that I am as fallible as they are, just slightly more skilled, and expect no more. And I'm sure one day they will. But in the meantime, they keep asking, fully expecting me to be capable of wondrous deeds.

The irony of it all is that the acts which in their mind would confer greatness upon me are so far from the ones to which I aspire. It's when you are old enough to do triple digit math in your head that you realize that it's the littlest of things which make the biggest difference. It's when you are tall enough to reach the top cabinet without standing on a chair that you understand that bigness has nothing to do with weight or height, but everything to do with one's heart and mouth, and how one uses the two.

I recently started a two-year weekly parenting class. The fact that I already took this exact class from this exact teacher just several years ago, does make me feel a bit like a child who has failed a grade, but the additional fact that over 50% of the class is also here for round two is a comfort. So, I sit each Wednesday morning, hearing concepts I know so well I could teach them, and implement so little I need to be regularly inspired.

At a recent class, the teacher was discussing the principle of spending time alone with each child. Every child deserves ten uninterrupted minutes of our time each day, she explained passionately, ten minutes during which all attention is focused exclusively on him/her. How those ten minutes are spent is immaterial -- providing the child is enjoying the interaction. It may take the form of playing a board game, baking cookies, or just sitting together in bed and talking.

I had a question. "What if your child has a fascination with military planes and nuclear bombs?" I asked. "My seven-year-old is thrilled if I sit and read him a newspaper article about the weapon situation in Iran, providing I explain what is going on every sentence or so. But there is no interaction, we aren't sharing with each other, it's just me imparting information to him. Is that what these ten minutes should be like?"

"If he likes it, and enjoys that time with you, it's perfectly fine," she answered.

"But there is no give and take," I protested.

I forgot a good deal of the class before I even reached my home, but I doubt I will ever forget that line. For in so many ways, it captured the very essence of true parenting.

While the little people around me think I'm smart if I know the diet of a turtle, they are oblivious to the wisdom I need to react correctly when they throw their food on the floor. While they consider me strong because I can carry a full case of Coke, they know nothing about the strength involved in speaking quietly when all I want to do is yell. But while they may not know of the struggles behind each act, they feel the repercussions. And their faces tell me when Mommy is wonder woman in their world.

"It's not about give and take; it's about give and give." I don't always manage to listen to that inner voice, but on the days I do, it's as though I've magically sprouted an eleventh finger.

Reprinted from the Front Page. 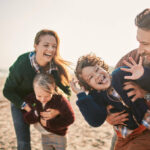