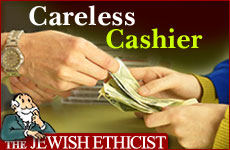 When returning the extra change will get the cashier in trouble.

Q. I just noticed that I got extra change from the store, but I'm afraid that if I return it I'll get the cashier in trouble.

A surprising number of readers asked versions of this question. Jewish law provides a clear expression of the dilemma as well as some useful ideas for a solution.

One basic assumption of the question is that in general we must return excess change. This is borne out by our tradition. "If a payment is found short or over from the amount stipulated, it must be returned. . . One who receives money from another, whether as a sale, or a loan, or a repayment, and finds extra, even if the giver doesn't demand the money, if it is something which could reasonable be a mistake . . . it should be attributed to an error." (1)

The other basic assumption of the question is that it is wrong to get the employee in trouble for a mistake he made. This also is often true. Jewish law creates a balance between the harm done to the person informed on and any constructive benefit achieved by telling his wrongdoing. The Torah tells us: "Don't go about as a talebearer among your people; don't stand idly by the blood of your brother" (Leviticus 19:16). The second half of the verse qualifies the first; we shouldn't spread idle gossip, even if it is harmless, but we shouldn't let this stand in the way of preventing a loss to our fellow man if the information we have is necessary for this.

The principle enunciated by the great recent authority Rabbi Yisrael Meir HaCohen is that informing is permissible if it is done as the only way to achieve a constructive purpose, and if in addition no undeserved loss is caused the person spoken of. So in this case we have to ask a number of questions:

If it is not essential to implicate the cashier, for example if the owner or manager has no way to identify the individual seller, then it is not justified to reveal the name unless it is necessary for a constructive purpose. This might be the case if you think the cashier was careless and would be likely to make similar mistakes in the future. But if it was a mistake that anyone could make occasionally then there is no justification for disclosing the mistake; after all, the mistake did not cost the owner anything and he has no reason for resentment.

If the boss is justified in penalizing the cashier, for example if you feel the cashier was careless or non-professional, and you feel the reaction will be proportionate (a rebuke rather than firing someone summarily) then you don't need to take steps to hide the cashier's identity.

If the boss's reaction is likely to be excessive -- penalizing a harmless routine error, or making an excessive reaction to another error (for example, firing the cashier for this) -- then you should seek a way of returning the money that will not implicate the cashier. One possibility is to wait a few days until the exact time of your purchase will have been forgotten. Or you can make up some other excuse for the payment, for example implying that you got excess change sometime in the past.

This kind of subterfuge, when necessary, is sanctioned in our tradition. The Talmud tells us: "One who steals from his fellow and hides the sum in an [unrelated] bill, has fulfilled his obligation [to return the stolen money]." (2) This is in effect a sanctioned way to return money for someone who for some reason feels unable to return the money outright. The usual example would be someone who feels that being open about returning the money will cause undeserved damage to himself. (For instance, if you accidentally scratch someone's car and you've carefully evaluated the damage, it may be prudent to leave a phone number without identifying details. You want to pay for the damage caused but not open yourself to harassment and litigation.) But the same principle applies if returning the money directly will cause undeserved damage to someone else.

The Jewish Ethicist - The Ethics of Torture
Why Are The Prayers Of Yom Kipur So Repetetive?
Ha'azinu 5783: A Time for Unity!
Twisted Thinking
Comments