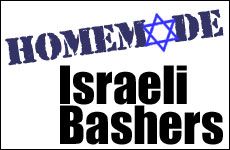 Shortly after I began teaching at Columbia University, I was taken aback to hear that the Iranian ruler Ahmadinejad had been invited to speak on campus. There was hardly any time to organize a protest against the event. Despite this, three kippot-wearing students from Hillel House worked day and night to distribute posters and pamphlets featuring a choice selection of the guest's hate-filled, genocidal invective. They organized a demonstration in front of the hall where the Iranian president was to speak, and all without any outside help.

I spoke at the demonstration, where I discovered that almost all the participants present were local Orthodox Jewish students. The number of secular Israeli students could be counted on the fingers of one hand -- with fingers to spare.

How can she applaud someone that wants to exterminate her?

Inside the hall sat an Israeli student who applauded Ahmadinejad. I asked another Israeli who witnessed this behavior to tell me about her. I asked: How can she applaud someone that wants to exterminate her?

His matter of fact reply: "She's known to be a leftist."

In other words, "leftists" applaud a tyrant, a Nazi, a persecutor of minorities, oppressor of women, stoner of "adulterers," and executioner of homosexuals. If he protests the oppression of the Palestinians, then he must clearly be a member of the "left" and should therefore be cheered.

Later, I encountered other Israeli academicians at Columbia who added more fuel to the fire of hatred against Israel -- all belonged to what is known as the radical Left.

When the semester ended, my wife and I were invited to a Shabbat meal on Friday night prepared by the organizers of the demonstration.

I am a professed and impassioned secular Jew. My Judaism is national and cultural. I believe that my approach is in no way inferior to the Orthodox or haredi one. It contains neither temptations of paradise, the punishment of hell, nor the revival of the dead. It is filled with a rich, multifaceted and wondrous Jewish-Hebrew culture. I also believe that secular humanism is the right answer for us as individuals and as a nation.

But if I had to choose between the kippa-wearing Jews at Columbia and the representatives of what is known in Israel as the radical Left -- I know where my heart is.

That is the entire story.

No, it is the end of the story.

It is also the end of the story of the anti-Israeli squadrons in the Israeli academia.

For some time, I have been waiting for a hysterical outburst from this direction, one that would bring their claims to such an absurd point, that they would be finished. I always believed that their "post-intelligent" anti-Israeli claptrap would eventually climax in a paroxysm of extremist mumbo-jumbo lunacy, after which there would no longer be anything to argue about. They'd be exposed.

Ben-Dror Yemini provided me with just that evidence (Ma'ariv, January 11), in an article in which he tells of a research project carried out by graduate student Tal Nizan at the Hebrew University of Jerusalem. Her research question was: How is it that, contrary to the accepted practice among other occupation armies, the Zionist occupation army does not rape?

The researcher had two explanations: First, IDF soldiers do not rape Palestinian women because for them, these women have been dehumanized, and "consequently, a sexual act cannot be carried out with someone that is perceived as less than human." Second, the soldiers refrained from raping the Palestinian women in the service of a higher, demographic goal, because the rape could cause pregnancies that would subsequently increase the numbers of our enemies. In other words, not only are there no rapes, there are no condoms either.

The significant aspect is not this surreal research project. It is not unusual. Incitement against Israel can be found on the lowest level in some of the social science departments in Israel's universities. A well-known philosopher in Tel Aviv University called Israel the dustbin of Europe -- and students, as we know, are influenced by their teachers, even when the latter are seized by a frenzy of hatred toward the state that provides their livelihood, and at the expense of which, thanks to their attacks on it, they make their names.

The interesting thing is that this "research" project won a prize from a sociology association, with a number of distinguished professors voting in favor of granting the researcher a prize.

It would be interesting to hear how these professors propose that Israel amend this serious flaw, that IDF soldiers are not serial rapists. Does that fact that female tourists are not raped mean that they too have been dehumanized?

These professors are wrong. It's not true that there is no rape. There is -- the rape of the academia, of science and of the students forced to listen to these professors' drivel.

The writer is a professor of law at the Interdisciplinary Center (IDC) Herzliya, a former minister of education and MK, and the recipient of the 2006 Israel Prize in Law.

My Children's Jewish Future
The Blue Beyond
Great Place to Live
Is Eating Supposed To Be Spiritual?
Comments
MOST POPULAR IN Israel
Our privacy policy