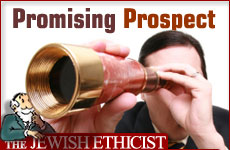 Avoid promises that stretch your capabilities.

Q. We're an innovative technology company. Virtually all our contracts are for products that don't yet exist. The nature of our business is that we can never be 100% sure that the product will be viable. We like to sign a contract only when we're virtually certain that we have the capability to deliver, but sometimes we try to be ambitious. How far can we stretch our promises?

A. There's a clear difference between promising someone a shipment from your warehouse, or even something that's currently rolling off your assembly line, and promising someone a new and untried product. The sages of the Talmud were so concerned about this distinction that they ruled, "A person cannot acquire something that does not exist". (1). For example, if a person sells "whatever fruit my tree produces this season", or sells his right to some court claim (in legal language "subrogation"), the sale is not enforceable. The reason is that this is considered too iffy a proposition for the purchaser to rely on, and for the court to enforce.

However, the fact that the sale is not enforceable doesn't mean that it lacks significance. If the seller promises to sell something he doesn't have but afterwards manages to acquire the object of sale, it is assumed that his acquisition was intended to fulfill his promise to sell, and the original sale becomes valid. (2)

Post-Talmudic authorities inferred from this situation that when there is sufficient reliance, such a sale is binding. For example, Rabbi Israel Isserlin, a prominent early Medieval authority, considered the case of someone who promised a customer a pearl -- a very rare find in Europe in those times. The seller had more difficulty than he expected obtaining a pearl, and he thought that perhaps he was exempt because after all "a person cannot acquire something that does not exist" or something not in the ready possession of the seller. Rabbi Isserlis ruled that the seller cannot renege and must make extraordinary exertions to fulfill his obligation, given that the ordinary exertions he anticipated turned out to be insufficient. (3)

Ambition is not a substitute for reliability.

One prominent authority sums up the principle as follows: If a person simply offers to sell something he doesn't have, it is understood that the buyer is aware that the offer may never materialize. But if the seller makes a specific promise to acquire the object, or if the buyer does not know that the seller doesn't have it, then the buyer is justified in relying on the sale and thus the seller is bound by the deal. (4)

This would apply to your situation. Very often an established firm makes a token order from a new supplier just to see how things turn out. If the service is satisfactory they may then start to increase the order. This is the traditional case of "something not in existence". The contract is not meaningless, and should certainly not be entered into frivolously, but the reliance is minimal and it is understood that the seller may be stretching his abilities somewhat.

But if you are preparing a major order which the customer needs for his own product, and you guarantee delivery, a much higher standard is needed. You should be able to clearly see how each stage of the production will be carried out, leaving room for some surprises. If there are any doubts, you must be open with the customer before signing on the bottom line.

It's good to be ambitious in business. As Robert Browning wrote, "a man's reach should exceed his grasp or what's a heaven for?" But ambition is not a substitute for reliability. Be ambitious when you make internal promises like sales targets or R&D goals. When you deal with customers, you must be businesslike and realistic.

The Jewish Ethicist: Foreign Aid
How I Learned to Love the Multiverse
10 Big Jewish Inventions
A Journey through Jewish Sicily
Comments