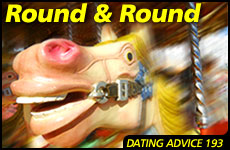 After seven years of constant break-ups, she's wondering whether to give it another chance.

I met a man seven years ago. He was just coming out of a divorce and I fell for him quickly. We went through a few years of a dating rollercoaster.

Now, seven years later and through many changes, the road is leading us back together once again. I am serious about putting all my effort into making this work. Yet still over the last year now we have been off-and-on so many times that I've lost count. The break-ups are accompanied by his statements like, "I love you, but am not in love with you," "I am not ready for a commitment," and "I can never see myself being married again."

So I decided to move on and start dating someone else. Now two weeks later, he says he loves me and wants to make this work.

I am crying myself to sleep because I don't know what to do. I love him, but I no longer trust him. I wonder how long it will be before the next breakup. Perhaps he just feels threatened by me dating and is jealous. He even said, "I know if I don't get it together, one day you are not going to be there."

Now I have met someone whose company I really enjoy. He makes me feel special and gives me proper attention. I am afraid the "rollercoaster guy" is only asking me back out of jealousy. What should I do? I am so confused and feel I have limited time to decide.

When it comes to dating, a person's instincts are not always accurate. But this is one situation where you have to trust your instincts. You've seen this man repeat the same pattern time and time again, and there is no evidence that he has made any change in his way of thinking, that would give you a reason to hope that the two of you might have a future. In fact, something he recently said shows that he's still got the same issue with commitment: "I know if I don't get it together, one day you are not going to be there." "One day" means never.

Now, it would be a different story if he had said to you, "I've been a fool for so long and I've finally realized that we are right for each other and should be together. I'm ready to make a commitment." He's not ready, and he may never be, especially since he isn't even motivated to address the issues that are holding him back. We promise that if you go back to him, you're in for continual repeat performances. (If the first few dozen times didn't convince you already.)

If it will make you feel any better, we don't think that he's trying to get you back because he's jealous. He really does care for you. However, he can't make a commitment, and that means that he's totally wrong for you, and will keep breaking your heart again and again if you let him. (By the way, the "I love you but I am not in love with you" line is really tired and usually comes from people who have overly-romaniticized and unrealistic expectations of what love and marriage are all about.)

He didn't treat you as well as he should, and that is also unlikely to change.

There are other things we sense about this man. First of all, he didn't treat you as well as he should, and that is also unlikely to change. Next, your relationship was way too volatile to have staying power. Even if he were to decide that he wants to be married again, and to marry you, there are probably a lot of issues between you that have the potential of derailing the relationship. You have been dealing with each other on a dating level all these years, but building a life together may be a different story.

Now let's talk about this other man that you're currently dating. It sounds like he has the potential to be a real partner in life. However, in order to devote the emotional energy into developing this further, you have to be willing to let go of your past.

The relationship you develop with the man you will marry -- whether it will be this new beau or someone else -- will have different qualities than the one you ended. The passion may be different, but there will many other aspects that will be enriching and fulfilling. Don't compare one to the other -- look at it for its own sake.

We suggest that you do some writing: List all the positive aspects of your former relationship, and then all of the negatives. Acknowledge the reasons why the two of you do not have a future, and admit that it is over. You can be grateful for the positive aspects of having dated this man, at the same time that you mourn the close of that chapter in your life.

It is only when you are ready to let go that you can move forward.

Dating Maze #237 - Younger Sibling First?
Olivia Newton John’s Grandfather was a Nobel-Prize Winning Jewish Physicist
Don’t Believe in Other Gods Versus God is One
Seeing Without Eyes
Comments
MOST POPULAR IN Dating
Our privacy policy
Aish.com Is Looking for Great Writers