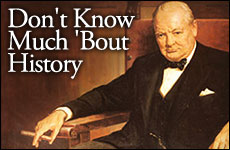 Why God cares if you crack open your history book.

After the war he remained a key figure in British society, and was Prime Minister of England until he retired in 1955, after 55 years of prominence in politics and the military. He won the 1953 Nobel Prize in Literature for his historical writings, and was none other than Sir Winston Leonard Spencer Churchill.

British teens have no idea which historical figures are fact and which are fiction.

Yet today, just a few decades after his death, a quarter of British teens think he never existed. UKTV- Gold, a British television station, surveyed 3,000 teens to determine how they viewed history. The results have stunned the nation, as they display a paucity of basic knowledge that is truly disconcerting. British teens have no idea which historical figures are fact and which are fiction.

Showcasing their greatest lapse in factual information is the mythical King Arthur. 65% of those surveyed believed he was a real king who had a Round Table of knights at Camelot. Next in line is Sherlock Holmes, a fictional detective created by Sir Arthur Conan Doyle. According to 58% of the teens, he truly lived and practiced private investigation out of his home on 221B Baker Street. More than half of those surveyed believed that Robin Hood really existed, slinging from tree to tree in Sherwood Forest, stealing from the rich and giving to the poor.

More disheartening is the fact that these teens believe so many real leaders, heroes, and greats are nothing other than fairy tales. The list of the top ten historical figures believed to be myths includes some of the most famous Britons and world leaders. Richard the Lionhearted, one of England's mightiest kings and conquerors (who unfortunately spilled much Jewish blood in the Third Crusade), is at the top of the list. Mahatma Gandhi, the father of modern India and a pioneer of civil disobedience, Florence Nightingale, the mother of all modern nurses, Cleopatra, the powerful ruler of Ancient Egypt, and Charles Dickens, one of the most illustrious British writers, all find themselves in the wastebasket of history, along with Winston Churchill. Their legacies are all just a myth in the minds of many British youth.

What is causing this massive ignorance? The Daily Telegraph, England's number one newspaper, set out to find out. They discovered that – surprise! -- lack of knowledge is caused by lack of learning. 77% of British teens don't read books with any historical content, and 61% change the channel as soon as any historical programming begins on their telly.

There are many fields of wisdom in the world -- physics, biology, mathematics, music, just to name a few. The Torah does not command us to study these disciplines. We can learn them if they pique our interest, and we should learn them when we need to understand a piece of Torah that requires their knowledge, but the Torah does not instruct Jews to study them. There is however one field of knowledge that Jews are required to study, and that is history.

The Torah tells us, "Remember the days of old, understand the meaning of each generation. Ask your father and he shall instruct you, your elders and they shall tell you..." (Deuteronomy 32:7). The Torah is telling us to study the truths of history, to investigate what happened throughout the centuries.

Why should God care whether or not we know history?

Knowledge of history provides one of the most powerful arguments of God's existence, the ness of the Jewish People, and the truths of the Torah. What makes Judaism different than the all the other religions who claim to be the Truth? What is distinctive about our religion? The Torah gives us a direct clue: "You might inquire about times long past, from the day that God created man on earth, and from one end of heaven to the other: Has there ever been anything like this great thing or has anything like it been heard? Has a people ever heard the voice of God speaking from the midst of the fires as you have heard and survived?" (Deut. 4:32-33)

God is telling us to look at all of history and see if there is any other nation that has ever even made the claim that the Jews make -- that an entire nation experienced national revelation, hearing God speaking to them at once. There hasn't been; it is a claim in the annals of history. No other religion has ever made this best of all claims (they all resort to unverifiable personal revelation) because it is the one claim that can only be made if it is true. (Click here to read a complete description of this argument.) History shows the ness of Judaism.

If one looks at small snippets of time, the Jew may seem weak, dwindling, or doomed. But once we look back at history we can see the dozens of mighty nations that have oppressed us in the past who are now nothing but monuments, tourist traps, and memories, while the Jewish people is as vibrant as ever. Ancient Egypt has its pyramids, Greece has the Parthenon and Acropolis, and Rome has the Coliseum and the Arch of Titus (depicting the Jews exile and the looting of the Second Temple). But the Jews are still alive and kicking. As Mark Twain said, "The Jew saw them all, beat them all, and is now what he always was, exhibiting no decadence, no infirmities of age, no weakening of his parts, no slowing of his energies, no dulling of his alert and aggressive mind. All things are mortal but the Jew; all other forces pass, but he remains. What is the secret of his immortality?"

History shows that the Jewish people are indeed an eternal nation, as God promised, "For I am God, I do not change; you are the children of Jacob, you will not cease to be" (Malachi 3:6).

While some people blur history into fiction and fairy tale into fact, let's make sure we study our Jewish history with a discerning mind. The more we know about our remarkable past, the more vibrant our Jewish future will be.

The Mutation of Anti-Semitism