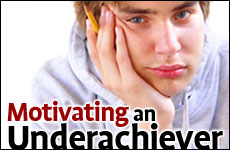 Effective strategies on how to get your child to do better in school.

"Your son is not failing; but I really feel he could do better." "Your daughter's work is satisfactory; but I know she could get higher grades if she tried a little harder."

At P.T.A. meetings the teachers all tell you the same thing. And you know it yourself. Your child is capable of getting higher marks if he would only put in a little more effort. But no matter what you and your spouse try to do, you have failed to motivate your child to improve his schoolwork.

Why does your child perform below his abilities at school? Is your child an underachiever, and if so, what can you do to help your child maximize his potential in school and in life?

WHY SOME CHILDREN FAIL

There are a number of reasons why children sometimes fail to live up to their academic abilities. Understanding these root causes and determining which apply to each child is the first important step towards helping an underachiever.

(1) Not all failing students are truly capable of better school work. Some children sound or appear brighter than they really are. These children unintentionally mislead their teachers and parents into believing that they are capable of earning higher grades when in fact, they are actually doing the best they can.

The only way to know for sure if your child has the intellectual capacity for doing better work at school is to have him evaluated by a learning specialist. The standardized tests which will be administered can remove any doubt about your child's true potential and can help you adjust your expectations, if necessary.

Some children, for example, may suffer from learning disabilities which make it extremely difficult for them to keep up with a regular classroom curriculum. By the time these children reach high school, they may be so discouraged that they have, indeed, given up trying, not because they lack motivation but because they need remediation or special services which they have not yet received.

(2) Some children are unrealistic about their expectations for themselves. These perfectionistic students see only the highest grades as acceptable. These children are also overly self-critical. They have not learned how to accept their own shortcomings without feeling like total failures. If and when they fall short of their unreachable goals, they give up completely and appear unmotivated.

(3) Some children suffer from low self-esteem. They see themselves as inadequate, unsuccessful and incapable of achieving even the most modest goals. In fact, they are so convinced that they will fail, that they often do not seem to have the energy to attempt anything. They do not try to study, socialize or even seek recreation because they believe that their efforts will be wasted.

If you have an underachiever at home, you probably know better than anyone else which strategies will prove to be futile. Just to confirm what you may know already, here is a list of interventions which are most likely to fail:

1. Criticizing, carping and complaining may help you let off steam, but will do more harm than good. If your child suffers from low self-esteem, your verbal attacks will crush his already fragile sense of self.

2. Giving advice may appear more benign, but it is usually just as ineffective as criticism. Especially for high school students, advice is taken as a more subtle form of disapproval.

Even a simple suggestion which begins with, "Why don't you try...," implies to an adolescent that he is inferior to you because he did not think of that on his own.

3. Comparisons to other siblings or classmates can be extremely hurtful and destructive. "Why can't you do x like your sister does?" is the ultimate put-down to any academically struggling child.

4. Even comparisons to yourself will backfire. Statements such as, "I loved math in high school," "I did my homework the first thing when I came home from school," and "I worked hard at school but felt satisfied with my results," only serve to discourage weaker students. Such comments make children feel that they must live up to your standards, which may unrealistic and unreachable for them.

WHAT PARENTS CAN DO

1.Have your child evaluated by a learning specialist. Make sure he does not have any hidden learning disabilities which are being misdiagnosed as lack of motivation.

2. Be sure to praise even the smallest step in the right direction. No improvement, however temporary, should go unnoticed and unacknowledged by you.

Nothing motivates a child more than the prospect of success. Even before report cards are mailed or exams graded, if your child sees that he can earn your approval with a little effort, that will spur him on to even greater achievement.

3. Show your child that you are sincerely interested in whatever interests him. Paying attention to your child's thoughts, preferences and feelings, is the greatest boost you can give to his level of confidence. Fortified with this hike in his self-esteem, he will be more willing to take the risk of trying harder at school.

4. Encourage and support your child's stated goals and aspirations even if you suspect they may never become actualized.

Abe dropped out of high school. He did not work or socialize. He filled each day and much of the night watching TV and listening to the radio. He barely left his room except for meals and meetings with his therapist.

After two years of his self-imposed isolation, Abe announced to his parents his intention to become a psychologist.

Abe felt his father had burst his bubble of enthusiasm. And he stayed in his room almost another two years.

Abe's father meant well, but he misunderstood how weak Abe's sense of self was at that point. Had his father only complimented Abe on his choice of career, for example, it is highly probably that Abe's isolation might have been drastically shortened.

If your child is lacking motivation at school, you cannot do anything to make him motivated any more than you can make grass grow out of the ground. Nevertheless, you can still have a lush, thick lawn if you plant seeds, mix in fertilizer and water the ground thoroughly to provide the optimum conditions for growth to occur.

The same is true for helping your unmotivated child. If you provide the right atmosphere of acceptance and approval, you just may see your underachiever blossom into a successful, productive adult.

4 Ways to Encourage Your Kids to Love One Another

Why doesn't God answer me?

Disciplining Kids Effectively
It Takes A Lot Of Faith To Be An Atheist
How Instagram Brought Back This Nostalgic Soup
What Makes Eli Run?
Comments
MOST POPULAR IN Family
Our privacy policy