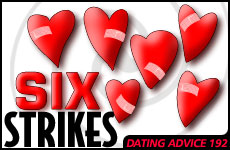 She suspects he may not be faithful. Are six previous marriages any clue?

I have been experiencing a severe level of jealousy if I see an attractive woman when my fiance is around. I instantly get red in the face and start hurling terrible accusations that he is looking at her. I am terribly embarrassed and worse, I am hurting him and pushing him away from me. The one thing that keeps haunting me is that I truly believe that his eyes rivet onto these women. So I am caught in the dilemma of trust and being smart and not getting hurt by being naive.

Please, is there any way I can know if it is me or if he does have extremely heavy sexual energy towards sexy women? I was previously married for 23 years and have been divorced now for three years. He has been married six times.

He promises me and actually has tears in his eyes that I would accuse him of any such desire for anyone else. I am lost, hurt and want and need change. If you can suggest any action that I can take to help I am willing. Is there something I can do to stop this or find out if it is even true?

You are correct that there are ways for a person to address a character trait, to either strengthen a positive trait or try to change the behaviors associated with a negative one. However, before you try to address how to deal with the jealousy you feel, we'd like you to look at the basis for your feelings.

Most women feel uncomfortable when the man they're with takes a second look at an attractive woman. If he stops very quickly and returns his attention to his wife or fiance, she quickly forgets the minor annoyance she felt. Generally, when the man's wife or fiance reacts with resentment, anger, and accusations, she either has an issue with low self-esteem or trust. It is common for someone who has been through a divorce to feel less self-confident and a little unwary about the "competition."

It is common for someone who has been through a divorce to feel more wary about the "competition."

Lack of trust is another reason why you may be feeling jealous. You may have been betrayed by your former husband or another man in the past, and may be over-reacting to your fiance's innocent glances. You might feel less jealous if you work on building your self-esteem. A self-help book may be helpful to you, or this could be addressed with the help of a therapist.

There is also a chance that your fiance has given you reason to mistrust him. Does he act on his attraction to other women? Did he date other women at a time that you believed the two of you were exclusive? Is he exclusive now? Do you worry that it will be difficult for him to remain monogamous? Did his other marriages end because he was unfaithful? If you answer positively to any of these questions, then your problem is more than one of jealousy -- it is a more fundamental problem with this man.

Frankly, we are wary of anyone who has had a number of marriages that ended in divorce -- and we are assuming that is how most or all of your fiance's marriages ended. We often see people like this engage in the same negative pattern of behavior in each relationship. Each marriage ends rather quickly because they never resolved the issue that led to the end of each of the earlier relationships. What has your fiance done to change his life, his attitudes, and his behavior from the time between the end of his sixth marriage to the time he met you? If he hasn't done anything, we worry about the long-term prospects of your upcoming marriage. He may be a very charming man who simply cannot sustain a relationship very long... or he could be someone who exploits vulnerable women and then goes on to the next one.

What has he done to change his attitudes and behavior?

You deserve a man who has the ability to be a loving and faithful partner in a stable, long-term marriage. We would like you to take the time to think about whether your fiance is such a person. Why don't you spend some time alone and write down your thoughts about your fiance's qualities and your expectations for your life together, both positive and negative. Wait a day or two and then review what you've written. It will give you clarity and help you decide if your fiance has the ability to be the husband you want him to be.

We hope that this really is a good man and that you are right for each other. If he isn't, then it is better to realize it before you marry him. And we certainly hope that if you do get married, while you are planning your wedding you also hire a capable family lawyer and draw up a prenuptial agreement that can protect you and any children from your first marriage. Prenuptial agreements aren't just for protection in case a marriage doesn't work out -- they also can be helpful for a couple that stays married for a long time, but is later faced with debt or other financial issues.

We hope this helps you navigate the dating maze,

Dating Advice #216 - Adjustment Period
The Blue Beyond
Great Place to Live
Is Eating Supposed To Be Spiritual?
Comments
MOST POPULAR IN Dating
Our privacy policy