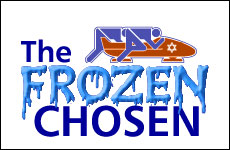 Would you like something to read?"
"Do you have anything light?"
"How about this pamphlet, 'Famous Jewish Sports Legends.'"
-- "Airplane"

Sandy Koufax came along at just the right time. With memories of three-time MVP and World Series Champ Hank Greenberg fading among a new generation of baseball fans, Koufax seized the mantle as the single Jewish athlete who could carry a peoples' dreams. Later, after Koufax retired with his Cy Young awards and World Series Championships, Mark Spitz allowed the Jewish people to cry out, "Dayeinu! If it were not enough that he won seven gold medals, he did it in Munich and he was accepted to dental school!"

But, since Spitz, could the Jews identify a single athlete on whom to pin their hopes and dreams? Sure, there was a professional wrestler named Goldberg, but could we really see this two-hundred and fifty pound muscle-head joining us for a nice bowl of chullent on shabbos? And, after all of this time, maybe one man would not be enough to fill this void? Maybe we would need three men to carry our pride and maybe these three men would need to be wearing spandex.

In the fall of 2002, Aaron Zeff, John Frank and David Greaves decided to be those men and formed the Israeli two-man bobsled team. But, there were a few catches: none of them had experience bobsledding and the Israeli Olympic Committee had never heard of them or the sport.

Greaves's involvement was entirely fortuitous. During a meeting of friends in Las Vegas, Greaves met Aaron Zeff and learned that this former Top Gun fighter pilot, living in San Francisco, was planning to launch the team. Immediately, Greaves lobbied Zeff for a spot and when Zeff hurt his back and could not compete, Greaves got the call. 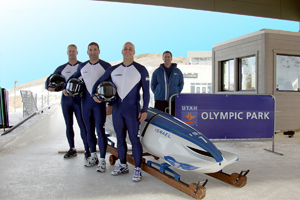 Twenty-four hours later,Greaves - thirty-five years old, recently married and selling business process software in Calgary -- was in a one-piece spandex suit, standing on the Calgary Olympic track. Greaves humbly remembers, "I met the prerequisites - I was in Calgary and I was Jewish." On the track, he introduced himself to his new partner, two-time Superbowl winning tight-end (one with Montana and one with Young) John Frank, now a plastic surgeon in New York.

Greaves and Frank were "forerunning" not competing -- meaning that they were taking a practice run before the actual competitors went down for that weekend's "Calgary Championships". They were like children on bicycles for the first time -- all they really had to do was hang on as someone else pushed them. Nonetheless, such an experience still had its perils, because a bike does not fly down ice at 130 kms per hour. Greaves recalls, "Before that first run, John looked at me and said, 'Gravy, say Shma Israel, and I did....twice."

When one is in a bobsled, the primary objective, even for experienced sledders, is to finish right side up - otherwise the human is no longer an athlete, but a primitive braking system. In this case, by turn seven of fourteen, Frank and Greaves had a four-hundred fifty pound sled on top of them. "I realized that we had crashed when my head was scraping against the ice," Greaves recalls. "What I would soon learn is that even in a good race, we could break some ribs." After that first run, Greaves officially became a member of the team. Who could say no to a man who had taken a faceful of ice for 1.5 kms and was still enthusiastic?

Soon, Zeff, Frank and Greaves, set an audacious goal, for a few guys who collectively had gone down the track fifteen times, never finishing right side up; they set out to compete on behalf of Israel at the World Cup. Because none of them were Israeli citizens, the three took a trip to Israel to make Aliya. "Aaron, John and I walked out of the absorption center, rented a car and gave the shekels we got from the government to Tzedakah."

Next, the three took another important step toward gaining recognition - they established the Israeli Bobsled and Tobogganing Federation, with Aaron's Uncle Oded, a religious real estate developer, as its President. Without a proper athletic body, they would not be recognized by the Federation Internationale de Bobsled et Tobaggane, attend international training and compete on the World Cup Junior circuit.

After months of patiently waiting for the next season to begin, Greaves, Frank and Zeff showed up at international training on a mission. Immediately, they encountered the German team, clad in black Adidas track suits with a twenty person entourage. The Israeli team looked like guests who had been invited to a party, unaware that they were supposed to be wearing costumes.

Greaves recalls that an American coach, Lenny Kasten, walked by and said, "Shalom," his accent revealing that he was a Russian Jew. Kasten looked at Greaves and said, "Do you know where the World Championships are this year? Konigsee." Greaves knew his history and thus knew that Hitler's winter vacation home, Eagle's Nest, was in Konigsee.

At International Training, where world powers like Germany, Canada, Switzerland and Italy fine-tuned their technique, the Israeli team learned to walk alongside the sled and then jump in while it was moving. Regardless of their technique, as long as they completed the training sessions, which they did by virtue of attending, they were able to join the America's Cup junior circuit, compete in a series of three qualifying races on Olympic Tracks in Calgary, Park City and Lake Placid and, if they finished right side up five times, they would ultimately join the World Cup Circuit that year.

In Calgary, they had two runs and not only do they finish, they medaled. In Park City and Lake Placid, they also completed their runs and finished 5th overall on the Junior Circuit. So, this band of outsiders, the "Frozen Chosen," had met the qualification standard and joined the World Cup circuit in Konigsee, alongside Olympic champions.

"Frozen Chosen," had met the qualification standard and joined the World Cup circuit in Konigsee, alongside Olympic champions.

Wearing white spandex suits with blue ISRs across their chests and competing with a sled with the Israeli flag painted on it, the Israeli team gets to hear Hatikvah being played. Greaves describes "chills" as he speaks of the emotion released when watching elderly Germans coming to cheer them on. "I never thought that the best thing I could do for Eretz Israel was ride in the back of a bobsled."

The Israeli team ultimately came in 36th of 39 teams, finishing 3.5 seconds behind the first place finishers and their season ended. Ultimately, the training schedules, separation and bureaucratic hassles meant that the team, which came so far, needed to disband. Still, Greaves has no regrets, "We raised awareness of bobsledding in Israel and Israel through bobsledding."

They may not have clubbed 58 homers, pitched four no-hitters, won seven gold medals or bodyslammed the Rock, but the Frozen Chosen were true Jewish athletes - the kind that you would definitely want to have over for chullent on shabbos.