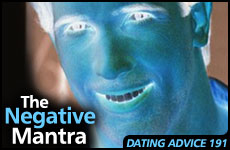 She lived through her parents' bitter divorce. Now she's wondering if any man can be trusted.

I'm 21 years old and already I'm bitter about dating. I think the main reason is the continuous message I heard from my mother while growing up, that "men are lousy." My parents are divorced and as the eldest I was exposed to all the bitterness and hurt preceding the divorce.

As much as my mother repeated the evil mantra, I rejected that as just a result of her bitterness, and I forced myself to believe there are some great guys out there. For a while I was successful. I had some serious dating experiences with guys that I liked and admired and saw clearly that men aren't so bad! But when these courtships soured, they both acted like complete jerks and ruined my view of who they are. In both instances I was devastated at the time, but then tried as hard as I could to get back into the swing of things. I've had a few dates since, but they haven't led anywhere.

Lately I find that I don't want to date. Every guy that is suggested to me, no matter how great he sounds and I'm sure he is, I am just so negative about it and I don't want to go. I just have a bad taste in my mouth from guys and I can't find one male in my life who hasn't let me down.

I'm negative and hurt and I don't want to be. What should I do? Should I force myself to keep on dating? Or should I take a break and hope that this feeling passes? I'm just scared that it won't.

While it hurts us to hear a young person's view of life and marriage colored by so much bitterness and pessimism, your writing to us is an important first step to resolving this impediment to your future happiness. You are fortunate to have figured out, at an early point in your life, the challenge that you must confront, as well as its basis, which is not something that everyone is capable of doing. This insight is going to be very helpful to you. We'd like to assure you that we have worked with many people who have overcome similar challenges and believe that you, too, will be able to undergo a metamorphosis that will positively impact your ability to have a healthy, loving and enduring marriage.

You are correct that your parent's divorce and the way your mother handled the aftermath had a great deal of influence on your attitude toward men and marriage. Parents, while generally well-intentioned, do not realize the far-reaching affect that their attitudes and words have on their children. Your mother has undoubtedly had many difficulties in her life, and one of her ways of coping with them involved describing her experiences and vocalizing her anger in your presence. We cannot blame her for trying to cope the best she could, and we imagine that had she foreseen how her behavior contributed to the difficulties you are now having, she would have tried to do things differently.

It seems that your mother's mantra lay in the background of dating experiences.

It seems that your mother's mantra has not only reared its ugly head recently. More likely it lay in the background of your early dating experiences, the ones that you described so positively. Those courtships, which took place at a relatively young age, should have given you a positive outlook toward what adult courtship could be like. Perhaps you unconsciously expected that the young men you were dating were too good to be true, and now blame the break-ups on some defect in their character. Is that why you write that you can't find one male in your life who hasn't let you down?

The connection between this damaging philosophy and your current dating history is more clear. You won't let yourself get involved with a man who seems to have good qualities, because you suspect he will undoubtedly disappoint you down the line. At the same time, you may have started to date men who you sensed from the beginning would disappoint you. You may have preferred that your expectations for the worst come true, rather than hope that something would turn out right but later be disappointed.

There's something else you haven't mentioned, that we're pretty sure has a significant effect on your outlook and expectations, and that is the history of your relationship with your father. The father-daughter relationship has at least as important a role as the mother-daughter relationship in the daughter's attitude toward trust and emotional intimacy. It would be worthwhile for you to examine this, perhaps with the aid of a competent therapist.

All that being said, the fact is that your background doesn't have to be a recipe for failed relationships. However, your attitude about men won't change simply because you decide to stop dating for a while and recharge your batteries (although we certainly agree that when you feel so bitter and negative, you should not be dating). You'll need a plan of action, and we're going to suggest a number of steps you can take to help change your outlook and expectations about men and marriage.

Your keen insight (that we referred to earlier) and the fact that you are a young adult whose sense of self, intellect, morality, judgment, ability to cope, and even personality are continuing to develop. It is easier to incorporate these changes at this point in your life than later.

1) Take a break from dating for the next few months, but use it in a positive way. Find something fun, interesting, or creative that you know that you enjoy doing, or always wanted to learn, or haven't had the time to undertake. Spend a few hours each week pursuing it. A new hobby, creative venue, athletic outlet, or intellectual interest can enrich your life and improve your sense of self-esteem.

Spend time with positive couples and observe their behavior.

2) Find positive role models in three arenas: married couples, girlfriends, and men. We cannot over-emphasize how important this is. Environment has a big influence on our way of thinking. Hopefully, you know at least one married couple who appears to be kind and considerate toward each other, enjoys each other's company, is able to resolve their differences in a positive way. Spend time with these people and observe their behavior. They may be in your family or your neighborhood, they may be friends or friend's parents, they may be the local rabbi and his wife. If you don't know a couple like this, we encourage you to seek one out. These role models will help you understand how partners in a healthy marriage relate to each other, and in the future you can model some of your own behaviors after them.

Your own girlfriends are an important factor in your environment. Women who spend a lot of their time together badmouthing the guys they have dated and relating unpleasant experiences, reinforce their own negative views and create a self-defeating atmosphere. When you spend time with your friends, steer the conversation away from gossip and "war stories," and focus on other aspects of your lives. If your friends are stuck in a rut of negativity, you have to find a social circle of people who are more positive.

You probably come into contact with a lot of agreeable men in the course of your school, work, and day-to-day life. However, you've been primed to look at their flaws and weaknesses, and over the next several months we'd like you to try to view them through a different lens. When you talk to a classmate, co-worker, or friend, concentrate on seeking out his good qualities. Is he courteous, does he treat other people with respect, does he offer to help people out, is he responsible, does he follow through on what he says he will do, does he engage in acts of kindness, how does he handle money, what is his attitude toward his work or school, does he have a positive attitude about life? When seeking the admirable qualities in another person, you'll usually find them.

Everyone has negative qualities as well as positive ones. Husbands and wives sometimes disappoint each other, they sometimes say hurtful things, and they sometimes make mistakes. But in a healthy relationship they learn to be primarily supportive, forgiving, encouraging, respectful, understanding, and loving -- even though there are times they are angry with each other, under stress, or unable to resolve an issue satisfactorily. Over time, you may be able to have a better understanding of what it means to have a "normal" relationship and to see men in a more positive light.

3) From what you have written we believe that you may benefit from therapy to help you address the difficulty you have trusting men and separating what you logically know is the truth (that there are many good men out there) from the attitude you have been conditioned to follow. What we suggest is that you follow our first two recommendations for a few months and see if you are making progress toward improving your attitude toward trusting men, and strengthening your belief that you can be part of a healthy marriage someday.

If you aren't making progress, or the steps you are taking toward improvement are slower than you want them to be, we recommend that you find a competent therapist to address these issues. Either way, the efforts that you make on your own, before seeking intervention, will make it easier for you to work through these issues once you are in therapy.

We hope this helps you navigate the dating maze,

Dating Advice #246 - Perfect on Paper
Should I Break Up, Get Engaged or Keep Dating?
Time Is Your Precious Commodity
A Constant World in Flux
Comments
MOST POPULAR IN Dating
Our privacy policy