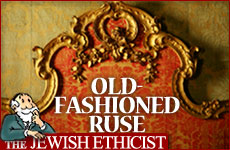 Do I have to tell my customers the "antiques" are new?

Q. I have a business selling art objects. Some objects are contemporary, while others are genuine antiques. A few are new objects which are carefully crafted to seem old. I don't want to mislead the customer and call them antiques, but it seems unfair to describe them as "fakes" since many customers want this look.

A. Your dilemma is far from new. In fact, the Talmud discusses an almost identical dilemma which faced the butchers of Babylonia over a thousand years ago.

While the Jewish butchers would generally sell only kosher meat, occasionally the animals would be found with disqualifying blemishes or for some other reason kosher meat was unavailable. In this case, the butchers would stay open and sell the non-kosher meat to non-Jews. However, the rabbinic authorities affirmed that since the customers were accustomed to obtaining kosher meat, which is considered of higher value, the butchers are obligated to tell even the non-Jewish customers that the meat is not kosher.

We see right away that it is forbidden to sell someone one item when he thinks he is getting something else -- even if the difference is not visible or functional. Non-Jews are allowed to eat non-kosher meat, and antique-style pieces are generally as attractive and functional as true antiques, but since a premium is paid for the real thing the customer must be informed.

The customer must know if the antiques are genuine.

The Talmud then wonders: "How do we announce?" Rav Yitzchak bar Yosef replies: "Meat for the soldiers has arrived". Rav Yitzchak's reasoning is that the average customer will realize that Babylonian soldiers generally don't insist on kosher meat. The Talmud suggests, "Why don't we just announce, 'Treif (carrion) meat has arrived?'" If we are already in the business of informing the public, we may as well call a spade a spade. The reply is: "No one will buy." Calling the unkosher meat "carrion" is more than informing; it gives an unnecessary negative association to the meat. The objection is raised: "But you are misleading them!" Some customers will not get the "meat for the soldiers" hint. The Talmud replies, "They are misleading themselves." As long as the announcement is comprehensible to the average person, it is fair that the customer take at least minimal responsibility to consider the import of the unusual announcement. If the customer isn't willing to make even this minimum effort, then we don't have to go out of our way to inform them, at the expense of endangering our other customers by use of a repulsive name.

We could make an almost exact parallel to your case. Certainly the customer must know if the antiques are genuine. How do we inform? Use some delicate but transparent euphemism: "Antique-look pieces"; "Stressed furniture"; "Edwardian style", etc.

Why don't we just say "Fake antiques"? That's unfair to you, the seller; the word "fake" will offend customers unnecessarily. Is this then misleading the buyer? Not really. Any customer who fails to realize that "Edwardian style" doesn't imply a 100-year old piece is just not exercising minimal diligence and is fooling himself.