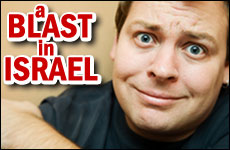 Most people don't hear that before they go on a family vacation. Then again, most families don't go on vacations to Israel right after the conflict with Hezbollah. Well, my family did.

My brother lives in Modi'in, Israel and wanted us to visit him for his 30th birthday. We'd been there before, so we booked the trip without hesitation. Then, violence erupted. Rockets flew. People died. We had a vacation planned, but Hezbollah didn't seem to care. Suddenly, our trip didn't seem like such a good idea. Doubts began creeping into our minds, well, at least mine.

I'll admit it; I'm not the bravest person around. I'm scared of birds. I'm not kidding. If pigeons are walking on the sidewalk around me, I get uncomfortable, sweaty, sometimes even switching sides of the street to avoid them. So, as you can imagine, I wasn't too enthused about going to Israel during a war. I started watching CNN obsessively. I wanted Anderson Cooper to tell me that everything would be okay. Well, he didn't. Instead, I watched footage of things getting blown up, buildings burning, and people dying. Not my idea of a vacation.

I started believing people when they told me I was going to die. I looked at the trip like skydiving. Why tempt fate? Why put myself in harm's way? So, I began calling my parents. "What are we doing? We can't go. Why can't we cancel and go to Florida?" I tried reasoning with them. "Mom, if there was a war in Texas, would you fly to Texas?" I even joked about calling child services to tell them that my parents were making me go to a war-torn country.

My mother told me to stop being a baby. What happened to the lady who wouldn't let me play tackle football because I might get hurt?

My mother told me to stop being a baby. She kept saying, "You can do what you want, but I'm going." My own mother, calling me out. What happened to the lady who wouldn't let me play tackle football because I might get hurt? Where was the overprotective Jewish mother who always reminded me to wear my jacket?

Right before our trip, Israel and Lebanon agreed to a ceasefire. I still wasn't jumping for joy, but I decided to go. I mean, if my whole family died on the trip, I didn't want to be the sole survivor. What fun is inheriting all of your family's stuff when you have no one to enjoy it with? I'm not about to sit alone at my new dining room table on my first family-less Thanksgiving. So, I was in. Next stop, the holy land.

My brother and his wife greeted us at the airport in Tel Aviv. I was shocked to see other people flying into Israel. I figured we'd be the only idiots risking our lives. Definitely not the first time I'd be proven wrong on the trip.

We went to the beach, and there were people everywhere. We went to the movies, and it was packed. I'm an American. When things go wrong here, people lay low. Not Israelis; they've grown up differently. If they stayed home every time something went wrong, they'd barely see the light of day.

We spent ten days in Israel and had a blast, not a literal one either. My family and I had quite the vacation. We were all over Israel, and not once were we in danger (pay attention people who keep asking me). Well, actually, we almost died once, but only because my dad turned the wrong way down a one-way street. Other than that mishap, I never felt like I was going to die, and that's a bold statement coming from me. I didn't see any rockets. I didn't hear gunfire. No one died in my vicinity. I'll tell you what I did see: beaches, the beautiful country of Israel, and way too much of my family.

I learned a lesson. You can't spend your life asking "What if?" The only question I'm asking now is when can I go back?

Jeff Danis is a standup comic and writer in Los Angeles

Dear Citizen of Gaza
Seeing Without Eyes
Why Shouldn’t We Eat Whatever We Want?
The Power Of Prayer
Comments
MOST POPULAR IN Israel
Our privacy policy
Aish.com Is Looking for Great Writers