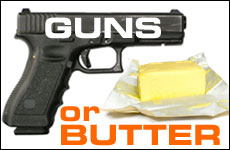 How I became Prime Minister of Japan for an hour and nearly achieved world peace.

A college senior's experience in an upper-division seminar in sociology depends primarily on one factor: the professor. I had the best.

I had never had an instructor like Professor Dukes. On the surface, he often didn't seem to teach. If he came into the classroom and found the students immersed in conversation, he might listen in for a while, and, then gradually enter into the conversation himself and steer it in a direction relevant to the broader aims of the course. His breezy style created an atmosphere where all his students felt themselves participants, rather than pupils, and for years after graduation I found my thoughts drifting back to sociology and Richard Dukes.

But one class in particular has stuck in my memory. That was the day Professor Dukes came into the room with a board game tucked under his arm. On the cover was printed the name Guns or Butter.

The premise of the game was simple. The class was divided up into four groups, each representing a different, fictitious nation. The objective was for each group to build up its nation, attempting to balance external security through a strong military -- guns -- with internal security through social programs -- butter. Two countries were superpowers in the midst of a cold war, similar to the United States and the Soviet Union. One was an impoverished, third world agrarian country. And one was an emerging industrial nation, like Japan after World War II.

I became Prime Minister of Japan.

It was neither my political savvy nor my popularity that won me the job. When my group received its assignment and our members looked around uneasily at one another, I took the initiative to ask, "Who wants to be Prime Minister?"

The ayes had it.

HOLDING THE REINS OF POWER

So I appointed my cabinet and began issuing directives. I instructed my foreign minister to negotiate peace treaties with the two superpowers; I dispatched my minister of commerce to circulate among the other nations and secure as many trade contracts as possible; and I ordered my minister of defense to build up our military as effectively as possible without compromising our economic development.

We could expand education, promote family structure, create incentives and opportunities for employment, and begin to eliminate poverty. But they had other ideas.

Fearful of one another, the superpowers poured their entire budget into defense. With no economic infrastructure, the third world country stagnated. In contrast, our emerging economy exploded. By the end of the game, after the equivalent of 50 years, my country had the largest economy and the most powerful military in the world.

But I'm getting ahead of myself. The growth of our nation was astonishing. Driven by economic opportunity and fear of our precarious position between two industrial and military giants, my minister of commerce pushed through trade negotiations that sparked our own industrial and economic revolutions. After four turns, we had more money than we knew what to do with, and a military that rivaled those of the superpowers.

As a conservative hawk (son of a conservative hawk), I had originally looked at my country's economic development as the key to military security. With that achieved, however, I began to see new possibilities. Why not use more of our profits for social programs? We could expand education, promote family structure, create incentives and opportunities for employment, and begin to eliminate poverty.

This is what I told my cabinet.

THE PSYCHOLOGY OF INSURRECTION

But they had other ideas. "We won't have real security until we have The Bomb," declared my defense minister, suddenly turning against me.

"We don't need The Bomb," I argued back. "Neither of the superpowers is powerful enough to attack us, they distrust each other too much to ally against us, and three equally balanced superpowers will produce a safer world than two. We can secure a safer world while doing what's best for our own people."

But he was not to be dissuaded, and neither were the others. The minister of defense called for a vote of no-confidence, and my cabinet unanimously threw me out of office and pursued its quest for nuclear superiority. Had the game continued for a few more turns, I have no doubt they would have started World War III.

A good leader cannot afford to place too much value on any single consideration. He must keep track of the details, but his first priority is to keep his ship of state on course so that it reaches its destination by fulfilling its national mission. If he loses his sense of direction, he will surely lead his people into confusion and self-destruction.

THE JOURNEY TO REACH SAFE HARBOR

The Jewish nation has its own mission, its own reason for existence. "And you will be to Me a kingdom of priests and a holy nation -- these are the words that you [Moses] must speak to the Children of Israel" (Exodus, 19:6).

Every Jew has the responsibility to become a spiritual leader and teach through example.

In the days when the Jewish people flourished in their own land, it was the priests -- the kohanim -- who guided the nation toward the fulfillment of its spiritual mission. Supported by a national priestly tithe and lacking a portion in the land of Israel, the kohanim were free from the distractions of daily toil in pursuit of material sustenance. Their sole focus was spiritual, and they were charged with awakening within their people an awareness that material involvement and prosperity are merely the means to a higher end.

By internalizing this lesson, the Jewish people themselves become a nation of priests, ministering at the altar of the world by inspiring the nations with the lessons they have learned from their own spiritual mentors. Every single Jew has the responsibility to become a spiritual leader, teaching through example so that all those with whom he comes in contact may be inspired to strive for higher ideals and loftier goals.

Just as leaders in business, in government, and in the military must guard themselves against becoming so lost in the details that they forget their real purpose, so too must those of us charged with spiritual leadership guard against becoming so distracted by the details of material survival that we forget the mission with which the Almighty has charged us. Each of us is chief executive over himself, and each of us must coordinate a cabinet of "ministers," all of whom see only their own individual pieces of the picture and act without knowledge of the picture as a whole.

The arguments of these "ministers" are often compelling. They urge us to seek material comfort and security, to pursue physical pleasures and rewards. But when we remember that we are the priests of the Almighty's kingdom, then we will remain focused on our true mission and, by elevating the world around us, we will experience the reward of true meaning and eternal success.

Who Wants To Be An Anti-Semite?

Battling Deceptive Missionary Tactics
Don’t Believe in Other Gods Versus God is One
Seeing Without Eyes
Why Shouldn’t We Eat Whatever We Want?
Comments
MOST POPULAR IN Israel
Our privacy policy
Aish.com Is Looking for Great Writers