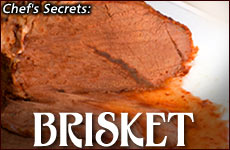 In Israel we eat a lot of chicken and turkey. Red meat is not as available -- the price is higher and the quality is lower.

One cut of meat in Israel is available at a reasonable price: Brisket, or colloquially known as "Number 3." Many Israelis don't know what to do with it. If you don't know that brisket requires long, slow cooking, then you end up with a chewy, tough piece of meat.

My mother used to make brisket for our traditional Friday night meals. She cooked it until it was soft and it was even better the next day as leftovers.

Brisket is the breast section under the first five ribs. It is divided into two sections, flat cut and more flavorful point cut.

Here are some great recipes, including my wife's favorite brisket.

Place pan in oven and bake for 3 hours. Check to see if tender. If not, bake additional 1/2 hour or until tender.

Stir together all sauce ingredients until sugar is dissolved.

Preheat oven to 350°F. Pat brisket dry and sprinkle with salt and pepper. Heat oil in a 6- to 8-qt. wide heavy pot over moderately high heat until hot but not smoking, then brown meat well on all sides, about 10 minutes total. Transfer with tongs to a platter.

Cook onions with bay leaf in fat remaining in pot over moderate heat, stirring occasionally, until golden, 10-12 minutes. Remove from heat and transfer half of onions to a bowl. Arrange brisket over onions in pot, then top with remaining onions. Add beer, bouillon cube, and vinegar (liquid should come about halfway up sides of meat) and bring to a boil.

Cover pot and braise in middle of oven until meat is very tender, 3-3 1/2 hours. Cool in sauce, uncovered, 30 minutes.

Transfer brisket to a clean cutting board. Skim off any fat from sauce, then season with salt and pepper. Slice meat across the grain and serve with sauce.

NOTE: Brisket improves in flavor if braised two days ahead. Cool in sauce, uncovered, then chill. Slice cold meat across the grain and reheat in oven with sauce in a shallow baking pan, covered, 45 minutes.

While brisket is roasting, in a large heavy skillet cook onions in remaining two tbsps. oil over moderately high heat, stirring, until softened and beginning to turn golden. Reduce heat and cook onions, stirring occasionally and reducing heat if necessary, until deep golden, about 20 minutes more. Stir in garlic, paprika, salt, and pepper and cook one minute. Stir in three cups water and bring to a boil.

Spoon onion over brisket and bake, covered, with lid 1/2 inch ajar, 3 1/2 hours, or until brisket is tender. (Check pan every hour and if necessary add more water.) Remove brisket from oven and let cool in onion mixture 1 hour.

Preheat oven to 350°F. Slice brisket against the grain (thick or thin, as you prefer). In a large ovenproof skillet heat gravy until hot, add brisket and heat in oven 30 minutes.

Position rack in bottom third of oven and preheat to 300°F. Heat oil in heavy large ovenproof pot over medium-high heat. Sprinkle brisket all over with salt and pepper. Add brisket to pot and saute until brown, about 5 minutes per side. Transfer to plate, fat side up; spread with reserved 1 tbsp. apricot mixture. Add onions to same pot. Saute over medium-high heat 5 minutes. Add carrots, ginger, coriander, cayenne pepper, remaining 6 garlic cloves and 2 1/2 tsps. cumin; saute 3 minutes. Add wine and boil until reduced almost to glaze, stirring up any browned bits, about 5 minutes. Return brisket to pot. Add stock and bring to simmer, Spoon some of vegetable mixture over brisket.

Slice brisket thinly across grain. Bring gravy in pot to boil over medium-high heat. Boil to thicken slightly, if desired. Season gravy with salt and pepper. Arrange sliced brisket in large ovenproof dish. Spoon gravy over. Cover with foil. (Can be made 2 days ahead; refrigerate.)

Re-warm covered brisket in 350°F oven about 30 minutes (or 40 minutes if chilled). Sprinkle with cilantro and serve.

Kosher By Design: Teens and 20-Somethings

Snacks and Breakfast Recipes for Passover

Couscous? It Sure Doesn't Look Jewish

Easy as Pie
Bechukotai 5782: Divine Retribution
Behar 5782: Working to Live or Living to Work?
The Wholeness of Being Broken
Comments
MOST POPULAR IN Kosher Recipes
Our privacy policy