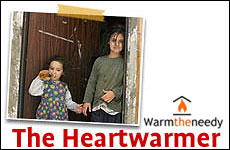 Recently married, Hershel Puretz, 25, had moved from Brooklyn to Jerusalem and was studying in a yeshiva, minding his own business, enjoying the comfort of his centrally-heated apartment in the winter of 2004, when someone told him about families with small children who were cold.

Most Israeli families live in apartment buildings without central heating, so they purchase space heaters. When Hershel heard about the plight of three dozen families living in an apartment block nearby who couldn't afford to buy heaters, his heart went out to them, and his feet followed. Hershel arranged to purchase 40 oil-filled electric radiators, the best and safest heating solution, at cost. He distributed these heaters to the needy families, felt good that he had done a mitzvah, and resumed his own life, or tried to.

Hershel could have said, "I'm sorry. It's not my business." Instead, he made it his business.

Word about the free heaters, however, had gotten out to other shivering families. Hershel's phone kept ringing. Elderly people. Young couples with newborn babies. Indigent families who could barely afford food and rent, whose children slept in their tattered coats. People for whom cold could mean not only discomfort but also illness, or even death. Hershel could have said, "I'm sorry. It's not my business." Instead, he made it his business. By the end of that winter, raising funds from wherever he could, Hershel had distributed 100 heaters.

Hershel Puretz was not looking for this mitzvah, but the mitzvah found him. Some people achieve greatness simply by saying, "Yes." 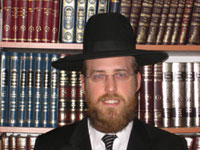 Hershel approached the Israel Electric Corporation, one of Israel's last remaining government-owned companies. He asked that he be allowed to pay part of the electric bill, equivalent to the average heating cost, for particular indigent families. The electric company refused. Their computers did not permit the possibility of paying partial bills. Besides, in a society as fractured between religious and secular as Israel's, the management of the electric company looked askance at this obviously religious Jew.

Hershel persisted, and eventually his sincerity and compassion won them over. The Israel Electric Corporation overhauled their computer system to make it compatible with Hershel's requirements. Today Hershel's one-man operation, Warm the Needy, M'hammimei Lev, Warmers of the Heart) pays 400 shekels [$100] bimonthly toward the electric bills of large families and 250 shekels [$65] for small families and elderly couples.

To date, seven people, including one baby, have died of hypothermia.

This is Israel's coldest winter in 30 years. Sub-freezing temperatures have swept the normally mild coastal plain, while frigid conditions have gripped the hill-cities of Jerusalem, Safed, and the northern region. To date, seven people, including one baby, have died of hypothermia.

One out of three Israeli children goes to sleep cold at night. Thousands of children suffer from chronic illnesses in the winter due to lack of adequate heating.

This winter, Hershel's hotline has fielded requests for help from 400 families from throughout Israel. A Jerusalem family reported that their nine-month-old baby is in the hospital with pneumonia; their low-income building originally had a heating system, but when it broke, the neighbors couldn't afford to replace it. An elderly woman who emigrated from Russia and who lives with her even more elderly mother explained that she had a heater, but it burnt out. A family in the northern city of Safed told Hershel that their refrigerator is 5 degrees Celsius and their apartment is 3 degrees. Every family that applies for help is validated by a social worker who is personally acquainted with their situation. To date Warm the Needy has helped almost 2,000 families.

Hershel is on the phone till 2 A.M. every night trying to raise money to cover Warm the Needy's expenses, which this year will come to $150,000. He takes not a penny for himself, so 100% of donations go directly to pay for heaters and electricity. [Click here to donate: www.warmtheneedy.org ]

Hershel Puretz was minding his own business when the plight of heaterless families came to his attention. He made it his business, not his full-time occupation, but his every spare moment business. Some people achieve greatness simply by saying, "Yes."