The Jewish Ethicist - Adding to Your Data Base 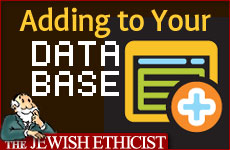 Can we solicit recipients of condolence cards from our charity?

Q. People sometimes make donations to our organization in someone's memory and ask us to send a condolence card to the bereaved. Can we add the recipient's contact information to our data base in order to request a donation in the future?

This is a complex question. In general Jewish tradition is very protective of people's privacy. The laws of forbidden speech prohibit not only outright slander but also many kinds of seemingly innocent speech which could bring sorrow on someone. However, our tradition is also very solicitous for charitable organizations, and they are often exceptions to the rule. We find a similar situation in secular law, which in many states allows families to put themselves on a "no telemarketing" list but exempts charitable organizations from the prohibition on phoning restricted numbers.

The Talmud makes the following inference from a Biblical verse:

What is the meaning of the verse (Proverbs 27:14), "Who blesses his fellow in a loud voice early in the morning, it is considered as a curse"? For example, someone who is taken in as a guest and treated well, the next day he goes out to the marketplace and proclaims, God bless so-and-so who so exerted himself on my behalf, then people will hear and pressure him. (1)

Revealing someone's private information, in this case that he is a soft-hearted host to strangers, can be a curse since it exposes him to unwanted pressure from other prospective guests, some of whom will not be particularly needy. People are not always thrilled to be praised for their willingness to help strangers.

Soliciting charity in a non-pressuring fashion may be doing someone a favor.

However, the recent authority Rabbi Moshe Feinstein writes that since giving charity is an obligatory mitzvah (commandment), it is always permissible to tell a worthy recipient that a particular person is likely to help them out. The reason is that soliciting charity in a non-pressuring fashion is doing someone a favor, since it gives them an opportunity to fulfill the obligation to give charity. The exception is when the donor explicitly conditions to make his generosity anonymous. (2)

The application of these principles in your situation is open to judgment. You are a legitimate charity organization, and the fundraising materials you send will probably be a modest solicitation letter, which is not as intrusive as the insistent houseguest discussed in the Talmud. Even so, my conclusion is that you should refrain from keeping the recipient's address. In the case discussed by Rabbi Feinstein, the donor himself did something to give the impression that he is interested in giving charity; he gave generously to one recipient who then spread the word. This gives at least some indication that he is content to be recognized as a generous donor. But in your case the recipient took no action at all; it is the donor who sent the card who favored your organization. Furthermore, given the generally high standards of data security held by reputable organizations today, I think the donor has a reasonable expectation that the recipient's address be used only for purposes of sending the card. It is as if the donor stipulated that the address should not be used for fundraising, and in this case Rabbi Feinstein agrees that contact information may not be passed on.

There is also a practical reason to refrain from this practice. Soliciting the recipients is likely to backfire; they are likely to resent solicitations and blame the donor for exposing them. When word gets out donors will refrain from sending condolence cards through your organization so as not to annoy the recipient. This consideration is valid in any context but particularly so in the case of a condolence message; the donor and recipient may feel that they are being taken advantage of at a particularly vulnerable time.

Money and the Meaning Life

Who Owns the Million-Dollar Baseball?