Minority within a Minority 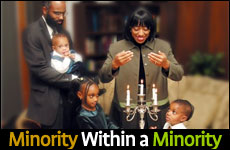 Jews of color and their challenges.

A young African-American woman, who happens to be Jewish, tightens her braids while knotting her scarf. She straightens her colorful African print dress and gets ready to light the Sabbath candles.

The serenity of this Friday evening ritual unfortunately dissipates the next day when she enters the synagogue, encountering the stares and whispers of members of the congregation as they speculate, often within earshot, about her Jewishness.

This is the case for many Jews of color who are weary of having to define and explain their family tree to curious fellow Jews. Most Americans still think of a Jew as someone whose skin is white. The reality, however, is that nearly seven percent (roughly 435,000 individuals) of this country's approximately six million Jews say they are African-American, Asian, Latino/Hispanic, Native American or of mixed race, according to a study by the Institute for Jewish and Community Research.

Many date their lineage to biblical times. Some Jews of color come from African or Middle Eastern lands, while others (or their forebears) were adopted into Jewish families. Some have a Jewish mother or grandmother, or come from converted families. Others credit their embrace of Judaism to curiosity about the Hebrew Bible and an appreciation of Jewish theology and traditions.

Yavilah McCoy is a second generation Jew and represents the fourth generation in a family line of what she calls African-American "seekers of truth" through Judaism. Her great-grandmother was the first in her maternal family line to investigate Judaism and take steps toward Jewish practice. Her grandfather, a civil rights spokesman and labor union leader, emphasized the significance of the African-American struggle for freedom, justice and equality that is deeply ingrained in McCoy's philosophy and message.

McCoy's parents were drawn to Judaism and chose to raise their six children in the Orthodox tradition. She was raised in Crown Heights and other Brooklyn neighborhoods.

Her education reflects diversity. She attended a chassidic elementary school, a Modern Orthodox high school, the State University of New York at Albany and the Hebrew University in Jerusalem. In her career as an English and Judaic Studies educator, McCoy found opportunities to teach in Reform, Conservative, Modern Orthodox and chassidic day schools. 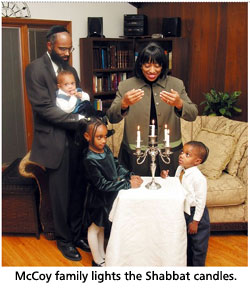 McCoy, who resides in St Louis with her husband, Dr. Pinchas McCoy, and their four children, is the director of Ayecha Resource Organization, a national not-for-profit network that provides networking, advocacy, and support for Jews Organization in the U.S and offers educational resources to rabbis, educators, students, and outreach professionals aware of the need to increase communal appreciation of Jewish diversity.

What are some of the challenges faced by Jews of color?

I don't view being a Jew of color as a burden, but rather as a gift.

Why do you prefer the term "Jews of color" as opposed to "black Jews?"

It binds me to both my own African heritage and the many Jews from different cultures around the world who, historically, have had brown skin. I refer to the Jews of Iraq, Iran, Tunisia, Yemen, Ethiopia, etc. For me, being a black Jew is not an anomaly in Judaism. Being a Jew of color incorporates more than just the color of my skin.

Why is it important to connect to your African culture?

I wish to acknowledge the African-American experience in this country and pay attention to the lessons that can be learned from America's struggle against racism and oppression. I think the level of political and economic comfort that many Jews feel in our current society has allowed them to forget some of the valuable lessons that that struggle has brought to the Jewish people over time.

What is the general black community's reaction to Jews of color?

I'm not comfortable making generalizations. What I can say is that I have met some African-Americans who embrace Jews of color and their history as part of the African-American experience, and who celebrate the diversity of spirituality that has flourished among people of color in America. Unfortunately, the experience of slavery robbed many African-Americans of the ability to choose their own religious practice since Christianity was forced upon us. Those in the black community who know this celebrate Jews of color.

I've met others, however, who have not been so kind. Upon meeting me, they have taken the opportunity to spill out their Christian rhetoric. They tell me I will burn in hell and I need to be saved from damnation. While this is not the case with most African-Americans I've met, there have been instances -- especially when traveling down south -- when being black and Jewish among my fervently Christian sisters and brothers of color has not been comfortable. 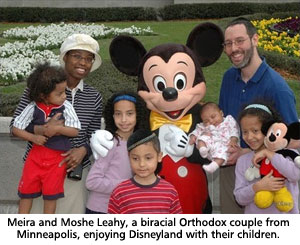 Do you ever get tired of having to explain your Jewishness?

I do get tired, but I manage my energy for the situation by choosing whether or not to answer questions, and when I do, being sure to answer them on my own terms. It took me a long time to figure out that it wasn't my job to prove my Jewishness to the rest of my community.

I didn't mind answering questions from people who genuinely wanted to get to know me and build relationships. But in many cases, I found it extremely isolating to be quizzed by total strangers out of sheer curiosity, as if I were a museum piece for people to gaze at and talk about how fascinating I was, and then walk away and tell their friends. When people want to be friendly and get to know me as a valued part of the Jewish community, it is always my pleasure to engage them in discussion.

Are there Jews of color who have left Judaism due to all the obstacles?

Sadly, many have left Judaism and Jewish practice. This is a shanda [a disgrace]. We don't do enough to bring dark-skinned Jews closer to Judaism.

Are Jews doing enough to include Jews of color in the fold?

I'm not sure the issue is Jews of color being included into the fold as much as the "fold" becoming an environment where all Jews can thrive, serve God, and live with one another in peace.

David Menasse lives in New York where he attends college. He looks like a typical student, hanging out on campus laughing with friends between classes.

But as a Jew of color, he actually lives a very lonely life. Menasse's mother is Jewish but his father is not. He grew up without much religion in his home. He embraced Judaism as a sophomore in college.

One always hears of dating hardships in Jewish circles. Has this been particularly difficult for you?

I'm a Jew and that's all that should matter.

I don't get set up too often and when I do, it's usually with an Ethiopian girl. I don't particularly like this, since I'm American and I would like to marry someone whose family is Americanized. Matchmakers feel that if I'm black and she's black, it's a match. Whenever I hear Ashkenazi singles complain, I get upset because I'm a ba'al teshuvah from a divorced home and I'm biracial. Try selling that to a shadchan!

Why don't you like focusing on your African heritage?

I'm a Jew and that's all that should matter. I don't feel any connection to Africa or other black people. I connect to Jews.

Sometimes, in an attempt to bond, other Jews talk to me about the latest rap song or what's going on with police brutality. That really bothers me because it makes me feel like an outsider. I grew up in Flatbush so I'm just as sheltered from all that as any other Orthodox kid. 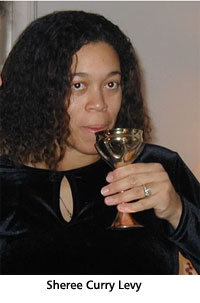 Sheree Curry Levy is a journalist and ethnologist who chronicles stories of black American Jews and other Jews of color.

Levy is a Jew by choice. She became interested in Judaism while a senior in high school after taking a comparative religion course. Studying to become a Jew as a college freshman, she converted to Judaism during her sophomore year.

Levy, creator of BlackandJewish.com, created in 2000 as a way for black American Jews and their friends to communicate, is member of the Alliance of Black Jews and resides in a Minneapolis suburb with her husband and two sons.

How does the rest of your family feel about your conversion?

I'm lucky because they have embraced it fully. It's never been a problem.

Are holidays especially hard on you?

Not at all. I live in a different state from my family, ensuring some distance between us during the major Christian holiday seasons. My mother is very supportive.

Did you find dating and finding a marriage partner difficult?

Not really. My husband and I met at a Chanukah party. I endured the same issues as other singles.

Do your children face any challenges as Jews of color?

They have a regular childhood. They are still young, five and four. Thus, they are not fazed by any of this.

Professionally, has your religious practice been a problem?

What about your community's reaction to you?

Currently, we live in a small community that blends very nicely. Living in Israel for several years was most embracing since once Israelis determine you're not a tourist, they assume you're Jewish and focus on when you're making aliyah.

Are you frequently assumed to be Ethiopian?

No. They have distinct features. Actually, I was once asked in Israel if I was Whitney Houston!

What message do you have for the Jewish community?

People need to stop making assumptions about Jews of color. We are not all converts. It should not be assumed that every Jew of color is a Hebrew Israelite.

Additionally I would like to see Jews of color represented more in Jewish publications and illustrations.

As for converts, the Torah teaches us that we are not supposed to remind a convert of his or her status. Unless someone is a kohen, it's just not relevant.

Reprinted with permission from The Jewish Press
Like What You Read?  Give Jews around the world the chance to experience engaging Jewish wisdom with more articles and videos on Aish. It would make your mother so proud and as a nonprofit organization it's your support that keeps us going. Thanks a ton!

Deborah Lipstadt on Anti-Semitism and the Joy of Being Jewish
Why My Iranian Mother Didn’t Want Me to Become a Religious Fanatic
The Jewish History of Prague
Why the Sexual Revolution was Bad for Women
Comments
MOST POPULAR IN Israel
Our privacy policy
Aish.com Is Looking for Great Writers