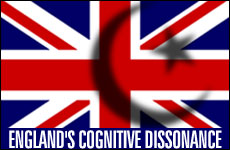 Britons have finally awakened to the fact that they have a serious problem in their midst.

According to a recent Telegraph YouGov poll, 53% of Britons view Islam as a threat to society. The penny has dropped that there might be some connection between last summer's tube bombings and the recently uncovered plot to blow up ten or more planes mid-Atlantic -- and that connection is the religion of the perpetrators or would-be perpetrators.

The average Englishman, it would seem, has a good deal firmer handle on reality than Deputy Commissioner Paul Stephenson of the Metropolitan Police, who described the bombing plot as a "criminal" act having nothing to do with "communities." The most the politically correct Stephenson would concede was that the plotters are "people who might masquerade in the community, hiding behind certain faiths."

qA young English-born couple who planned to blow up one airliner by igniting their six-month-old baby's bottle of formula are not your run-of-the-mill criminals.

No, they are not hiding behind their faith. It is their burning religious fervor that pushes them to act as they do. A young English-born couple who planned to blow up one airliner by igniting their six-month-old baby's bottle of formula are not your run-of-the-mill criminals. And they are not hiding behind their religion. They are products of their religion, and they share the religious fanaticism of all those suicide bombers in Israel, Iraq, and a dozen other places around the globe.

Yet if the average Englishman has begun to grasp the nature of the problem, he continues to remain clueless as to the solution -- a cluelessness of which he is himself dimly aware and which leaves him both uneasy and dangerously vulnerable to a large number of silly nostrums. The susceptibility to such nostrums to heal the deformities of the Muslim soul constitutes cognitive dissonance on a massive scale.

The silliest of those ideas is that Islamic terrorism is an outgrowth of a long check list of grievances, among them the presence of British troops in Iraq and Tony Blair's alliance with the Great Satan (George Bush) and via Bush with the Little Satan (Israel). The prevalence of that explanation is reflected in Blair's plummeting polls: His personal approval rating has fallen to the around 30%.

The more the pity because Blair has shown a remarkably clear grasp of precisely what is at stake in the world today. In an August 1 speech to the Los Angeles World Affairs Council, he described the battle between Reactionary Islam and the West as a battle over values -- a battle between the democratic values of tolerance, freedom, respect for difference and those of reaction, division, and hatred. The goals of Reactionary Islam are twofold. The first is to prevent any Moslem country from moving towards democracy in any form, and the second is to spread the rule of Islam over the entire globe.

In Iraq, said Blair, prevention of democracy has meant pursuing a strategy of sowing chaos. The purpose of Islamic terrorism in Iraq is "absolutely simple: carnage, causing sectarian hatred, leading to civil war."

The same impulse to chaos lay behind Hizbullah's July 12 kidnapping of two IDF reservists and the firing of missiles at nine Israeli border communities. "The purpose," said the prime minister, "was to create chaos, division and bloodshed, to provoke retaliation by Israel that would lead to Arab and Muslim opinion being inflamed, not against those who started the aggression but against those who responded to it."

In Palestine, Reactionary Islam (and this is equally true of the unlamented Arafat and Hamas today) "seeks not the coming into being of a Palestinian state, but the going out of being of an Israeli state."

In his speech, Blair gave justifiably short shrift to the claim that the West bears the blame for Islamic terrorism. He noted that the West did not attack Islam. The destruction of the Twin Towers preceded the American-Anglo invasions of Afghanistan and Iraq. Blair derided those who attribute Islamic terrorism to poverty, pointing out that the avatars of Reactionary Islam are hardly promoters of economic development – indeed, just the opposite.

The global reach of Islamic terrorism, extending its tentacles into "virtually every major nation in the world," said Blair, belies any set of negotiable grievances, and demonstrates Reactionary Islam's ambitions to subjugate the globe.

Home Secretary John Reid was even more blunt, in response to an open letter written by the leaders of the British Muslim community – including MKs and Lords -- to Prime Minister Blair, after discovery of the airliner plot, in which they warned of many more such terrorist plots if Britain did not change her foreign policy in Iraq and Lebanon. Reid rejected the suggestion that terrorists should dictate British foreign policy.

He noted that an Al Qaeda plot to blow up major sites in England was discovered in 2000, long before 9/11 or the war in Afghanistan or Iraq, and that jihadi attacks on the United States began with the seizure of the U.S. Embassy in Teheran, more than two decades before 9/11.

But what is truly striking is that Muslim grandees were so open in placing the blame for Islamic terrorism on the West. Those grandees are sufficiently integrated into British society to know that their demands for changes in British foreign policy would have traction in England. And indeed they have.

British Moslems of Pakistani descent plan to blow up passenger jets, and somehow it is the Jews' fault.

After Sabra and Shatilla, Israeli Prime Minister Menachem Begin remarked, "Goyim kill goyim and the Jews get blamed." We are witnessing something of the same phenomenon vis-a-vis Israel today based on far thinner lines of causality. British Moslems of Pakistani descent plan to blow up passenger jets, and somehow it is the Jews' fault.

A parliamentary inquiry, the Sunday Times reports, has found that "anti-Semitic violence is endemic in England, both on the streets and university campuses." The Community Security Trust reports 92 anti-Semitic incidents in July, three times the normal monthly average. Last week a 12-year-old Jewish girl was stomped unconscious on a London bus while four other passengers and the bus driver did nothing. And an 82-year-old peer, became so incensed during a discussion over Israel's actions in Lebanon that he physically assaulted Lord Janner.

We are a long way past the smart-set talk of Israel's creation having been a lamentable mistake, not worth the price, or even of upper-class twits once again feeling free to say what they really think of Jews. These attitudes have permeated into the British mainstream, which was once known for its stout common sense. The popularity of the London Mayor Ken Livingstone, a long-time Jew baiter, is but one index.

Banners at a London protest of the Stop the War coalition, proudly proclaim, "We are all Hizbullah now." What commonality, one wonders, could left-wing Englishmen feel with fundamentalist Shiites. One fears it is the frisson of identification with the oft-expressed goal of Nasrallah and his Iranian sponsors to wipe Israel off the map. Better that all the Jews gather in Israel, jokes Nasrallah, "it will save us the trouble of going after them on a world wide basis." Who else finds the joke funny?

William Shawcross suggests that Britons have simply become unhinged by the realization that Britain is home today to hundreds of thousands of English-speaking Muslims who despise their native land, and thousands of whom are prepared to take up arms to express that hatred.

In desperation, they grasp at straws and convince themselves that if somehow Israel would just disappear merry olde England would be safe once more. Neville Chamberlain once sold Britons on the idea that offering up Czechoslovakia could secure peace in our time. And today many in Britain view Israel, and perhaps the Jews, as expendable again.

Calling for Israel to be served up on a platter is less frightening than acknowledging the truth: Terrorism is attractive to many Muslims because terrorizing people is the only thing they do well, the only thing that provides them with a sense of power and an escape from their thwarted lives and failed societies.

The Billionaire who Gave Away His Fortune