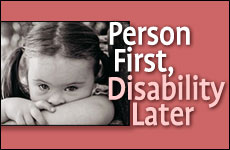 My daughter is a individual, not a diagnosis.

It is Yom Kippur, one-thirty in the morning. A young Jewish couple is in a hospital delivery room, minutes away from becoming first-time parents. Anticipation mixes with the holiness of the night. This child will be another link in the unbroken tradition leading all the way back to Sinai. And then she is born. The parents are elated. But the nurses fall silent; the doctors look uncomfortably at the floor. Because the baby has Down Syndrome. And that young Jewish couple is informed that their daughter, their precious first-born child, is some sort of mistake.

Being Julia's mother meant being her advocate. My job started immediately.

I was the mother on that delivery table. And on that Yom Kippur, in the middle of the night, I learned that being Julia's mother meant being her advocate. My job started immediately. My basic philosophy has remained constant over the past nine years: Julia is a individual, not a diagnosis. She must be given every opportunity to develop her capabilities. She is a full member of the Jewish community, entitled to the birthright of Torah and a Jewish education.

After the reception she got at the hospital, I hoped that the Jewish community would be more welcoming. And generally it was. But there is a lot of fear and misinformation.

The first issue we resolved was that according to Jewish law, Julia was obligated in mitzvah observance. Our rabbi explained that the basic cognitive standard obligating a person in commandments is discerning that a coin is valuable while a rock is not. The issue of whether or not a particular individual is generally obligated to observe the mitzvot is complex and requires consultation with an experienced rabbinic authority.

Yet, many people we encountered were certain that the diagnosis of Down Syndrome, regardless of Julia's capacities, automatically exempted her from mitzvah observance. This damaging misconception could lead to eliminating any need for a Jewish education or for the community to provide that education. As the Passover Haggadah tells us, even if a child has no capacity to inquire, we are obligated to teach him the commandments. The Talmud (Eruvin 54b) relates that the great sage Rav Preida had a student that needed his lessons repeated 400 times. One day, it took twice that. And for those 800 patient repetitions, God rewarded Rav Preida with a long life and granted him and his entire generation the World to Come.

To our great dismay, we also discovered that some confused and frightened parents are advised by their rabbis to abandon their babies with Down Syndrome in the hospital. While it is true that not all parents are capable of raising a child with special needs and that placing a child for adoption is sometimes the only choice, many more parents would take their baby home if their rabbi did not inveigh against it. Too often, these misguided assessments are viewed as a merciful response to the family's fear and misinformation about people with Down Syndrome, and not based on true Torah principles. New parents need support to work through the initial shock of diagnosis. They need time to get to know their baby, to hold her and rock her and sing some lullabies. If given the chance, most parents will realize that they love their baby very much and are quite able to raise her.

Furthermore, there should be no fear regarding marrying off children from a family who has a member with Down Syndrome. The geneticists we consulted assured us that siblings are at no increased risk for having a child with Down Syndrome.

We should not focus so hard on spiritual mysteries that we miss the real person sitting in front of us.

These are profound spiritual ideas. But we should not focus so hard on spiritual mysteries that we miss the real person sitting in front of us. Has anyone ever answered the preschool application question, "Is there anything else we should know about your child?" with "Yes -- he is reincarnated tzadik"? It is far more relevant whether a preschooler can sit in circle time and eat a graham cracker. Julia did fine with both. And she was a very cute singing dreidel in the Chanukah play.

As Julia began to accomplish more and more, it became clear to us that full academic inclusion would be the best thing for her. We did a lot of research and talked to many parents and professionals. When we first approached our neighborhood day school, there were a few awkward moments. Actually, there were a whole lot of awkward moments. But we worked through them. We kept the focus on Julia the little girl, not Julia the "Down's child."

Instead of getting stuck in "what if things go wrong," we concentrated on what we knew she could do right. With optimism, realism and persistence, she made it through kindergarten. And then first grade, second, and third. She took her turn as class chazzanit, wrote a book report on Marco Polo and made a stamp album featuring all seven continents. Now in fourth grade, Julia is an avid reader and enthusiastic Torah student. She does her homework every night. And she loves to eat pizza with her friends.

Many communities have made a lot of progress in school, shul and social inclusion. More and more Jewish schools are welcoming students with Down Syndrome. But the added tuition can be prohibitively expensive. And most communities will not cover the cost, despite several well-known halachic decisions holding that Jewish education for children with special needs is a community obligation. We need to take the next step and make Jewish education a reality for all our kids.

It is true that a person's value is not determined by his or her capabilities, and that we need to appreciate the intrinsic worth of one's Jewish soul. But at the same time, if we really valued people regardless of their limitations, we would do all we can to include Jews with Down Syndrome into community life. Because that is the Torah way.

The Mystery of the Jews
Faith: the Axis Upon Which the Wheel of Science Turns
Love - Not Just About Chemicals Anymore!
Is There a Moral Code in a Virtual World?
Comments
MOST POPULAR IN Israel
Our privacy policy