You Think You're Sick? 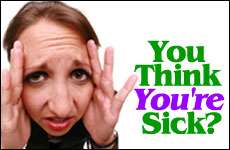 Flu season is over, but I can't shake the feeling I've got some sort of virus – like the Ebola virus.

Spring is officially here and thank God, because during the chilly winter months, it takes no special skill to catch a cold, flu or other virus. Frankly, any hominid hanging around an office or a crowded commuter train could do it. Yet with enough study and practice, one can elevate the mundane and microbial illness to something much higher – even an art form.

What distinguishes the merely phlegmy and rheumy individual burrowed under a fleece blanket and miserably serving out his sickly sentence, from the true antibiotic-dependent artiste? Why, it's only the difference between a Little Leaguer and a Major Leaguer, between a high school garage band and the New York Philharmonic. One is a rank amateur; the other deserving of awe, and perhaps an Oscar for best supporting actor in a viral role.

I began to realize the potential for attention-getting hypochondria long ago, when I worked as a writer for a research university. Although I was (and am) Jewish, I wasn't smart enough to become a doctor. However, I was smart enough (barely) to interview physicians and other scientists, learn about diseases they were studying in their labs, and then scare the living daylights out of the public by writing about these rare, oddball plagues. Each day I discovered another dreaded disease, its symptoms and treatments – when there were any.

Although I was (and am) Jewish, I wasn't smart enough to become a doctor.

This job was more dangerous than working in a coal mine. After all, if you got out of the coal mine alive at the end of the day, you were safe. But in this job, the risks followed me home. I could not sleep at night for fear that the extra hair on my brush was not just a normal follicle shedding, but a case of alopecia areata, a disorder that causes hair to suddenly fall out in giant clumps for no reason. I had nightmares that my blurry vision didn't just hint that it was time to get my glasses checked, but that I had the dreaded Alstrom-Halgren Syndrome, which could lead to my early demise.

Sure, these were rare diseases, but so what? Somebody was going to get them, and Jews were often unjustly picked on throughout history, even by anti-Semitic microbes. For the next year, I carefully examined my hairbrush each morning and evening, looking for telltale signs that I was losing my tresses. I had my eyes checked more often than I got haircuts. You just couldn't be too careful.

I tried to remain calm at work. But one day, while writing about a form of liver tumor that strikes as many as one in 15 million people, but is usually harmless, my worry-ometer went haywire. After all, my great-uncle had something wrong with his liver. Or maybe it was liver spots. Or maybe he hated my grandmother's chopped liver. I couldn't really remember, but liver trouble obviously ran in the family. Unfortunately, my doctor refused to order a CT scan based only on my own wild presentiment of doom. This refusal to authorize the scan naturally added another layer of affliction to my already overworked imagination.

As my portfolio of health care writing grew, so did my arsenal of inner torments. Soon, my desk held not only a stapler, pens and pencils, but also a thermometer, blood pressure cuff, and glucose monitor. Sure, I felt great and went to the gym three times a week, but what if I really had an undiagnosed case of Wandering Spleen, Yellow Nail Syndrome, or any of hundreds of other diseases lurking in the populace that had the words "disorder" or "deficiency" in their names?

When I did catch a cold or flu, I took plenty of days off to ensure that my skin wasn't turning blotchy and my head growing proportionately too big for my body (a sure sign of a congenital disorder whose name had about 43 syllables, most of them consonants). I clutched my box of facial tissues like an alcoholic clenches a bottle of Jim Beam. I compulsively checked for changes in my temperature, wondering if I was also coming down with obsessive-compulsive disorder.

One evening after work, I headed to the medical library on campus, armed with a written list of all my current symptoms. After consulting a 50-pound medical diagnostic manual that caused my sciatica to flare up just from lifting it, I discovered that I had a textbook case of Congenital ‘Fraidy Cat Syndrome.' I knew it: my expanding medical knowledge was slowly killing me.

I had a textbook case of Congenital ‘Fraidy Cat Syndrome.'

Proof that I had a bona fide disorder immediately caused my blood pressure to go down to normal levels. (I checked it immediately, never leaving home without my trusty blood pressure cuff.) Yet I still wasn't sure whether to keep my job. True, it was proving fatal, but at least the health benefits were great, and I could probably sell my university parking permit on eBay for big bucks.

Six months later, surprised to find myself alive and still working out at the gym, I figured I better quit while the going was good. Soon I landed another job for a private research company, specializing in possible cures for hypochondria and other psychosomatic illnesses. Not only did they like my writing samples, but when they saw my glucose monitor and blood pressure cuff, they knew I'd fit right in.

Passover Aftermath
Why My Iranian Mother Didn’t Want Me to Become a Religious Fanatic
The Jewish History of Prague
Why the Sexual Revolution was Bad for Women
Comments
MOST POPULAR IN Jewlarious
Our privacy policy
Aish.com Is Looking for Great Writers