Professors Who See No Evil 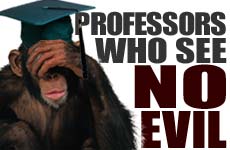 Most college students are being taught that there is no truth, removing debate from the modern campus. The result? Intolerance and closed-mindedness.

A Zogby International poll of college seniors came up with a fascination finding. Almost all of the 401 randomly selected students around the country -- 97 perfect -- said their college studies had prepared them to behave ethically in their future work lives. So far, so good. But 73 percent of the students said that when their professors taught about ethical issues, the usual message was that uniform standards of right and wrong don't exist ("what is right and wrong depends on differences in individual values and cultural diversity"). It's not news that today's campuses are drenched in moral relativism. But we are allowed to be surprised that college students report they are being well prepared ethically by teachers who tell them, in effect, that there are no real ethical standards, so anything goes.

Stephen Balch of the National Association of Scholars, who commissioned the survey, says the results show the dominance on campuses of postmodern thought, including the belief that objective standards are a sham perpetrated by the powerful to serve their own interests.

Some students were not willing to say that the Nazis were wrong, since no individual can challenge the moral worldview of another.

Because of cost constraints, the survey did not ask what the students think of their no-standards professors. Chances are though, that a large percentage of students would score high on moral relativism too, given the atmosphere at colleges today. Several years ago, a college professor in upstate New York reported that 10 percent to 20 percent of his students could not bring themselves to criticize the Nazi extermination of Europe's Jews. Some students expressed personal distaste for what the Nazis did. But they were not willing to say that the Nazis were wrong, since no culture can be judged from the outside and no individual can challenge the moral worldview of another. College students are rarely taught this directly, but they absorb it as part of the multiculturally tolerant, nonjudgmental campus culture. Deferring to the moral compass of mass murderers is a drastic step, even for collegians steeped in moral relativism. But many were willing to do so at a non-elite campus years ago, and since postmodernism is far stronger today in the schools, presumably more would be willing now.

Postmodernists see individuals as products of a specific culture who must guard against the temptation to inflate their own norms into universal standards and dress up their own interests as objectivity. To claim knowledge as universal truth is impossible. There is no truth, just narratives and stories that "work" for particular communities. This belief has turned the study of history on campus into politically empowering, feel-good exercises and provided intellectual justification for the politicization of all studies on campus.

If all beliefs are equally valid, there is nothing to debate. Nothing separates a personal "truth" from self-delusion.

Since "truth" is an act of community empowerment, truth is whatever tribe or the individual says it is. This is why debate and argument have disappeared from the modern campus -- to criticize anyone's ideas is a personal assault, like attacking someone for liking chocolate ice cream. This notion that disagreement is an assault helps explain the venomous treatment of dissenters on campus -- canceled speakers, stolen newspapers, ripped-down posters, implausible violations of hate-speech rules, and many other hallmarks of the modern campus.

If all beliefs are equally valid, there is nothing to debate. Nothing separates a personal "truth" from self-delusion. Cultures can't be criticized for what most of us consider horrendous acts, like the recent sanctioned gang rape in Pakistan of an 18-year-old girl as punishment for her brother's flirting with a woman of high status. Journalist Andrew Sullivan saw an opening to taunt postmodern guru Stanley Fish about this case. Is Fish at least willing to come out against gang rape as punishment? Yes, he says, he is.

If fact, postmodernists are not consistent about their dogma that other cultures are not to be criticized. Particularly on issues of race and gender, postmodernists can be as judgmental as everyone else -- especially when discussions turn to genital mutilation, the jailing or execution of homosexuals, or the Taliban practice of beating women on the street. Similarly, the deeply held belief that all cultures are valid on their own terms is rarely applied to the United States. Perhaps inevitably, however, we have heard a lot of postmodern defenses of the validity of terrorist attacks on the West.

Do parents know what they are paying for when they ship their sons and daughters off to Postmodern U.? Probably not. But the notion that truth is simply a personal preference is often part of what they are buying. NAS said this of its poll: If students leave college convinced that ethical standards are simply a matter of individual choice, they are less likely to be reliably ethical in their subsequent careers. This seems like understatement. The nation is currently outraged about the moral shenanigans of the tycoon class, but it's hard to see how things will improve if we teach the next generation that standards don't exist and moral debate is a personal violation and a sham.

This article originally appeared in US News and World Report.

Science of the Soul

Our Good and Bad Inclinations

Seeing the Elephant
Scientific Curiosity and the Divine Encounter
Mind Over Milkshakes
Love the Convert
Comments
MOST POPULAR IN Spirituality
Our privacy policy
Aish.com Is Looking for Great Writers