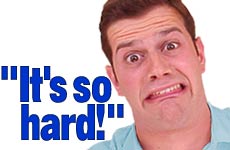 It's today's mantra. But there are times when even super-human effort isn't hard. How do we get over that hurdle?

For 45 years Rebbetzin Chaya Sara Kramer lived in a house with only an earthen floor, without running hot water and without a bathtub or shower. During those years, she raised numerous handicapped and retarded children whose parents had abandoned them on her doorstep.

"It must have been hard," I remarked, sitting across the table from her for another of the interviews I subject her to for the sake of the book I'm writing about her.

"No, it wasn't hard," she replied simply.

"Of course it was hard," I insisted. "At one point you had seven handicapped children you were taking care of, all by yourself when your husband was away half the year. It must have been very hard."

She shook her head. "It wasn't hard," she repeated.

I was annoyed. The Rebbetzin had this maddening habit of turning my reality upside down. I wasn't going to let her get away with it this time.

The Rebbetzin had this maddening habit of turning my reality upside down.

"You had to cook for them, bathe them by heating up water on the stove, change their diapers, before there were disposable diapers, even change the diapers of grown children, keep them from hurting themselves and each other..."

"And do the laundry," she chimed in.

'Yes! The laundry. How could it not have been hard?" I asked petulantly.

"For meals I would just take a big pot, fill it with vegetables or chicken or noodles, and cook it up," she chuckled. "It wasn't hard."

Aha! I had done my research, and now I had her. "Isn't it true," I asked like a wily lawyer, "that Hindele, who lived with you for 14 years, had to be spoon fed? It wasn't just a matter of cooking up the stew and calling, 'Come and get it!' You had to sit and spoon feed her."

I continued my cross-examination, "Were there other children who had to be spoon fed?"

By now her face was shining and she was smiling broadly as she remembered those years. "Yes," she replied simply.

Checkmate! "You had to feed seven handicapped children, and spoon feed more than one of them. Then it must have been hard!" I proclaimed triumphantly.

"No," she shook her head, and repeated, not insistently, just matter-of-factly, "It wasn't hard."

I left her house in a state of total cognitive dissonance. "How could it not have been hard?" I asked Rebbetzin Tziporah Heller, my occasional companion for these interviews.

She thought about it for a minute and replied: "Imagine an athlete, like a tennis player playing his fourth match of the day. The sweat is pouring out of him, he is working every muscle to capacity, he's almost out of breath, but he would describe it as exhilarating rather than hard, because he appreciates that all that effort is his way of actualizing his maximum potential as an athlete. For Rebbetzin Chaya Sara, spoon feeding and changing the diapers of adult children was exhilarating, because it stretched her to her full capacity as a human being. Didn't you see the light pouring out of her face as she remembered it all?"

We live in a society that values ease. It started with the sensible (and blessed) "labor-saving devices." Why go through the back-breaking labor of washing sheets and towels by hand if you could use a washing machine?

No one quite noticed when the "labor" we were so determined to save gradually became any movement of any muscle which took more than half-a-minute. Today no one even questions spending millions of dollars in R&D to develop a "better" product whose only advantage over the previous version is that it saves a few flicks of the index finger.

Who hasn't rejected a worthwhile undertaking only because it was hard? When I was a psych major in college, I expected to go on to graduate school and become a clinical psychologist. Some time during my sophomore year, I discovered that a prerequisite for grad school in psychology was the deadly Statistics 301. As I, Ms. Unmathematical, listened to horror stories of the difficulty of statistics, I cowered. Finally, standing in line for course registration for the final semester of my senior year, I decided that I didn't really want to become a psychologist anyway. I registered for 17th Century English Religious Poetry in the Statistics time slot, and breathed a sigh of relief. My fear of tackling the course in statistics changed the course of my life.

Some people choose not to have children, because they are daunted by the prospect of the 24-hour workday.

No wonder I couldn't understand what Rebbetzin Chaya Sara was talking about. When faced with an undertaking, my inner question is: How hard is it? Her inner question is: Does God want this of me? That's why I see her life as full of hardships, while she sees her life as full of opportunities. For her, it's like winning the grand prize of 30 minutes in the supermarket with all you can grab for free. Of course, she would run down the aisles, reach for the top shelves, bend for the low shelves, and work up a sweat moving as fast as she could. And not for a moment think it was hard.

And that's why, at the age of 76, light shines from her face brighter than any gilded medieval picture of a saint with a halo.

Some years ago I saw a documentary about a whole village that stepped into Rebbitzen Chaya Sara's mentality.

During World War II, in a French village named Le Chambon, the Huguenot inhabitants decided to save Jews. For the duration of the Holocaust, they hid 5,000 Jewish children, more than the entire population of the village. That means that a family of six took in seven Jewish children and "hosted" them for a period of five years.

Think about the effort required to rescue 5,000 Jewish children.

Let's leave aside the issue of the tremendous heroism that these French villagers exhibited. Some people are capable of the great heroic act in a given moment. But think about the effort required to pull this off. The day in and day out effort of feeding, clothing, bathing, and caring for these Jewish children that had to be sustained for five long years. Think about the laundry that that number of "guests" generates, when undoubtedly not one family in Le Chambon owned a washing machine. How many of the children would wake up the whole household for nights on end with nightmares of their final parting from their parents? How many childhood diseases needed to be nursed? How many psychological traumas borne? Think about the fear of being found out and annihilated that they had to wrestle with daily.

One of the Jewish children who was saved, made a documentary film a decade ago about Le Chambon. Bill Moyers interviewed the filmmaker and asked him how did this entire village muster the resolution to do what they did, and to keep doing it for such a prolonged period?

I will never forget his penetrating answer:

"The villagers of Le Chambon understood that effort does not deplete a person. It completes a person."

4 Ways to Strengthen Our Relationship with God

Where Was God in Virginia Tech?
The Grand Mufti of Jerusalem and the Holocaust
The Connection between Israel and the Jewish People
Grit and Torah
Comments
MOST POPULAR IN Ideas
Our privacy policy