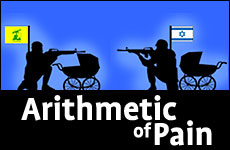 Why Israel's response is reasonable and proportionate.

This is all well and good for democratic nations that deliberately locate their military bases away from civilian population centers. Israel has its air force, nuclear facilities and large army bases in locations as remote as anything can be in that country. It is possible for an enemy to attack Israeli military targets without inflicting "collateral damage" on its civilian population. Hezbollah and Hamas, by contrast deliberately operate military wings out of densely populated areas. They launch antipersonnel missiles with ball-bearing shrapnel, designed by Syria and Iran to maximize civilian casualties, and then hide from retaliation by living among civilians. If Israel decides not to go after them for fear of harming civilians, the terrorists win by continuing to have free rein in attacking civilians with rockets. If Israel does attack, and causes civilian casualties, the terrorists win a propaganda victory: The international community pounces on Israel for its "disproportionate" response. This chorus of condemnation actually encourages the terrorists to operate from civilian areas.

While Israel does everything reasonable to minimize civilian casualties –- not always with success -– Hezbollah and Hamas want to maximize civilian casualties on both sides. Islamic terrorists, a diplomat commented years ago, "have mastered the harsh arithmetic of pain... Palestinian casualties play in their favor and Israeli casualties play in their favor." These are groups that send children to die as suicide bombers, sometimes without the child knowing that he is being sacrificed. Two years ago, an 11-year-old was paid to take a parcel through Israel security. Unbeknownst to him, it contained a bomb that was to be detonated remotely. (Fortunately the plot was foiled.)

This misuse of civilians as shields and swords requires a reassessment of the laws of war. The distinction between combatants and civilians -– easy when combatants were uniformed members of armies that fought on battle-fields distant from civilian centers -– is more difficult in the present context. Now there is a continuum of "civilianality": Near the most civilian end of this continuum are the pure innocents -– babies, hostages and others completely uninvolved; at the more combatant end are civilians who willingly harbor terrorists, provide material resources and serve as human shields; in the middle are those who support the terrorists politically, or spiritually.

The laws of war and the rules of morality must adapt to these realities. An analogy to domestic criminal law is instructive: A bank robber who takes a teller hostage and fires at police from behind his human shield is guilty of murder if they, in an effort to stop the robber from shooting, accidentally kill the hostage. The same should be true of terrorists who use civilians as shields from behind whom they fire their rockets. The terrorists must be held legally and morally responsible for the deaths of the civilians, even if the direct physical cause was an Israeli rocket aimed at those targeting Israeli citizens.

Israel must be allowed to finish the fight that Hamas and Hezbollah started, even if that means civilian casualties in Gaza and Lebanon. A democracy is entitled to prefer the lives of its own innocents over the lives of the civilians of an aggressor, especially if the latter group contains many who are complicit in terrorism. Israel will –- and should -– take every precaution to minimize civilian casualties on the other side. On July 16, Hasan Nasrallah, the head of Hezbollah, announced there will be new "surprises" and the Aska Martyrs Brigade said that it had developed chemical and biological weapons that could be added to its rockets. Should Israel not be allowed to pre-empt their use?

Israel left Lebanon in 2000 and Gaza in 2005. There are not "occupied" territories. Yet they serve as launching pads for attacks on Israeli civilians. Occupation does not cause terrorism, then, but terrorism seems to cause occupation. If Israel is not to reoccupy to prevent terrorism, the Lebanese government and the Palestinian Authority must ensure that these regions cease to be terrorist safe havens.

This article originally appeared in the Wall Street Journal.

Who is Humiliating Whom?
The Blue Beyond
Great Place to Live
Is Eating Supposed To Be Spiritual?
Comments
MOST POPULAR IN Israel
Our privacy policy