Decision of the Heart 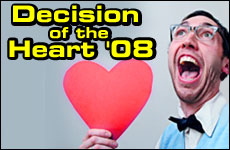 Use the skills you've learned watching election coverage and apply those lessons to your dating life.

Now that Decision '08 is finally here, it's time to shine a light on that other world of imagery, manipulation and empty promises -- the politics of dating.

Decision number one: to throw your hat into the ring. Is it something you can't live without? Are you effective at pretending to be someone you're not in order to attract potential supporters?

What separates you from the other candidates? Why do you deserve the voters' allegiance? Allow me to take over as your campaign manager.

Maybe you've had a string of less than fulfilling encounters with the opposite sex. Great! You have experience. Wear it as a badge of honor, and the false confidence it bestows upon you could bring out the leader in you.

Maybe your less-than-social life up till now has left you feeling a tad rusty. Great! Play down the value of experience. Experience leads to an un-clean slate, easier to poke holes in than a clean one. Instead of voting for all those failed relationships-to-be, you had the foresight to vote against them from the get-go. What are a bunch of notches in a belt compared to good judgment? As for your future clean slate, tell them you aim to change things for the better. How can they not respect the "change" word, unless it's you on a date asking the waiter for some tip money back?

Do you remember when JFK was shot, while your desired "constituency" can barely remember when JR was shot? No problem. Summon a twinkle in your eye and tell them you have no intention of exploiting the youth and inexperience of the more age-appropriate candidates out there. Hey, it worked for Reagan.

During the campaign, it's important to remember -- you're selling yourself as the candidate they'd be most comfortable welcoming into their homes. You need to connect with their hearts, listen to their hopes and dreams -- or at least look like you're listening. You need to show your serious and fun sides, even if you have to stage the fun side like Kerry did. But it's okay to be a flip-flopper. Especially if you change your mind and decide her cat's hairball isn't disgusting after all. But be careful about promising something you may ultimately renege on because she'll accurately recall every word of your earlier failed pledge quicker than Tim Russert.

Be careful about promising something you may ultimately renege on because she'll accurately recall every word of your earlier failed pledge quicker than Tim Russert.

After she agrees to date you, you've secured "the nomination". Congratulations! This is when you can begin moving to the center, and ease off on your earlier campaign rhetoric. i.e.) "There are some occasions where watching TV, rotting on the couch in one's underwear, may be justified."

And what about your constituent/running "mate"? Does she complement you by bringing her own strengths to "the ticket" you may lack? Maybe you're urbane. She's earthy. Worked for JFK/LBJ.

After you've won a few debates (including the one about a pre-nup) she'll hopefully elect to honor your ultimate request for her vote on "Election Day". Come "Inauguration Day" and the reciting of your vows/oath, you've reached your coveted "honeymoon period." Now you can finally throw out your campaign pledges and display your true colors.

As for the state of "the union"... it just may give birth to the most precious gift of all -- the freedom to vote for separate vacations.

Writer, producer and performer Andy Cowan can be reached through his website,anthrosop.tripod.com.
Like What You Read?  Give Jews around the world the chance to experience engaging Jewish wisdom with more articles and videos on Aish. It would make your mother so proud and as a nonprofit organization it's your support that keeps us going. Thanks a ton!

Flying High
Vayelech 5783: Regret and Repent
Rabbi Sacks: Focus On the Important, Not the Urgent
Put Your Foot Down: Are Human Feet Poorly Designed?
Comments
MOST POPULAR IN Jewlarious
Our privacy policy
Aish.com Is Looking for Great Writers