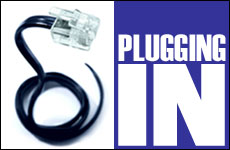 When was the last time you were fully alive in the moment?

We've all seen them: the teenager who breezes into the house with a cell phone attached to her ear, chatting animatedly into the phone while treating the people around her like so many sticks of furniture...

The video-game addict hunched over his computer monitor or hand-held electronic game, an invisible wall between him and the rest of the world...

The businessperson at lunch time -- be it in an upscale restaurant or a hot-dog stand -- chewing mechanically but tasting nothing while focused on his laptop...

The power-walker communing with her iPod, eyes glazed. She might as well be walking through a desert for all the notice she takes of the scenery or the humanity around her...

They are plugged in.

I plead guilty to an addiction of my own. Washing the dishes automatically means reaching for the Walkman or MP3 player. Folding laundry or preparing supper, ditto. In a world that seems to be moving faster all the time, it makes sense to do two things at once, right? Or three, or four, if you can manage it...

The trouble is, when you do that you're only giving a part of yourself to each thing. And not necessarily the most conscious part.

Some years back when my older children were little, I made an astonishing discovery: I was not really looking at my kids. They would trot after me as I whirled through the house in my race to get things done, speaking at my back or profile, and receiving my answers in the form of a hurried sentence hurled over my shoulder.

When I realized this, I decided to do a really amazing thing. I decided to stop. To meet my child's eye. To communicate face-to-face, and not over the shoulder.

I was doing something. I was standing still and listening to my child.

It took enormous self-control. At first, impatience would bubble up and the well-worn messages din in my ear: "You're wasting time. You've got so much to take care of. Don't just stand there -- do something!"

But I was doing something. I was standing still and listening to my child. She might not have had anything of particular importance to share. He should have been able to condense his story into a fraction of the time it took to relate it. But they were my precious charges, and they had something to tell me. And I was offering them the basic respect of showing them that they were important enough to deserve having me stop and listen to them tell it.

Fans of meditation like to talk about "mindfulness." Living mindfully means that when you're talking to your kids -- you're just talking to your kids. That's all. When you're driving your car, you're feeling the pedal beneath your foot, and the wheel against your palms; you're seeing what there is to be seen through the windshield. Really seeing it. It means being fully alive in the moment. It means noticing the tiny details of your surroundings, of your own actions. It means being there.

Perhaps that's why the great spiritual figures of Jewish history were often shepherds. The very nature of the job calls for complete immersion in the moment. You can't tend sheep and stare into a computer screen at the same time, or one of the little lambs is liable to wander off and leave you with a lot of explaining to do to the boss.

Abraham, Moses, King David -- all began their careers as humble shepherds, alone in the vastness of nature with the creatures they were pledged to protect. Their characters were shaped by solitude. They asked big questions and searched for answers big enough to encompass them. Because they were alone, and because they were as fully present as it is possible for a person to be, they opened themselves up to the possibility of God. There was no cell phone to distract them, no Palm Pilot to remind them of their appointments. There were no appointments. No digitally-stored music, either -- only the music of the wind sighing through the grass on which their sheep were dining.

Others walked past a strange phenomenon in the desert with no more than a vacant, fleeting glance. It was Moses who stopped, who noticed that a bush was burning but was not being consumed. And who was free to have a conversation with God that would alter history and change the face of the world forever.

I'm not advocating that we all drop what we're doing and take out an option on a flock of sheep. I am a product of our electronics age and enjoy its many conveniences as much as the next person.

But I do urge a certain level of life-enhancing mindfulness in this "plug-yourself-in" age of ours. Tend your sheep. Make eye contact with your kids. Slather just the right amount of mustard on your hot dog and savor each bite.

And keep your eyes open: Who knows? There may be a miracle lurking nearby, just waiting to be noticed.

Libby Lazewnik has written numerous books and short stories for both children and adults, published by ArtScroll, Targum Press and Feldheim. She also edits, translates and teaches the occasional class on the fine points of creative writing. She finds food for thought and literature in just about everything. Libby lives in Baltimore with her husband and children.

Love Your Neighbor
What Makes Eli Run?
The Tyranny of Materialism
Science Enters the Mysterious Inner World of Consciousness
Comments
MOST POPULAR IN Current Issues
Our privacy policy