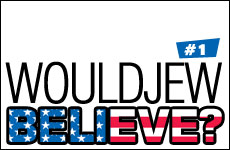 Quick! When you think of the word "hairdresser," what leaps to mind? "Cream rinse?" "Blow dry?" "Oy dahling, who ‘did' you last? Edward Scissorhands?" How about "Hero?" "Soldier?" "Spy?"

The last three describe the recently revealed background of the most famous hairdresser, and hair products entrepreneur in the world, Vidal Sassoon. At age 17, while apprenticing for a hairdresser in London, life was happy for the young Jewish boy, until, after WWII, Oswald Mosley, founder of the British Union of Fascists was released from confinement, and again, stirred up virulent anti-Semitism. Saying "Never again," Sassoon joined the paramilitary 43 Group that used organized violence to disrupt Mosley and his Blackshirts. Then, in 1948, he fought in the Israeli War of Independence. He wanted to remain in Israel, but his family's poverty forced him back to London– and hairdressing, where he vowed to be the best he could be. He succeeded. Sassoon amassed a 100 million dollar fortune, and funds the Vidal Sassoon Centre for the Study of Anti-Semitism and Xenophobia at the Hebrew University, Jerusalem. The lesson? Mamas, let your sons play with sharp instruments!

We've all heard that old (ugh) joke: "What's the world's ‘thinnest book?' Jewish athletes." Well, one frustrated Jewish baseball card collector wanted to change all that. In 1999, Martin Abramowitz wanted his set to include the "gantseh" – all pro Jewish ball players. Sure, there's Koufax, Greenberg, Green, Rosen, Yeager, and Lipman Pike the first Jew to play pro baseball in the 1870s. But Abramowitz found that many Hebrew Hitters like Phil Weintraub, Sid Gordon, Donald Fehr, Harry Danning, Larry Yellen, Norm and Larry Sherry, and Jose Bautista, weren't "carded." So in 1993, Abramowitz unveiled the very first set of Jewish Baseball cards. Interestingly, he found that Jewish players historically have a higher collective batting average, and pitchers, a better win-loss record when compared with Gentile players. That doesn't include those Jewish athletes who opted out of baseball and decided to go into sports medicine instead.

Uncle "Adolph?" The very thought could bring on a massive Eczema attack. It did and more, for at least some of Hitler's kin. William Patrick Hitler, a nephew of the fuehrer, spent his early years in England, then moved to the U.S. He's dead, but as of 2000, his three sons, Alex, Louis, and Brian were reportedly living in obscurity on Long Island, New York. They not only dropped the Hitler name, but made a pact never to marry or procreate – keeping the world "racially pure" of Uncle Adolph's evil DNA. Long Island's Jewish community however has experienced a population explosion in recent years. History has wonderful sense of irony, doesn't it?

IT'S A MAD MAD MAD YIDDISH

From its inception, the irreverent spoof mag, "MAD," with its impressive stable of Jewish writers, made hysterical (if not subversive) use of fractured Yiddish and Yiddishisms. In addition to sprinkling their pages with words such as "hoo-ha!" and "furshtunkener," a gem appeared in the premiere issue (1952) titled "Ganefs (Thieves)." The strip by Harvey Kurtzman and Bill Evans, that spoofed "King Kong," had explorers asking the Ookabala-ponga natives, "Vos machst du?" ("How're doing'?"). A hit with junior America, "MAD" spread the Yiddish word. I wonder how many Iowa moms were "famisht" when they lovingly served pastrami on white, and their Beaver Cleavers cried, "Bist meshugeh?!"

Jews are smart. But how smart is too smart? Appropriately enough, on April 1, 1898, William James Sidis, child prodigy, and perhaps the most brilliant human in history, was born to highly educated Russian Jewish immigrants. At 18 months, the boy genius could read The New York Times, by eight, after mastering eight languages, he developed his own, "Vendergood, then entered Harvard at eleven, and lectured at Harvard's Mathematical Club, at 12.

So how come from him, there's no "Sidis Theory of Black Holes?" or "The Sidis equation: E= (something)"? The smartest human, may have also been the first slacker. In 1919, he did participate in a socialist May Day parade -- that turned into a riot. Daddy arranged for him to go to sanatorium instead of jail. Thereafter, he lived in relative solitude, writing (often under a pseudonym), original treatises on many subjects, including astrophysics, history, Native American studies, government, economics, and politics. He died at 46 of a cerebral hemorrhage.
Perhaps the human brain, for now, isn't equipped to handle his IQ, estimated at between 250 and 300! So next time, papa says, "Don't get smart with me," the dear man just wants to make sure you make a living – and your head doesn't explode.

STAR OF DAVID: THE POWER OF TWO TRIANGLES

A number of fact-hunters with keen powers of observation, have claimed that all 22 letters of the Hebrew Alphabet can be found and traced within the shape of the triangles in the Star of David. Try it! You might just make a fortune creating a new puzzle – Jewdoku.

Boo!
In the Shadow of David and Goliath
Where Do the Laws of Nature Come From?
Saadiah Gaon, Rashi and Maimonides: How Three Rabbis Revolutionized Judaism
Comments